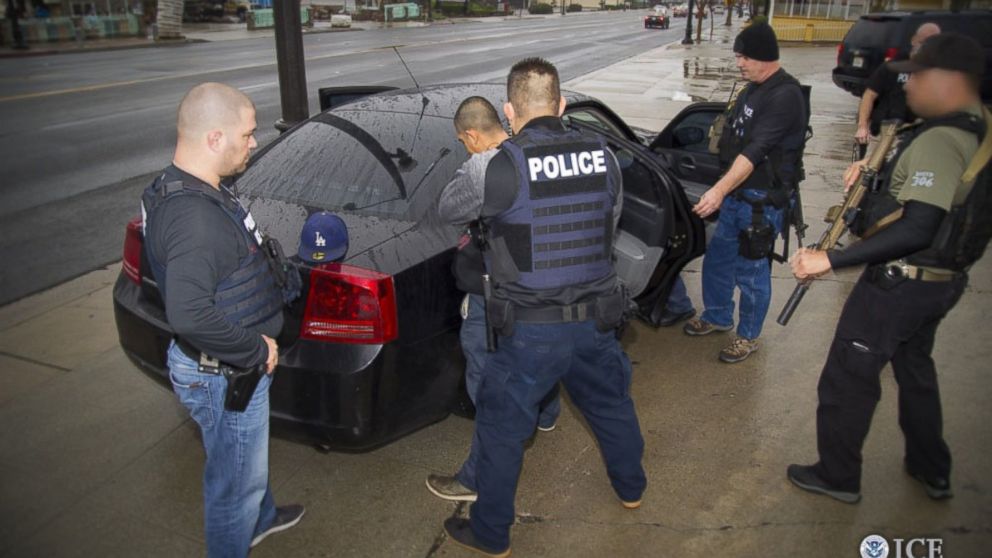 Kelly said the arrests were part of a series of enforcement operations across the country targeting "public safety threats" as well as "individuals who have violated our nation's immigration laws." Those arrested included some who had re-entered the country after being deported and others whose deportation had been ordered by an immigration judge.

About three-quarters of those arrested had been convicted of crimes including homicide, sexual abuse, child abuse, drug trafficking, battery, assault, DUI and weapons charges, according to the Homeland Security Department. The immigration raids occurred around the country, including in Georgia, the Carolinas, the Los Angeles area, New York area, Austin, Texas, which is part of the San Antonio ICE region, and six Midwestern states.

The arrests sparked outrage among immigrant advocates, who accused the immigration agency, known by its acronym ICE, of changing its deportation policies and carrying out random sweeps in the wake of President Trump's rhetoric on immigration and feared policy shifts.

Trump made immigration enforcement and border security pillars of his campaign, calling for a "deportation force" and telling supporters that he would get the "bad hombres" out of the U.S.

However, ICE officials said that the targeted enforcement actions last week were routine and that planning for them began weeks ago, before the president signed his executive order on immigration enforcement on Jan. 25. The order's stated aim is for the federal government "to employ all lawful means to enforce the immigration laws of the United States."

"We cannot faithfully execute the immigration laws of the United States if we exempt classes or categories of removable aliens from potential enforcement," the order says.

It is not immediately clear what impact the order will have on future immigration enforcement, targeting and deportations. ICE officials declined to discuss the impact and did not immediately provide further guidance.

A look at the numbers

The largest number of arrests last week were carried out across the Midwest -- in Illinois, Indiana, Wisconsin, Kentucky, Kansas and Missouri. Of the 235 people arrested in this region, 163 had criminal convictions, 60 had been previously removed from the U.S. and the remaining 12 had outstanding final orders of removal.

In the Carolinas, ICE arrested 190 people, of whom 127 had criminal convictions.

Of the 161 arrested in the Los Angeles area, 151 had prior criminal convictions, including an Australian with a conviction for "lewd and lascivious acts with a child" and a previously-deported Honduran with prior convictions for drug trafficking, spousal battery, and petty theft.

"This operation that we conducted is on par with similar operations that were done in the past," David Martin, director of ICE's Los Angeles field office for enforcement and removals, said in a conference call Friday.

A complete breakdown of the criminal offenses and nationalities of the more than 640 arrested nationwide was not immediately made available.

What critics are saying

Lawmakers, immigrant rights groups and worried families raised concern over the arrests as they took place last week, with many voicing skepticism that the ICE actions were "routine."

While some regional immigration enforcement offices released details of the operations last week, the Department of Homeland Security released its first national information on the raids today.

Earlier Monday, Sen. Chuck Schumer (D-NY) called on ICE to provide information about the location of the raids and details of people who were arrested.

"Reports that Immigration and Customs Enforcement (ICE) targeted nonviolent immigrant families over the past week are deeply disturbing. Undocumented immigrants live in fear, and they are confused and scared. I am troubled by the lack of transparency and potential due process violations surrounding ICE's most recent enforcement actions," the New York senator said in a statement.

"How many states were affected? And I want them to give me evidence that demonstrates that this was not coordinated and not a lot a lot of collateral apprehensions," Lujan Grisham said.

The congresswoman said she doubts the administration's defense that the arrests were made for national security.

"This feels more like a huge shift in policy to get to, 'I want to deport 11 million people,' and we're going to do everything in our power to stop that," she said.

The Coalition for Humane Immigrant Rights (CHIRLA) said last week that that it got multiple calls from worried attorneys as the immigration operation picked up speed in the Los Angeles area.

"What happened last week in 55 communities in Southern California was different and not business as usual. We stand by our commitment to keep our community informed and alert," wrote CHIRLA in a Facebook post Sunday.

In Phoenix, seven protesters were arrested Wednesday outside of the ICE facility while demonstrating against the apprehension of a Mexican-born woman who was later deported.

The American Civil Liberties Union told ABC News on Sunday that it plans on creating a "rapid response team" to combat a potential rise in deportations under the current administration. ACLU senior attorney Lee Gelernt told said that while they were "not pleased" with Obama's handling of deportation raids, his group is concerned that the Trump administration will expand those efforts.

Is it different than under the Obama administration?

President Trump tweeted Sunday that the "crackdown" is in keeping with his campaign promises.

The crackdown on illegal criminals is merely the keeping of my campaign promise. Gang members, drug dealers & others are being removed!

- Donald J. Trump (@realDonaldTrump) February 12, 2017Kelly said Monday in the statement, "President Trump has been clear in affirming the critical mission of DHS in protecting the nation and directed our department to focus on removing illegal aliens who have violated our immigration laws, with a specific focus on those who pose a threat to public safety, have been charged with criminal offenses, have committed immigration violations or have been deported and re-entered the country illegally."

ICE's focus on people viewed as posing a "threat to public safety" is similar to enforcement guidance under Obama. But it's not clear how this guidance will be carried out on an operational level with the new administration.

In 2014, the former Homeland Security Director issued a departmentwide memorandum calling for "prosecutorial discretion" so that the focus in immigration cases would be almost exclusively on criminal aliens, and clarifying the department's enforcement priorities -- national security, border security and public safety.

The memorandum was not purely humanitarian as there are resource concerns -- such as around the amount of space available for detentions and the capacity of immigration courts -- for focusing on public safety and national security threats, according to ABC News contributor and former top Department of Homeland Security official John Cohen.