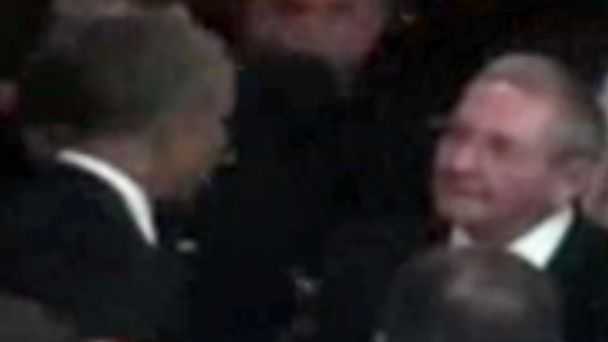 President Obama and Cuban President Raul Castro shook hands in Panama Friday night - the first time the two men have seen each other since restoring diplomatic ties between the U.S. and Cuba in December.

The White House confirmed the brief encounter between Obama and Castro at the Summit of the Americas.

"At the Summit of the Americas this evening, President Obama and President Castro greeted each other and shook hands," Bernadette Meehan, National Security Council Spokesperson, said.

A White House official said the interaction was informal, and there were no substantive conversations between the two men.

The historic handshake came one day before Obama and Castro are expected to meet on the sidelines of the summit. This is the first time Cuba has ever been invited to attend the gathering.

The summit began Friday night, when President Obama and President Castro attended the Inauguration ceremonies. The U.S. and Cuban presidents sat close to each other with only two leaders sitting between them.

But it may be soon surpassed by the highly anticipated, face-to-face, bilateral meeting between U.S. President Obama and Cuban President Raul Castro expected to take place Saturday.

Castro and Obama arrived within minutes of each other at the same military air field in Panama Thursday night for the Summit of the Americas. Shortly after arrival, the two presidents spoke by phone, according to a Facebook post by Jorge Leganoa, the deputy director of Cuba's state-run National Information Agency. According to the post, the call came "minutes before" the meeting between Kerry and Rodriguez.A White House Official confirmed to ABC News that a call occurred, but said it actually happened earlier.

The call marks the second time the two leaders spoke by phone. The first lasted approximately 45 minutes and occurred shortly before a Dec. 17 announcement that began the restoration of diplomatic ties between and the U.S. and Cuba.

The summit is the seventh chief-of-state-level gathering among North, Central and South American countries, but the first to include Cuba, which had been previously blocked from attendance by the United States.

The talks come as the U.S. State Department delivered its review of Cuba's status on the states-who-support-terrorism list to the White House.

The review was delivered to the White House Wednesday, according to sources, and is in the president's hands. It recommends Cuba be removed from the list, as President Obama hinted in Jamaica Thursday.

"Throughout this process, our emphasis has been on the facts," Obama said in Jamaica. "We want to make sure that, given this is a powerful tool to isolate those countries that genuinely do support terrorism, that when we make those designations we've got strong evidence that's the case, and as circumstances change that list will change, as well."

President Obama could announce his decision while at the summit and is only awaiting sign-off from cabinet members who oversee national security, according to White House sources.

The terror list has been a major hurdle for the Cuban government, which wanted it lifted before full diplomatic ties are restored. Both countries are expected to announce the opening of embassies and an easing of travel restrictions for their diplomats soon.

Get real-time updates as this story unfolds. To start, just "star" this story in ABC News' phone app. Download ABC News for iPhone here or ABC News for Android here. To be notified about our live weekend digital reports, tap here.