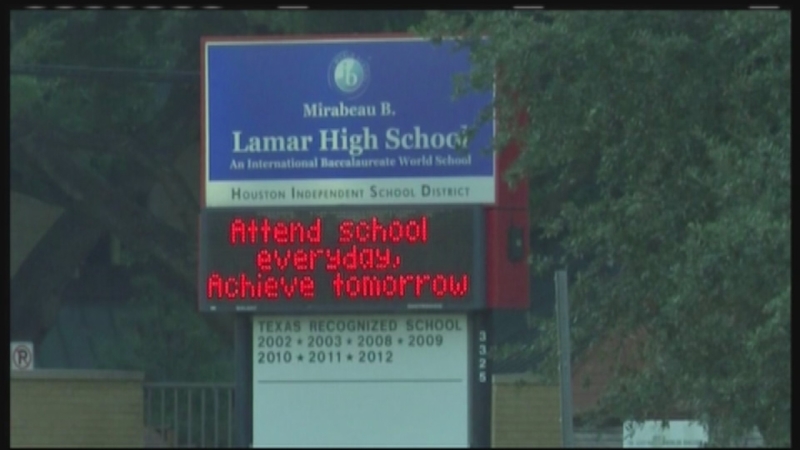 HOUSTON (KTRK) -- The Houston ISD Police Department says a 16-year-old student is facing charges over a threat made against Lamar High School on Twitter.

The student is accused of making terorristic threats. The charges come after a user posted on Twitter that they were "shooting that (expletive) up" and were "taking it out on everyone."

Half an hour later, the user then posted a photo of Lamar High School with the word "burn" followed by a third tweet saying "everyone burnnnn #11:30am."

Lamar's administration, HISD police, and HPD are aware that threats were made via social media late yesterday. We take these threats very seriously and have been working closely with the authorities to identify where these threats are coming from. Both HISD police & HPD will have strong presence on the Lamar HS campus today to ensure students feel safe. As we know more, we will provide updates.

Eyewitness News determined the Twitter account in question was created five days ago and the first post tweeted, Wednesday night at 7:56pm. All of the tweets were posted within an hour's time and since then, no other posts have been made.

At Lamar High School, parent Ann St. John said today she was afraid to drop off her daughter.

"I'm scared to death," she told Eyewitness News. "I just told my daughter, 'I think all the high schools should have metal detectors.' It's just getting horrible. I told her text, be smart, duck and text me if there's any problem."

She wasn't the only parent on edge. About one-third of the student population skipped school Thursday because of the threats.

HISD Police Chief Robert Mock said the threat is likely a prank, but they weren't taking any chances.

"We've got extra personnel here. Everybody's on alert," Mock said. "...Unfortunately (it's) probably some kind of ploy or tactic to disrupt the school."

Raul Martinez, a senior at Lamar High School, said, "Whether it's credible or not, doesn't really matter, it's still a threat, you should still think about it, take it serious."