WPVI
LANSDALE, PA -- In an investigation by ABC station WPVI, journalists caught two employees of a local food pantry stealing food for themselves:

A tipster told the team about one worker at Manna on Main Street in Lansdale, PA.

According to that tipster, the worker was bragging that he hadn't been grocery shopping in years, because he was taking food for himself right out the charity's back door.

That employee, Scott Lukens, was caught by WPVI's cameras stocking up for a winter storm on Friday, March 20th - a storm that dumped eight inches of snow on the area.

We watched as he took a bag, loaded it up with food, and put the items in his personal truck - four times.

"If he was there for needy people, he wouldn't steal from them," the tipster said, who did not want to be identified.

On March 26th, the team waited as Lukens arrived at work around 1:45 p.m. empty-handed. But a few hours later, he walked out with a sack full of stuff.

Again, on March 30th, hidden cameras caught him leaving with a bag in his hands.

April 2nd was a big shopping day for him. After taking in donations off his truck, Lukens decided to take something for himself. He put a black bag into the back, next to another plastic bag already left there.

He returned a second time and put a box in the truck bed and again a third time to put another box of bulk food up front.

"I think he puts himself above needy people. He was taking the turkeys at Thanksgiving time like they were free," the tipster said.

The tipster says he complained to management but nothing happened.

"I witnessed families being turned away with little children. That's when I said, 'You know, I need to do something about it,'" the tipster said.

When we confronted him and asked what was in his bag, Lukens bolted for the door. The hidden cameras found boxes of Golden Grahams, a bulk box of juice and bags of canned foods that were supposed to go to Manna on Main Street clients.

He fled to the freezer and tried to slam the door shut, but not before we saw Lukens dumping three bags of shrimp.

Lukens wasn't the only one we caught on camera. Manna on Main Street officials confirm another employee, who the team recorded taking boxes of sodas and drinks, also confessed to stealing from the pantry.

"When we learned of the incident, we immediately did an internal investigation, we took this seriously," said Manna on Main Steet's Executive Director, Susan Gould.

Manna on Main Street's executive director says Lukens confessed and was immediately terminated. However they wouldn't tell the station what happened to the other employee - citing personnel confidentiality. 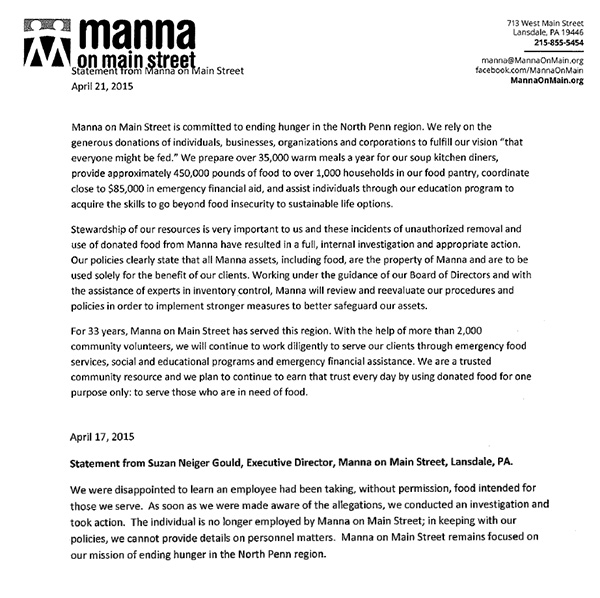 They also say they are now building safeguards to make sure this doesn't happen again.

"We will be working with an expert in inventory control, so that we know we are doing a good job, being good stewards of everything that is given to us," Gould said.

We asked Manna on Main Street if they were taking any criminal action against the employees, but they refused to share that information with us.

We also contacted Lukens again. His only reply was "No comment."