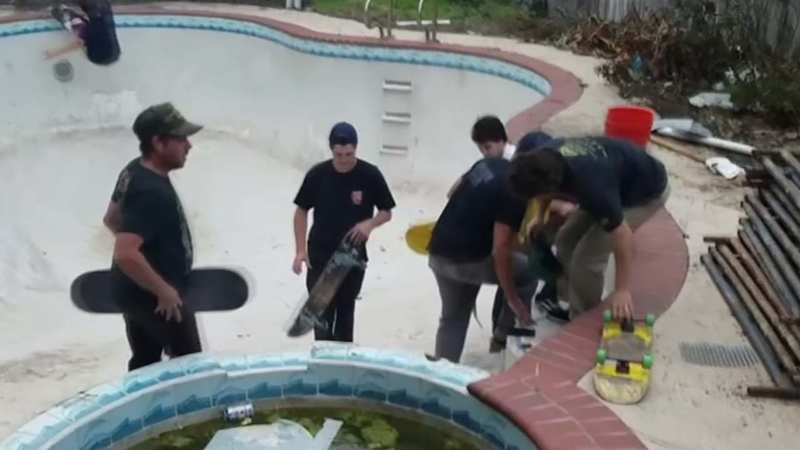 Homeowner catches group using his pool as a skate park

HOUSTON (KTRK) -- A Meyerland homeowner says a group broke into his property, but they didn't steal anything.

Instead they used his pool, drained the water and turned it into a skate park.

"I got you guys on camera, I've called the cops!" the angry voice jumps out from the cell phone video.

One look at the video and you can certainly understand why.

A Meyerland homeowner, who does not want to be identified, caught a group of skaters using his backyard pool as their own skate board park.

"I hope people see the video and somebody knocks some sense into their heads, and say, 'Hey, stop doing it somebody's property,'" the homeowner told ABC13.

Last Saturday, surveillance video from a neighboring house captured a grey Ford F-150 pulling up to the Meyerland home still under construction.

The group of skaters, with their boards, jumped out of their truck, and wandered into the construction zone.

Once inside, they begin to zip and zag through the home's backyard swimming pool.

The homeowner says it's the third time that it has happened to his house in as many months.

He purchased padlocks, but says it's difficult to secure a construction site.

In addition, the video clearly shows the men brazenly using the pool.

The homeowner suspects they came to the home a few days prior to drain whatever water was left inside, and then returned to use it.

"These are at least 25 years old and above. There's nobody who's a high schooler or a teenager," he said.

The homeowner also captured video of himself chasing after the skaters. Some jumped a fence, while others quickly ran to the Ford truck.

On the video, a man is seen using his skate board to cover up the truck's back license plate as it sped off.

When we showed the video to skaters at a north side park, they weren't surprised by the shenanigans.

Skating through empty pools first became hot in the 1970s.

YouTube is filled with videos of skaters showcasing their moves in empty pools. It seems these days, only the trespassing part of the trend has waned.

"Swimming pool skateboarding is actually what I'm into," says skater Matt Ulrich. "But not breaking into people's backyards and stuff."

The homeowner has filed a police report with Precinct 5 Constables Office and if they're seen near the house again, watch out.