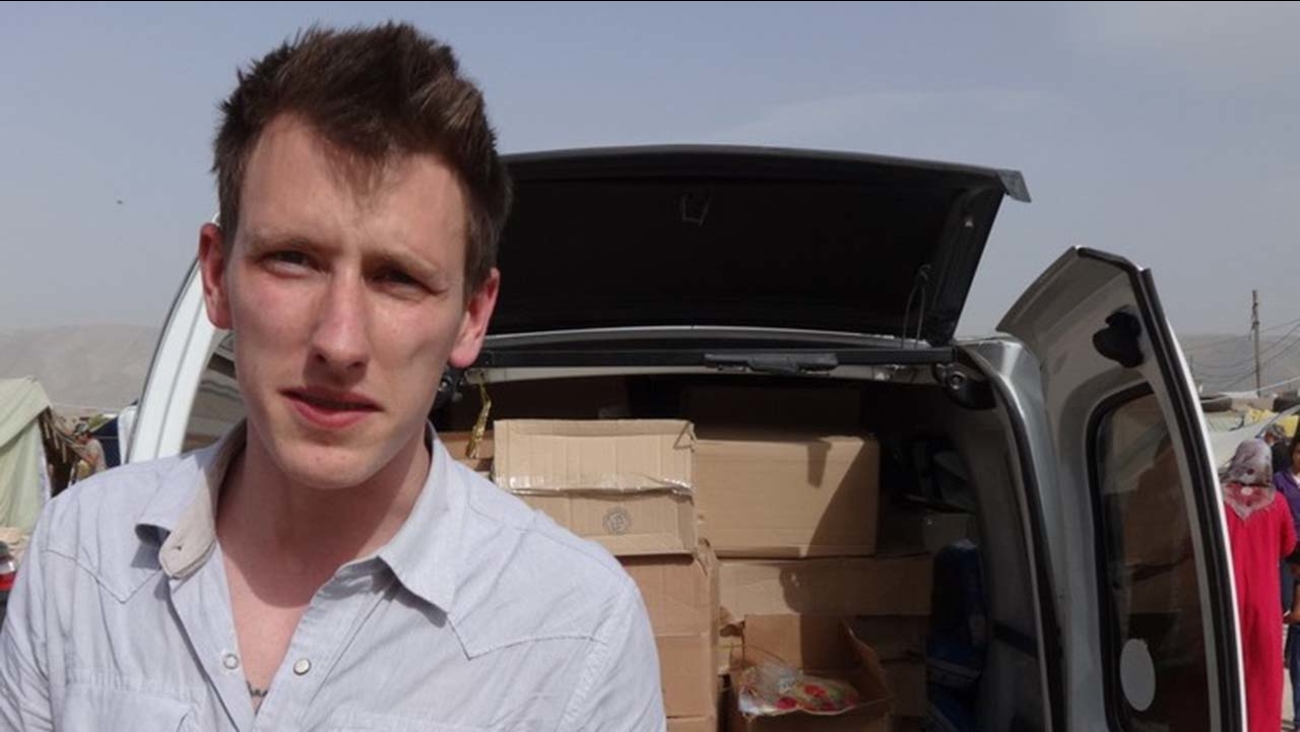 BEIRUT, Lebanon -- The Islamic State group released a graphic video on Sunday in which a black-clad militant claimed to have beheaded U.S. aid worker Peter Kassig, who was captured last year.

The militant was standing over a severed head, but it was not immediately possible to confirm that it was Kassig, 26, who was pictured in the video. U.S. officials said they were working to determine the video's authenticity and the Kassig family said it was awaiting the outcome of the investigation.

The video, which was posted on websites used by the group in the past, appeared to be the latest in a series of blood-soaked messages to the U.S. warning of further brutality if it does not abandon its air campaign in Iraq and Syria.

"This is Peter Edward Kassig, a U.S. citizen, of your country; Peter who fought against the Muslims in Iraq, while serving as a soldier," the militant says near the end of the nearly 16-minute video. He speaks in an audible British accent despite his voice being distorted to make it more difficult to identify him.

The video identifies the militant's location as Dabiq, a small town in the northern Syrian province of Aleppo, near the Turkish border.

The video also shows what appears to be the mass beheading of several Syrian soldiers captured by the group. The militants warn that U.S. soldiers will meet a similar fate.

"We say to you, Obama...you claim to have withdrawn from Iraq four years ago," the militant said. "Here you are: you have not withdrawn. Rather, you hid some of your forces behind your proxies," he said, apparently referring to Western-backed Syrian rebels, Kurdish fighters and the Iraqi military.

"Here we are, burying the first American crusader in Dabiq, eagerly waiting for the remainder of your armies to arrive."

Kassig, a former U.S. Army Ranger, was providing medical aid to Syrians fleeing the civil war when he was captured inside Syria on Oct. 1, 2013. His friends say he converted to Islam in captivity and took the first name Abdul-Rahman.

Previous videos have shown the beheading of two American journalists and two British aid workers. The latest video did not show the person identified as Kassig being beheaded. Unlike previous videos, it did not show other Western captives or directly threaten to behead anyone else.

The group also holds British photojournalist John Cantlie, who has been shown in several videos delivering long statements in English on the group's behalf, perhaps under duress.

Kassig's family said in a statement they were aware of the reports of the video and were awaiting confirmation from the U.S. government.

"We prefer our son is written about and remembered for his important work and the love he shared with friends and family, not in the manner the hostage takers would use to manipulate Americans and further their cause."

The White House said the U.S. intelligence community was working to determine the authenticity of the video. National Security Council spokeswoman Bernadette Meehan said that if the video is authentic, the White House would be "appalled by the brutal murder of an innocent American."

Kassig formed the aid organization Special Emergency Response and Assistance, or SERA, in Turkey to provide aid and assistance to Syrian refugees. He began delivering food and medical supplies to Syrian refugee camps in 2012 and is also a trained medical assistant who provided trauma care to wounded Syrian civilians. His friends say he helped train 150 civilians in providing medical aid.

The Islamic State group has beheaded and shot dead hundreds of captives -- mainly Syrian and Iraqi soldiers -- during its sweep across the two countries, and has celebrated its mass killings in a series of slickly produced, extremely graphic videos.

The group has declared an Islamic caliphate in the areas under its control in Syria and Iraq, which it governs according to an extremely violent interpretation of Shariah law.

The U.S. began launching air strikes in Iraq and Syria earlier this year in a bid to halt the group's rapid advance and eventually degrade and destroy it.

The fight against the militant group adds another layer to Syria's complex civil war, now in its fourth year, which began as an uprising against President Bashar Assad.

The Islamic State group emerged from the remains of al-Qaida in Iraq and spread to Syria, where it battled both government forces and rebel groups as it carved out its self-styled Islamic state.

In June the group swept into northern Iraq, capturing about a third of the country, including the second largest city Mosul, and eventually prompting the U.S. to resume military operations in the country less than three years after withdrawing. In September the U.S. expanded the air campaign to Syria.
Related topics:
isisbeheading
Copyright © 2020 by The Associated Press. All Rights Reserved.
More Videos
From CNN Newsource affiliates
TOP STORIES