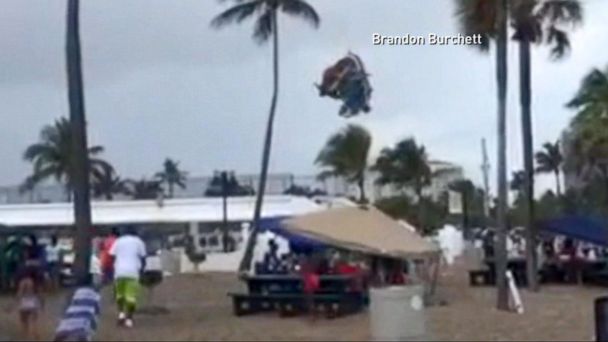 ABCNews
By EMILY SHAPIRO
The city of Fort Lauderdale and a bounce house vendor may face legal action on behalf of an 11-year-old boy injured in a Memorial Day bounce house incident.

Notice letters sent Wednesday from the law firm of Cohen and Cohen to the city of Fort Lauderdale and All Star Events say "due to the negligence in the control, maintenance and/or operation" of the bounce house, an 11-year-old "sustained severe and permanent injuries."

The letters say the city and company have 30 days to reply.

Fort Lauderdale Mayor John Seiler called the incident "a freak act of nature that no one could have prepared for or predicted."

Seiler said in a statement: "The change in weather was sudden and severe. An intense waterspout came ashore rapidly and without warning, bringing forceful winds that meteorologists have estimated were between 65 and 85 miles per hour. Its powerful unpredictable path knocked down street lights and destroyed a cement basketball support structure."

The city said it has already put the bounce house vendor, All Star Events, on notice of their responsibility as "we continue to investigate the incident."

All Star Events said in a statement: "Our thoughts and prayers go out to the families affected by this freak occurrence. We are glad to learn that there were no serious injuries and that the three children affected have already been released from the hospital. We were as surprised as anyone by the events occurring yesterday during Memorial Day festivities on Ft. Lauderdale Beach. It still seems difficult to comprehend how merely yards away blankets and tables were left undisturbed. With safety as our top priority we are cooperating with the City and law enforcement to see what, if anything, might be done to prevent such an incident in the future."

After a waterspout came ashore on the Florida beach on Monday, it hit an inflated bouncy castle, tossing it into the air and injuring three children. Video provided to ABC News by Brandon Burchett shows the swirling column of wind and ocean water head straight towards the amusement ride. The bouncy castle then got caught in the wind and flipped over repeatedly before it was swept even further up in the air.

The Fort Lauderdale Police Department said three children were injured. One was held overnight for observation and two were treated for minor fractures and released, police said.

Another suit may also be pending. Brian Greenwald, an attorney representing another injured child, claims when the child fell out of the bounce house, she hurt her wrist and suffered emotional distress, according to ABC affiliate WPLG.suffered physical and mental trauma due to the city's negligence.

According to WPLG, Greenwald's notice says the city acted with gross negligence by allowing the girl to enter the bounce house.

Greenwald did not immediately respond to ABC News' request for comment.