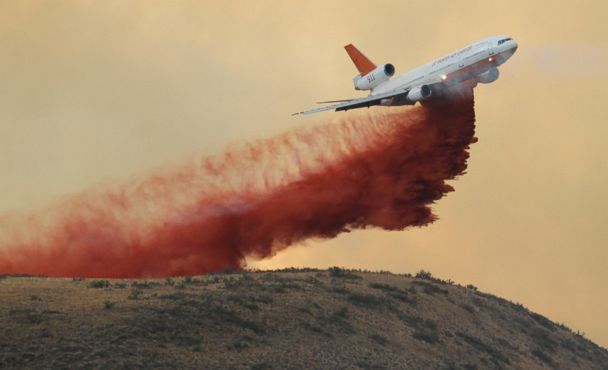 The U.S. Forest Service is putting seven more large airtankers into the skies in an effort to double down in the fight against an "above-normal" fire season, two years after an ABC News investigation found the aging firefighting fleet was struggling to protect American homes and lives.

The investigation in 2013 found the Forest Service had been plagued for a decade by a dwindling fleet of large and very large airtankers, aging aircraft often converted from military use that once were relied on by states to aid in large forest fires but were often grounded over safety issues or crashed and were never replaced.

The addition of the "next generation" aerial firefighting planes -- older passenger jets refurbished to drop 3,000 to 11,000 gallons of fire retardant, depending on the aircraft -- is badly needed in western states, notably California, which is suffering a years-long drought and nearly 60,000 wildfires.

"The Forest Service has made significant progress in modernizing the Large Airtanker fleet, which we believe is critical to protect lives, property, and valuable natural and cultural resources from wildfires that are becoming bigger, more dangerous, and more costly," Tom Harbour, Director of Fire and Aviation Management for the Forest Service, said in a statement Wednesday.

The ABC News investigation found that Forest Service officials for more than a decade had lost more than half their fleet of large firefighting planes but failed at the time to come up with a viable plan to replace them, even as the drought-stricken West battled more fires threatening homes and businesses increasingly developed in dry forested areas.

Defense and aircraft contracting giant Lockheed Martin had mounted an aggressive lobbying effort to get the agency to buy their planes, which were the only new models being proposed at a price rage of $90-120 million per C-130J. No airplane has ever been designed specifically to drop retardant and historically all firefighting aircraft were modified to do it. Lockheed was also the only company to hire a former top government official as chief lobbyist, who once oversaw the Forest Service.

The ABC News investigation found that Mark Rey, a paper industry lobbyist who served for all eight years of the Bush administration as the U.S. Department of Agriculture undersecretary directly overseeing the Forest Service, has been Lockheed Martin's chief lobbyist in selling C-130 planes -- used as a workhorse transport aircraft by the military -- to the Forest Service. Since 2009, lobbying records filed in the U.S. Senate show Rey has been paid $430,000 by the defense contractor to lobby the Forest Service for "firefighting aircraft."

E-mails obtained by ABC News through a Freedom of Information Act request in 2013 showed that Rey has enjoyed easy access to Harbour, a former subordinate. An official told ABC News Rey and Harbour met every few months to discuss aerial firefighting, in which Rey is recognized by many in the field as an expert.

Despite the close relationship, Lockheed has failed to convince the Obama administration and Congress for the past six years to buy their costly new C-130J planes, with contracts instead going to other firms modifying re-purposed older civilian aircraft that are much less expensive.

Rey told ABC News Thursday that "the company is still interested," adding that Lockheed Martin will submit future proposals to the Forest Service to buy its planes.

Harbour indicated the company may yet succeed in winning a major contract.

Rey said the problems with the aging Forest Service large airtanker fleet "have only gotten worse" over the past two years. But he said he sees hope in the Federal Aviation Administration approving a civilian version of the C-130 which will be lighter and likely less expensive than the estimated $90-120 million cost per plane to convert new C-130J's into aerial firefighting platforms.

The seven new planes added to the Forest Service's "exclusive use" contract fleet will include four BAe-146's from Neptune Aviation Services, two Avro RJ85's from Aero-Flight and a DC-10 from 10 Tanker Air Carrier, which has wowed woodland firefighters with its jumbo jets that fly as low as 100 feet over raging fires and dropping as much as 11,000 gallons of orange fire retardant. With these additions, a total of 12 large and two very large airtankers make up the Forest Service fleet, along with much smaller tankers and seasonal loaners from the military. Two additional very large airtankers are available for severe situations, officials said.

In June 2013, 19 elite woodland firefighters from Prescott, Arizona, known as the Granite Mountain Interagency Hotshot Crew, were killed fighting a blaze on Yarnell Hill, a half hour drive from their home base. Only one hotshot, lookout Brendan "Donut" McDonough, survived the disaster. A 10 Tanker DC-10 was orbiting in the skies overhead at the time awaiting orders to hit the blaze but could not have swooped in to save the hotshots, who were killed by the flames within only two minutes of the team leader's first radio call that their escape route was cut off.

"My captain was right overhead when those guys got killed," 10 Tanker owner Rick Hatton told ABC News in 2013.

Only 34 airtankers have been flying for the Forest Service this year as fires raged throughout hard-hit California, mostly made up of a hodge-podge of Korean War-era prop planes to the DC-10s jets, a surplus military HC-130H and more C-130s borrowed temporarily from the National Guard, which spray retardant rather than drop it from the belly using gravity, which is more effective, government and private fire experts agree.