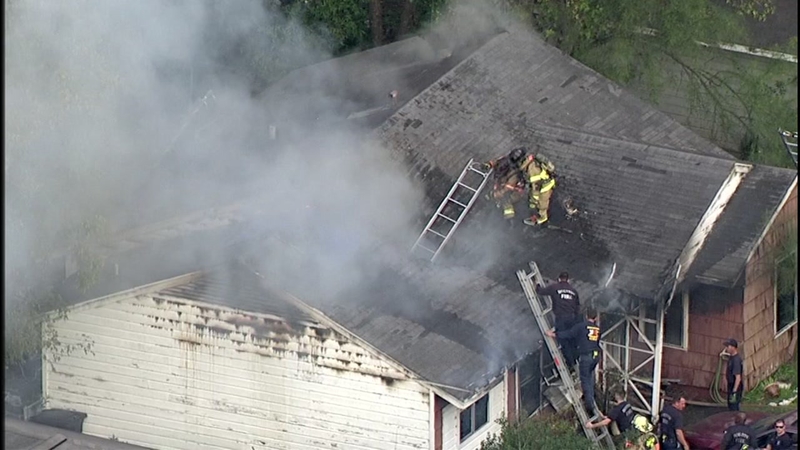 His crew was cutting a hole in the roof of a south-side home to put a fire out when he fell through.

"He fell through in such a way that the guys that were on the roof weren't able to pull him out," said HFD Deputy Chief Herman Gonzales.

The rest of his crew tried to reach into the hole to pull him out. Fearing the worst, a mayday call went out.

"Any time a firefighter calls a mayday like that, we call for extra help," Gonzales said. "But before that extra help went out to the dispatcher he was already located and extricated quick. "

Dep. Chief Gonzales says he was only trapped for about 30 seconds.

"Luckily there was a crew that was underneath, they got a ladder, positioned his legs on the ladder and then brought him down safely."

"I thought he jumped down, but they said he fell. So I just seen them pulling him out but he jumped up and was like he ok," exclaimed Ashelynn Clark.

Clark lives a few doors down from the house on Luca. She says the homeowner's son was home minutes before the fire started.

"I went to HEB and he was just sitting on the porch. I'm coming back from HEB and I seen the fire so I called 911," Clark told us. "I thought he was in the house, so I was scared. I didn't know what to do."

Firefighters searched the house more than five times and did not find him. Neighbors told us he's known for walking the street at all times of the day and night. HPD was called in to help find him, but with no luck as of late Friday night.