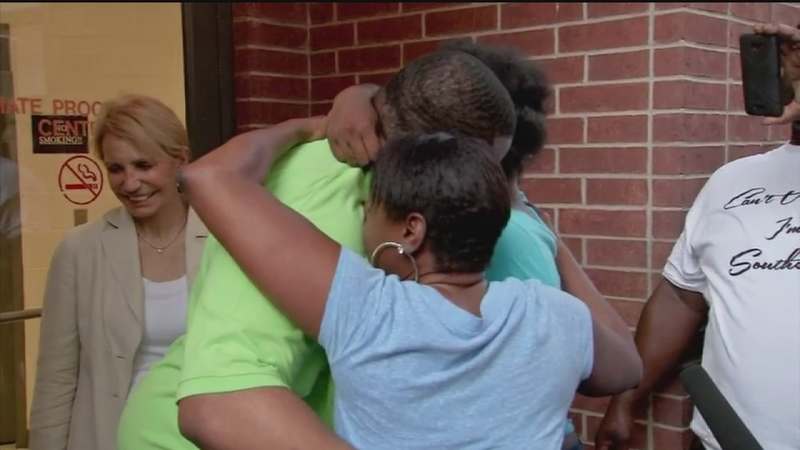 HOUSTON (KTRK) -- A convicted cop killer is off death row and out of prison.

"Everything happens for a reason but I'm good. My family alright. If they're alright, I'm alright," said Alfred Dwayne Brown when he walked out of the Harris County Monday night a free man.

Brown, who spent the past decade on death row, was potentially facing a new trial for killing veteran Houston police officer Charles Clark in 2003.

But on Monday, Harris County District Attorney Devon Anderson, accompanied by Houston Police Chief Charles McClelland, announced she does not have enough evidence to retry Brown for capital murder.

Brown was convicted in 2005 of killing Officer Clark during a robbery at a check cashing place. A store clerk, Alfredia Jones, also was killed.

Brown has always said he wasn't at the scene. In 2013, a phone record was found in a police investigator's home garage. That led to the court's granting a new trial, and now, Anderson said there is simply not enough evidence.

"He got a new trial," said Anderson. "We re-interviewed all the witnesses. We looked at all the evidence, and we came up short. I don't know how else to say it. We can't prove this case beyond a reasonable doubt."

Brown was released on Monday at around 7:30pm.

He said he holds no bitterness towards the police officers and prosecutors who worked on his case.

"They were doing what they thought was right, even though it was wrong. I cant blame them for that," said Brown.

"My heart goes out to the family of Officer Clark and Alfredia Jones, whose losses and grief cannot be comprehended," said DA Devon Anderson Monday. "I can only assure them that their loved ones will never be forgotten and our pursuit of justice for those responsible will never cease."

Another man, Elijah Joubert, also is on death row for the killings.

Brown doesn't know if he'll stay in Houston. He wants to spend time with his family, including a nearly 15-year-old daughter who was just 2 when he was convicted.