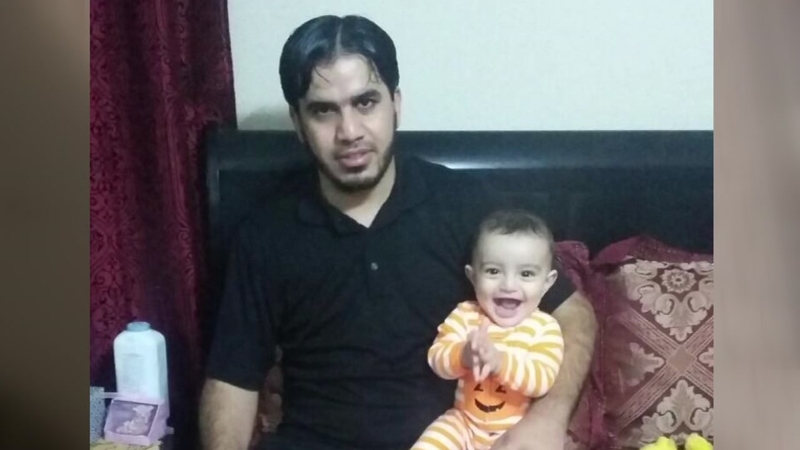 HOUSTON (KTRK) -- The family of a Houston man, arrested for his alleged involvement with ISIS says he loves America.

Omar Al Hardan, 24, is accused of providing "material support" to the Islamic State of Iraq and the Levant (ISIL).

The suspect's family paints him far differently than authorities do. They say he's done nothing wrong.

"I know my husband ...not do anything bad, not have trouble, not have anything," said Al Hardan's wife, Haneen Al Kokiss.

She says he is a limousine driver, that they've been married two years and have a 10-month-old son.

"I'm not good because my husband is in jail. My son, not good either because he cries. He needs his dad," AL Kokiss, 18, said, adding her husband left their southwest Houston apartment Thursday afternoon to answer FBI questions and never returned. Federal agents then knocked on their front door.

Al Hardan has two sisters in Jordan, according to his older brother. His parents and three brothers are all in the U-S.

According to authorities, Al Hardan was born in Iraq in 1991. In 2009, he entered the U.S. as a refugee. Two years later in 2011, he was granted legal permanent residence status.

Authorities say in 2013 and 2014, he was known to have associations with Al-Hasrah Front, a known terrorist organization. Then, in May of 2014 court records show, he began providing support and resources to ISIL.

He's accused of lying on a naturalization application later that year. In October of 2014, during a naturalization interview, he also lied - according to authorities -- saying he had never received any type of weapons training.

"There are criminals in every faith, every religion," said M.J. Khan, president of the Islamic Society of Greater Houston.

He says this case is an aberration, that most refugees are not extremists. He's asked Islamic families to be on the lookout for anything suspicious to prevent the radicalization of young Muslims.