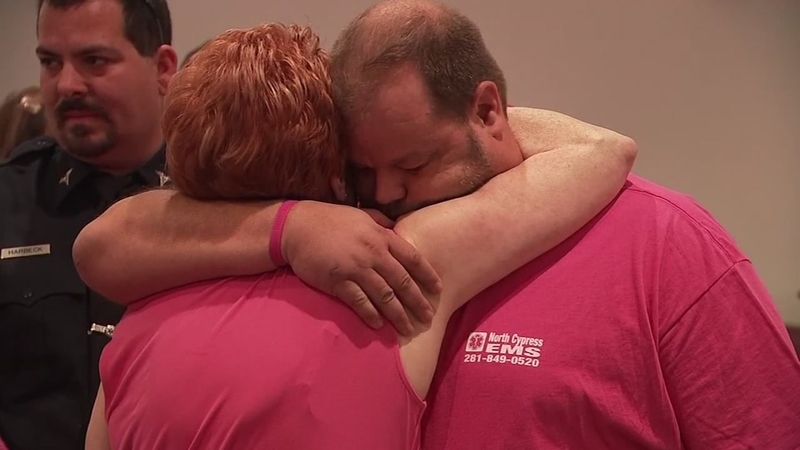 HOUSTON (KTRK) -- Exactly one week ago, 36-year-old Melissa Dawn Morden was found dead in her Humble apartment. On Saturday, the Cy-Fair paramedic was eulogized during a memorial service, filled by a standing room only crowd of mourners.

Morden's childhood friend, to whom she opened her home and heart, is charged in her murder and remains on the run.

Troy Aaron Clay, 42, has a history of criminal violence, but neither Morden nor her family knew that at the time.

"He told us he had a 4 year old son and he'd turned his life around," Morden's mother said. "I tell people now to run a background check on people in your childrens' lives."

Patricia Morden said she called last Saturday to confirm her daughter and Clay were coming to dinner. Clay, she says, kept insisting they were. When they didn't show, she says she called again. "He told me, 'she's not with us,' which scared me. And then he told me what he had done to her."

Morden called police, who went to the Humble apartment, and confirmed her mother's worst fears. "He said he was going to turn himself in," she said. Like so much else she says Clay told her, that was a lie.

At the memorial service, a grieving mother listened to testimonials of what a remarkable daughter she had.

"I got a call from a patient Melissa attended saying 'your child helped me.' She was the last patient on the last call she ever made."

Clay is charged with murder and the Morden's want to see him in jail and then on trial. "Every day that goes by with him still out there makes it worse," Patricia Morden said. "We have no clue where he is, and in his frame of mind, we have no idea what he's capable of."

On top of their grief, there is one more thing missing from the family --- Melissa Morden's beloved dog. The little Yorkshire terrier named 'Bandit,' disappeared. It wasn't in her apartment and hasn't been seen since.

"We don't know if he took Bandit, or did something to him," Morden said. "But we would like him back. That was Melissa's baby and he loved her back."

Anyone with information on Troy Aaron Clay's whereabouts, can call Crime Stoppers, or the Harris County Sheriff's Office.