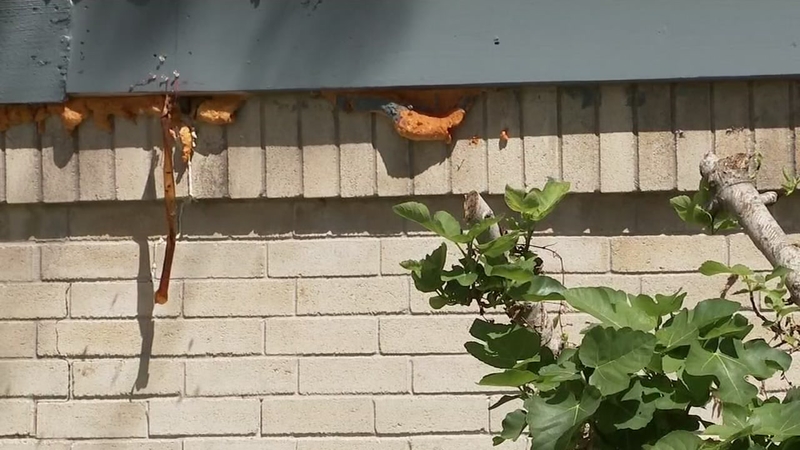 STAFFORD (KTRK) -- Spring is when bees start swarming, but a woman who lives in Stafford says the hive that's plaguing her got a head start.

Cola Thomas lives next door to a vacant house that's up for sale. She said the owner moved out four months ago. There was a bee problem before the move, and now it's growing.

The bees appear to have made their home beneath siding on the two story house that's a few feet from her patio. When Eyewitness News arrived, the bees could be seen flying in-and-out of a crack beneath a trim board.

"Even in the winter they come. When the man came to cut the grass he got bit so many times he's scared," Thomas said.

Thomas and her sister said a bee removal company attempted to move the hive but failed. Thomas tried to tackle it herself, putting up a fly trap.

"They came after me," she said nervously.

Her sister, Evelyn Crawford, emphasized it may be their problem, but it's not their property.

"For us to have to pay stuff, and they're not doing anything about it, that's not fair," Crawford said.

We contacted the realtor who's representing the homeowner. He said he will contact the owner.

For now, Thomas says she's not enjoying the sunny days in her backyard. Instead, the bees have taken over the yard.

"Something's got to give," she said. I shouldn't have to be trapped in the house."