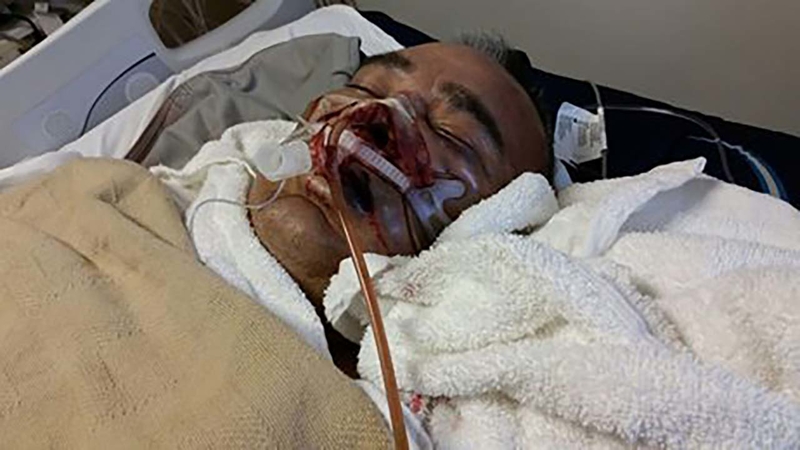 GALVESTON (KTRK) -- The family of Jeronimo Zamora Junior says he had just started a new job as a heavy equipment operator and loved going fishing. Last week, a call for medical help led to injuries the family showed in graphic pictures of their loved one in the hospital bed.

Relatives claim he was kicked, punched, tazed and struck with a baton following his wife's 911 call from their San Leon home. Carrasco said he was having some kind of anxiety attack, but seven deputies arrived before an ambulance.
Zamora later died after being treated at the hospital.

"No family should go through this at all. That was my heart, my best friend, the love of my life. My day started off picking flowers for my husband," said Carrasco.

The Galveston County Sheriff's Office report says deputies were called to a disturbance in San Leon.

They say Zamora was irate, covered in sweat, combative and fought multiple deputies. Seven deputies are listed on the call slip.

The attorney representing the family, Randall Kallinen, said, "They claim he was fighting with them but not one single sheriff's deputy was injured."

The Galveston County Sheriff says they are investigating and won't comment on specifics until that investigation is complete. Cruiser cameras were rolling but the chief deputy says their deputies do not wear body cameras.

Zamora's brother, Juan Salinas said, "He had a future and they took it from him. Tomorrow is my birthday and we had plans. Now I have to bury my brother on my birthday."

The family says they want to hear from the sheriff's office and are grieving the terrible ending to this call for help.