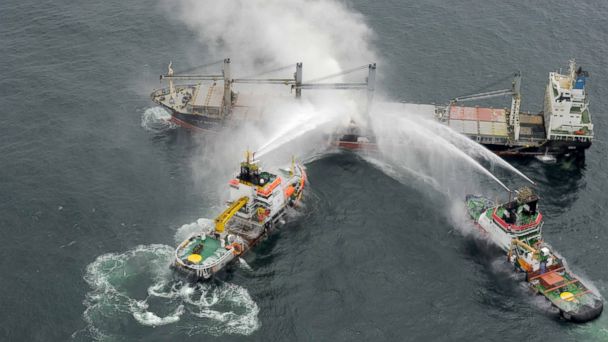 A freighter carrying fertilizer -- a potentially explosive substance -- was abandoned by its crew off the coast of Germany after the vessel caught on fire, German officials told ABC News.

But after more than two days of smoldering, and a failed attempt to extinguish the flames, the ship is no longer at risk of exploding, German officials said.

Dozens of residents from Bremerhaven and nearby towns called Germany's Central Command for Maritime Emergencies on Monday asking about a large cloud of smoke emanating from a ship sailing off the coast, authorities said.

The 630-foot long cargo named "Purple Beach" was headed for the German port of Brake and had been travelling from the United Kingdom, authorities said.

The fire was initially put out, but it picked up again on Tuesday prompting the crew to evacuate, officials said. Residents were told to keep windows and doors shut as a risk of explosion was reported.

On Wednesday, authorities managed to pour massive streams of water onto the smoking ship and firefighters were able to board the vessel, a spokesman from the Central Command said.

"All of the 26 crew members who had been sent to hospital for monitoring have now been released," the spokesman added.

Rescue boats are still monitoring the situation, making sure that the temperature of the boat remains stable. In the next few hours, officials will decide whether and how to tow the ship and clear the area.