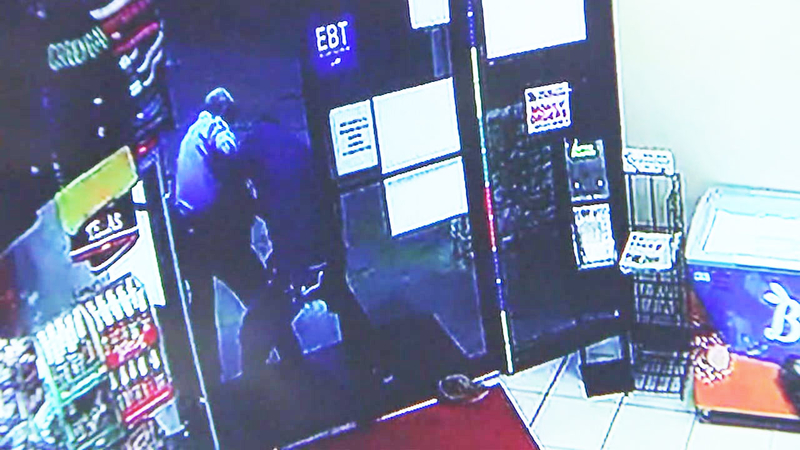 Police are hoping that suspect now shows up at a local hospital after the guard shot him in the leg.

That robbery suspect got away, but not before surveillance cameras caught the entire thing on video.

We were the first station to bring you that dramatic footage.

'HE SHOT HIM IN THE LEG,' EYEWITNESS SAYS
EMBED More News Videos

Police were called to the convenience store on Lockwood Drive and Weaver Road after reports of a shooting.

Surveillance video shows the robbery suspect walking in around 2:30am. A struggle begins as the suspect tries to grab the security guard's gun.

Convenience store owner Arshad Ali enters view, trying to help the security guard. Ali hits the suspect in the head with a stick or maybe a yardstick as they head towards the door.

At one point, security guard Jorge Palacios pushes the man outside the store. Palacios fires his pistol, hitting the suspect in the leg.
The suspect then runs off into the distance, and hasn't been seen since.

Eyewitness George Howard told Eyewitness News he saw everything from across the street.

"I mean, the dude was hitting him," Howard said. "They finally got the dude running, and when he ran, he shot him in the leg."

The surveillance footage does capture the moment of the shooting, but we are not showing that on air.

No one else was in the store at the time, and no other injuries were reported.

Ali says he hired Palacios because they've had problems with people doing drugs on the property. Now he's prevented possible death or injury after his quick actions this morning.

Police are now looking for the would-be robber, whose whereabouts again are unknown.

They have alerted nearby hospitals in hopes the wounded suspect will show up, so they can arrest him.