Pennsylvania Attorney General Kathleen Kane speaks with members of the media after her arrangement before a district judge, Thursday, Oct. 1, 2015, in Collegeville, Pa. (AP Photo/Matt Rourke)

HARRISBURG, PA -- Facing criminal charges, relieved of her law license and threatened with removal by the Legislature, Pennsylvania's attorney general seems to have decided that if she has to go, she's going to take others down with her.

Since all three branches of state government began moving against her over the past year, Kathleen Kane has released hundreds of sexually explicit or otherwise crude emails that had been sent or received by current or former public officials on their government accounts.

The tangled scandal has led to the downfall of a state environmental secretary and shamed a state police commissioner, a Pennsylvania Supreme Court justice and several former top officials in the attorney general's office. Another high-court justice resigned after newspapers disclosed his involvement.

Kane has threatened to release more, and the state Capitol is ablaze with speculation about whose emails may be next in the drip-drip-drip of disclosures.

"It's a mess. It's just a freaking mess," said John Morganelli, the Northampton County district attorney and a Democrat who at one time supported Kane. "Accusations and counter-accusations. And it gets worse every day. It's like going into a war zone."

Last week, Kane's hometown newspaper, the Times-Tribune of Scranton, ran a Halloween-theme cartoon of her as a witch saying: "I'll get you my pretties ... and your filthy emails too."

Kane finds herself increasingly isolated as she awaits trial on what she says are trumped-up misconduct charges. She has rejected calls to resign from members of both parties, including Gov. Tom Wolf, a fellow Democrat, and said it is important for the public to know about the emails.

"They raise the specter of impropriety, even if none exists, and that in itself is a problem for the judicial system," said her office spokesman Chuck Ardo.

Kane, 49, was a little-known former assistant county prosecutor when she was elected attorney general in a landslide in 2012, becoming the first woman and first Democrat to win the office. Democrats embraced her as a rising star.

On the campaign trail, she promised to investigate why it took her Republican predecessors three years to charge Jerry Sandusky, the former Penn State assistant football coach convicted of sexually abusing boys, and whether politics played a role.

Kane's criticism of the Sandusky prosecution also triggered a bitter feud with investigators who handled the case, and in 2014, authorities say, she leaked confidential grand jury information to the Philadelphia Daily News in an attempt to show that two of them had bungled a corruption investigation.

Kane was charged in August with obstruction, perjury and other offenses. No trial date has been set.

As authorities began building the leak case against her, Kane started releasing chains of emails, saying the misconduct allegations against her were concocted by a corrupt old-boy network inside law enforcement to stop her from exposing their raunchy email ring.

Her argument has gained traction with some.

Others contend she has violated people's privacy, overstepped her authority or crossed the line of decency. Critics also accuse her of selectively releasing emails to embarrass her perceived enemies and protect loyalists - allegations she says are unfounded.

On Oct. 1, as she left court in the leak case, she dropped another bombshell: The email scandal also involved U.S. attorneys, attorneys general and a Supreme Court justice who had voted along with the rest of the court just days earlier to suspend Kane's law license. That justice is now being investigated for possible judicial misconduct.

Also last month, the state Senate launched an inquiry that could result in Kane's removal.

Meanwhile, Kane has yet to release all the emails and the names of the participants, as she promised to do, and is fighting a courtroom attempt by The Philadelphia Inquirer to force her to make all the material public.

"I don't believe the citizens of the commonwealth need to see more pornography, but I think they need to see who the players are," said Terry Mutchler, former director of Pennsylvania's Office of Open Records and a lawyer who is representing the Inquirer. 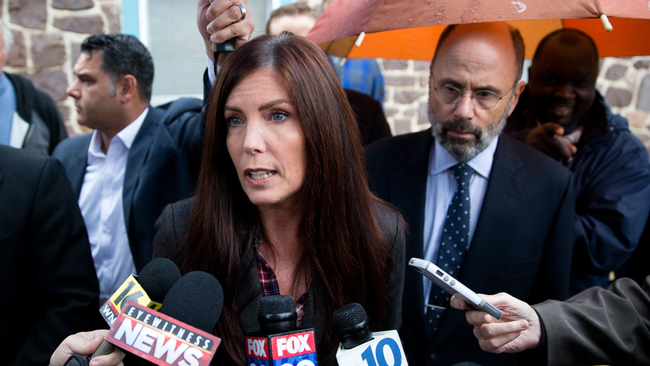