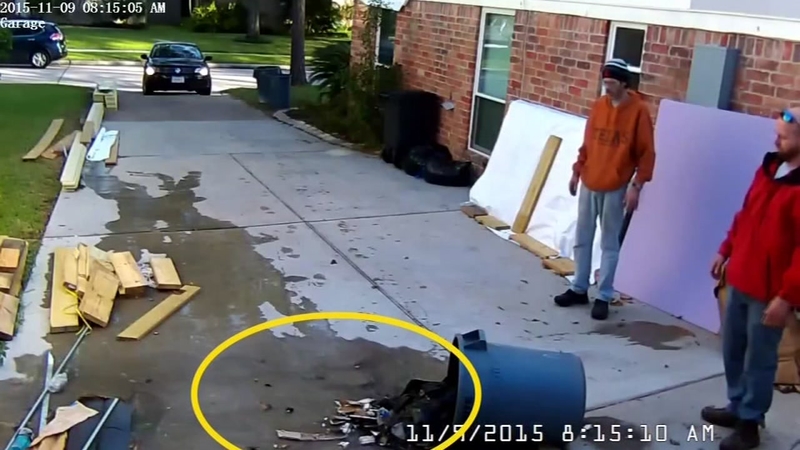 HOUSTON (KTRK) -- A dispute between a west Houston homeowner and a contractor turned ugly Monday morning. The homeowner's surveillance camera captured the contractor's son dumping trash and other construction materials in his driveway.

Eric Anderson says he hired Douglas Ott to finish a remodeling project started by a previous contractor, who was fired for embezzling the money he was paid. Anderson and his wife took to their neighborhood blog, where they found Mr. Ott.

"He seemed like a good guy. Initially we agreed that $18,000 would be enough to finish the project. But then the cost kept going up,"
Anderson told Eyewitness News.

Industry experts say that a project's time and cost often increase once construction begins. Anderson and Ott eventually agreed that
$25,000 would be enough to complete the work.

But Anderson tells a different story. He says that that he agreed to pay Mr. Ott once the work was completed.

"He approached me on a Friday expecting to be paid but the job wasn't done. The $5,000 would have gone to Doug had he finished the work,"
Anderson explained.

Mr. Ott confirmed to Eyewitness News that he wanted Anderson to pay him more for the project, saying that the unfinished work from the previous contractor presented unforeseen challenges.

When asked if he'd been fired by Anderson or walked away from the project voluntarily, Mr. Ott replied, "That's hard to say. I walked off after he said he didn't want me there anymore. I can't do $35,000 worth of work when there's problems with the blueprints and everything else."

As for the piles of trash left in Anderson's driveway, Mr. Ott said it wasn't his responsibility to discard it.

"I needed my trashcans back. I wasn't about to take on more costs to dump garbage if he wasn't going to pay me," Ott explained of the trash he left behind. "I've been in this business for 40 years and never had to deal with something like this. I stand by my work."

"The garbage that was dumped was from the roof project in which we paid him in full to replace," Anderson said.

Mr. Ott later told Eyewitness News that he'd be willing to clean up the mess. Mr. Anderson says he would like an apology.

"I've hired a new contractor. The lesson I learned here is that, in the future, I'm going to do better research and have a contract in place that spells out in writing the cost and expectations for he project," Anderson said.
Related topics:
houstontrashdumping
Copyright © 2021 KTRK-TV. All Rights Reserved.
More Videos
From CNN Newsource affiliates
TOP STORIES