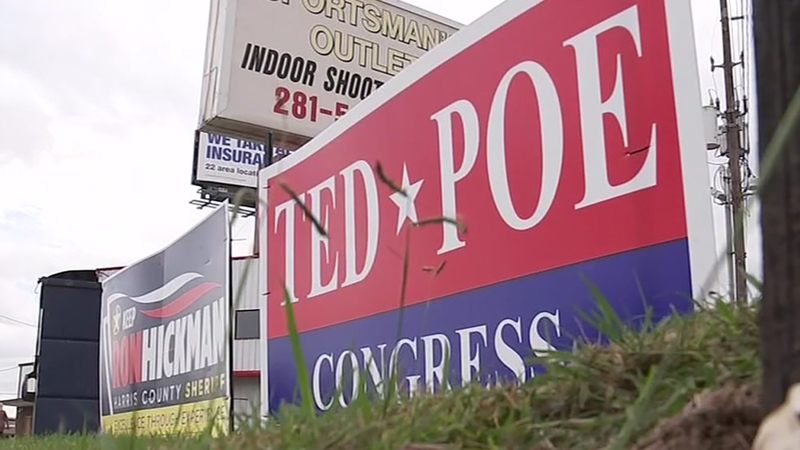 HUMBLE, TX (KTRK) -- In election season, you hear about political signs being taken down by opposing camps. Usually, that's done during the nighttime hours.

In Humble, a husband and wife removed signs for Congressman Ted Poe and Sheriff Ron Hickman in broad daylight. The signs were posted in front of a shooting range on FM 1960 on October 23.

According to Humble police, Steven Vanris and his wife, Susan Pilko, told an employee who ran out to tell them to stop, that they were part of the county's "Bandit Ranger" volunteer program -- which targets signs posted to phone poles and rights of way.

The political signs were on private property. According to police, Pilko told the employee that, "she was given authority to remove the signs by Devon Anderson."

The DA's Office has no connection to the program.

The attorney's Office said that the couple went through training for the "Ranger Bandit" program, and the distinction between public and private property is made clear, as well as informing volunteers that campaign signs are not to be touched.

The couple stuffed the signs in their Prius and drove away, with the employee running after them. The entire incident was recorded on surveillance video.

Police were contacted, tracked down the car from its license plate, which led them to the couple's Kingwood home. There, according to police, 18 signs were found in their garage, all of them promoting Republican signs. Among the candidates were Ted Poe, Ron Hickman, Mark Herman and Mike Sullivan.

Signs were said to be taken from four locations in the Humble area.

The couple has been charged with aggregate theft with their bond set at $500 each.

Pilko and her husband are both Democrats. A Clinton sticker was on the bumper of a car in their driveway.

"We didn't go because I don't believe in parties and discussing politics," he said, adding that he was 'surprised' the couple would be accused of theft.

"This is not politics. This is a crime. I trust the law in Houston to bring justice to those responsible. Thieves ought to be punished whether they're stealing political signs or cars."
Related topics:
humbletheftpolitics
Copyright © 2021 KTRK-TV. All Rights Reserved.
TOP STORIES
Body matching description of Gabby Petito found in Grand Teton: FBI
10-year-old injured in shooting in N. Harris Co., deputies say
Man accused of shooting girlfriend to death charged with murder
Pasadena mom survives birth scare after fire displaces her family
Attorney explains why US flying Haitians to home country is a problem
2 injured after ejecting from Navy jet near Fort Worth before crash
Doctor says he violated Texas' restrictive antiabortion law
Show More
Mayfield shakes off injury to lead Browns past Texans 31-21
US closes part of Texas border, begins flying Haitians home
2 shot outside N. Houston nightclub as police arrive for fight call
2 killed, 1 hurt in NW Houston crash involving tow truck
Passenger killed in crash with DUI suspect in SW Houston
More TOP STORIES News