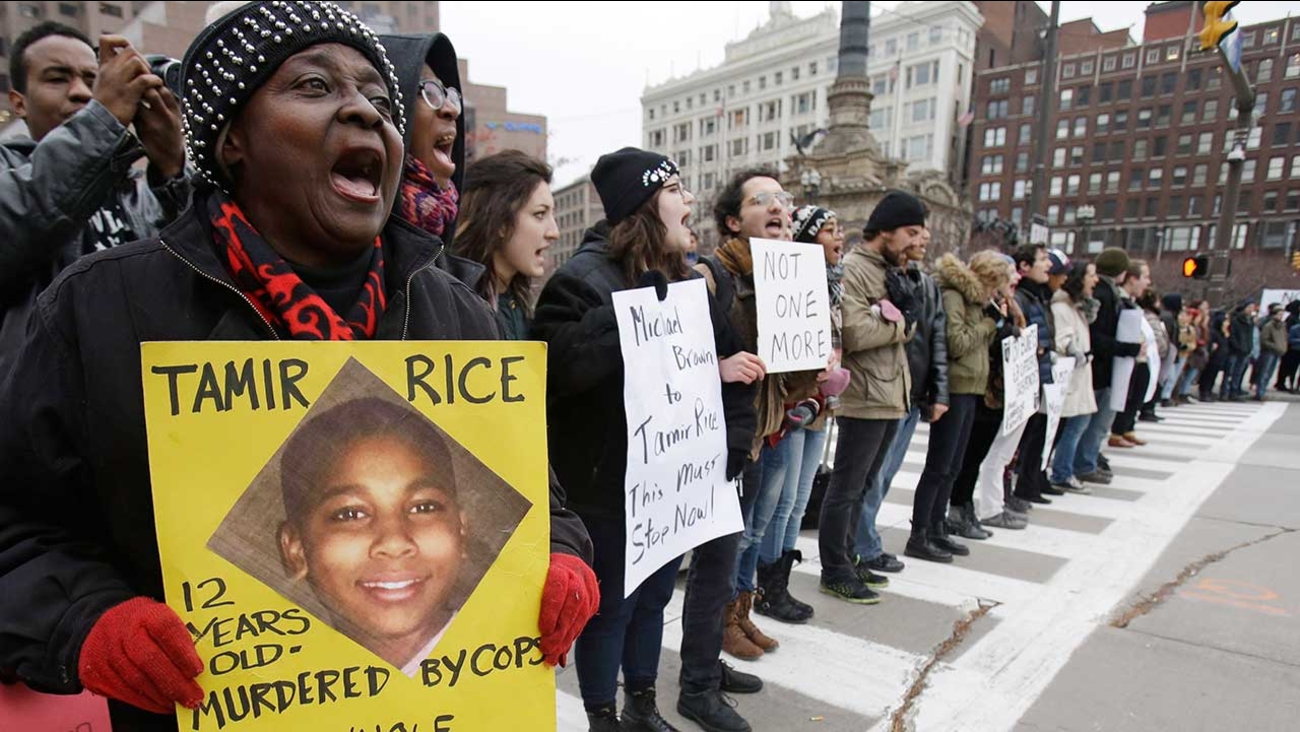 This Nov. 25, 2014, file photo, shows demonstrators blocking Public Square in Cleveland, during a protest over the police shooting of 12-year-old Tamir Rice

CLEVELAND, OH -- The city has reached a $6 million settlement in a lawsuit over the death of Tamir Rice, a 12-year-old black boy shot by a white police officer while playing with a pellet gun outside a recreation center.

An order filed in U.S. District Court in Cleveland on Monday says the city will pay out $3 million this year and $3 million the next.

The wrongful death suit filed by his family and estate against the city and officers and dispatchers who were involved alleged police acted recklessly when they confronted the boy on Nov. 22, 2014.

Video of the encounter shows a cruiser skidding to a stop and rookie patrolman Timothy Loehmann firing within two seconds of opening the car door. Tamir wasn't given first aid until about four minutes later, when an FBI agent trained as a paramedic arrived. The boy died the next day.

A grand jury declined to bring charges against the officers, and a federal civil rights investigation is pending. The shooting raised questions about how police treat blacks, spurred protests around Cleveland and helped spark the creation of a state police standards board to lay out rules about use of deadly force in law enforcement.

Tamir's mother, Samaria Rice, had alleged that police failed to immediately provide first aid for her son and caused intentional infliction of emotional distress in how they treated her and her daughter after the shooting.

The officers had asked a judge to dismiss the lawsuit. Loehmann's attorney has said he bears a heavy burden and must live with what happened.

Tamir lived across the street from the recreation center where he played nearly every day.

The officers had responded to a 911 call in which a man drinking a beer and waiting for a bus outside Cudell Recreation Center reported that a man was waving a gun and pointing it at people. The man told the call taker that the person holding the gun was likely a juvenile and the weapon probably wasn't real, but the call taker never passed that information to the dispatcher who gave Loehmann and Garmback the high-priority call.

Tamir was carrying a plastic airsoft gun that shoots nonlethal plastic pellets. He'd borrowed it that morning from a friend who warned him to be careful because the gun looked real. It was missing its telltale orange tip.

The settlement comes two years after the city settled another lawsuit connected to the killings of two unarmed black people in a 137-shot barrage of police gunfire at the end of a 2012 car chase. Cleveland settled a lawsuit brought by the victims' families for a total of $3 million.
Related topics:
lawsuit
Copyright © 2021 by The Associated Press. All Rights Reserved.
More Videos
From CNN Newsource affiliates
TOP STORIES