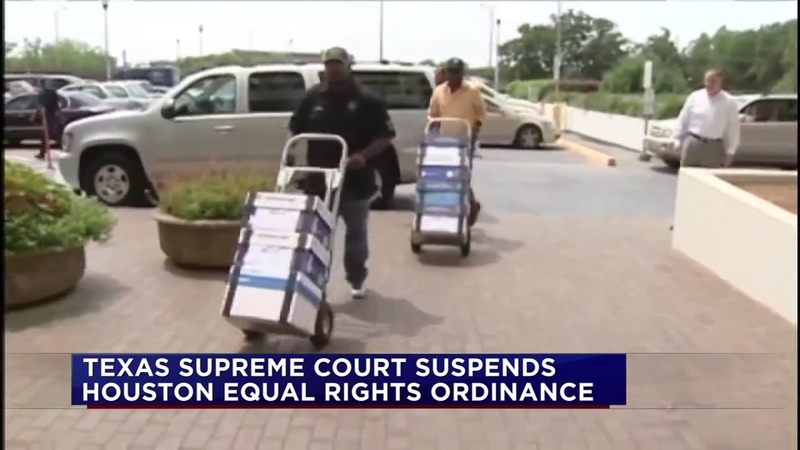 HOUSTON (KTRK) -- The Texas Supreme Court has ruled that enforcement of the City of Houston's equal rights amendment (HERO) be suspended.

In an opinion issued today, the court ruled that the city must repeal the ordinance by August 24 or place the issue on the November ballot.

In July 2014, a coalition of citizens organized a petition drive calling for the city to repeal the ordinance. The City Secretary certified that there were enough valid signatures, however the City Attorney later said that there were not enough signatures.

Houston must repeal a newly adopted equal rights ordinance or let voters decide if they want to ban discrimination based on sexual orientation and gender identity, the Texas Supreme Court ordered Friday.

The ruling was not about the merits of the ordinance, which is similar to what other big Texas cities have adopted, and aim to protect gay and transgender people against discrimination in employment and public places.

The all-Republican court instead decided that conservative activists should have succeeded in a petition drive to put the issue on a ballot.

"The legislative power reserved to the people of Houston is not being honored," the court wrote.

The court ordered the city to repeal the ordinance by Aug. 24 or let voters decide the issue in November. Houston Mayor Annise Parker, who is gay and pushed for the ordinance passed by the City Council last year, said in a statement she was disappointed:

"Obviously, I am disappointed and believe the court is in error with this eleventh hour ruling in a case that had already been decided by a judge and jury of citizens. Nonetheless, we will proceed with the steps necessary for City Council to consider the issue. At the same time, we are consulting with our outside counsel on any possible available legal actions.

Houston's Equal Rights Ordinance is similar to measures passed by every other major city in the country and by most local corporations. No matter the color of your skin, your age, gender, physical limitations, or sexual orientation, every Houstonian deserves the right to be treated equally. To do otherwise, hurts Houston's well-known image as a city that is tolerant, accepting, inclusive and embracing of its diversity. Our citizens fully support and understand this and I have never been afraid to take it to the voters. We will win!"

Last year, opponents who have fought the ordinance from the start say they obtained the roughly 18,000 signatures required to force a voter referendum.

But council members said too many signatures were invalid, even though the city secretary certified the petition. A lawsuit was filed by the former chairman of the Harris County Republican Party, and justices on Texas' highest civil court ruled that the petition should have held up.

Republican Gov. Greg Abbott, a former justice on the court, praised the ruling as a reassurance of personal values.

"Freedom of expression can only exist once government removes itself from stifling free speech, repressing religious liberty and interfering with the lives of its citizens," Abbott said.