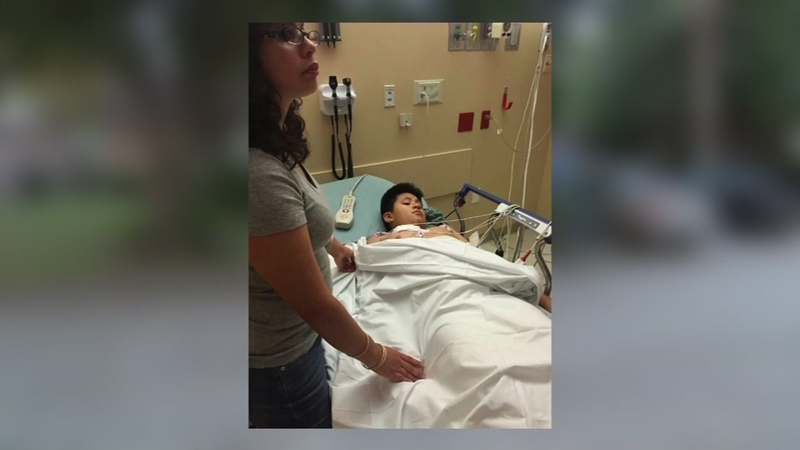 HOUSTON -- A child has been shot during a carjacking in northwest Harris County, the Harris County Sheriff's Office said.

Police say it happened around 9:30pm last night in the 3400 block of Cheaney Lane. A woman and four children told police they had just pulled into their driveway after going out to dinner when two men armed with guns walked up to the car and demanded their vehicle.

A fight broke out between the woman and the two gunmen. At least one of the gunmen then opened fire. One of the bullets struck an 11-year-old boy in the chest who was sitting in the front seat. All of the children then got out of the car, and the suspects took off in the woman's Chrysler 300.

The child who was shot was then rushed to Memorial Hermann Hospital where he was treated and released.

Family members just shared this photo of 11yo Christian Gomez who was shot during a carjacking last night. pic.twitter.com/g5VkDEEu8C

Police say the gunmen then went and picked up two other men in the stolen Chrysler 300. All four then drove to a game room on Veterans Memorial at Fallbrook.

Police say the car pulled up parallel to the building of the game room. Two of the four gunmen crouched down on the driver's side of the vehicle and had their guns drawn.

A security guard at the game room saw what was happening, confronted the gunmen and started firing at them. The gunmen were not hit, and they did not shoot at the guard.

All four suspects in the Chrysler 300 then got out the vehicle and jumped into a getaway vehicle with two other men inside. All six of those men then escaped and are still on the loose.