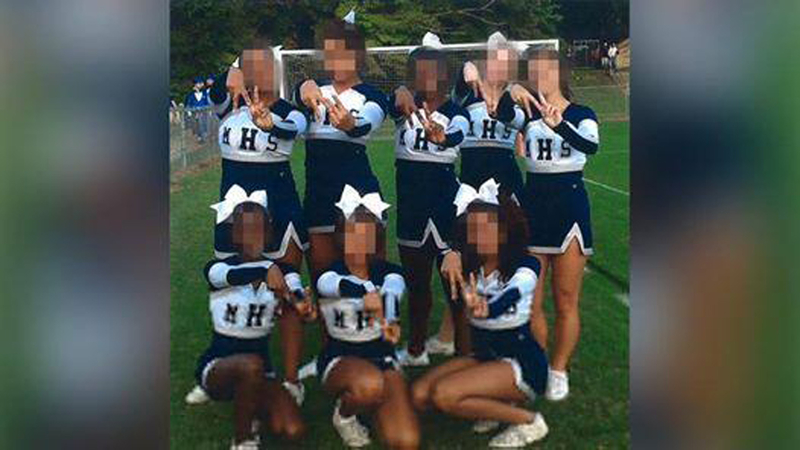 RALEIGH, NC -- A North Carolina school district says cheerleaders have been disciplined following an outcry from concerned parents over an incident at a recent Friday night football game.

Some parents claim they overheard the cheerleaders loudly chanting the N-word, while taking a picture. They claim the girls were holding up "hand signs" that represent the racial slur as well.

Screenshots from Instagram were sent to ABC11, KTRK-TV's sister station in Raleigh, anonymously by concerned parents at Millbrook High School. The pictures detail what they say they saw and heard at the football game last month at the school.

During a break from leading cheers, the cheerleaders were snapping pictures, in which they can be seen using their fingers to form the letter N.

The parents said the girls could be overheard chanting the phrase, "N***a nation." A phrase one commenter on Instagram repeated back with familiarity and pride.

Millbrook High senior Ahmed Aboughady had not seen the pictures nor recognized the phrase, but expressed concern over the image it portrayed of the school.

"That's very disheartening to me. It makes me not proud to say I go to Millbrook," he said.

Rey Tapia, who is a Millbrook senior, says he had seen the pictures online, but didn't understand the significance of the hand gestures.

"I just saw the pictures and kinda like didn't read any comments and didn't really pay it too much mind. But I would see why parents would get concerned," Tapia said.

In the letter to ABC11, the parents said they were "all shocked." They likened the hand gestures to gang signs, writing "these are varsity cheerleaders representing their school. What are children learning from these young ladies?"

"It's actually kind of creative that they were able to present the N," said Neal.

Neal suggests the dustup is the latest example of a younger generation shifting a word's definition --not fully grasping the historical pain of the N-word.

That generational divide played out between one Millbrook mom and daughter as we got their reaction to the controversy.

"It's unacceptable," said Millbrook High parent Nora Flynn. "It's not the diversity we teach in our household. It's not the language we use. I would be very upset if that showed up on [my daughter's] Twitter feed or whatever it is."

Flynn's daughter, Ally, who is a Millbrook sophomore, had a slightly different take.

"I think it's kind of become like a cool thing to do -- or just something to say and do for a picture -- instead of actually having a meaning behind it," Ally said.

"These are young folks, who in some ways are attempting to use the word to build community. They're trying to mark themselves generationally in a certain kind of way," said Neal. "I think it becomes an issue when you ask yourself whether or not the use is appropriate at a given time."

Administrators at Millbrook High School did not find the use of the word and hand gestures by uniformed cheerleaders appropriate. The school says the incident has been addressed with the girls but will not say what disciplinary action was taken.

One of the cheerleaders' mom told ABC11 she was with the girls during the whole game, and while the girls did use the gesture, they didn't chant the phrase or even say it out loud.

The mother agrees it's a generational disconnect, but says the girls have learned a tough lesson from this.