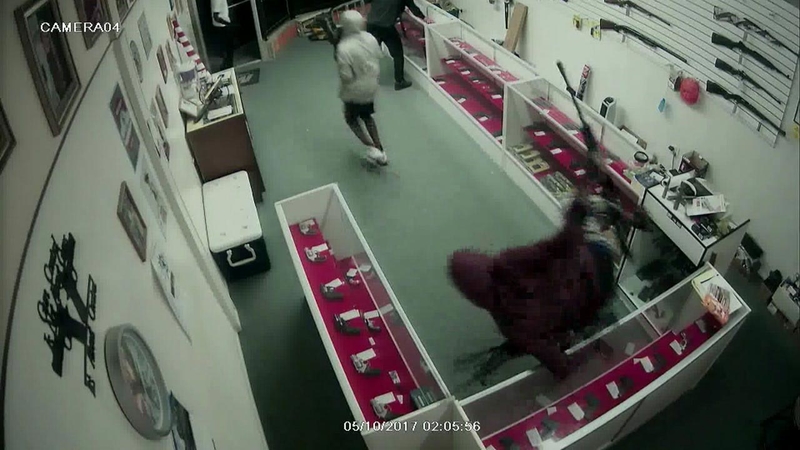 ALVIN, Texas (KTRK) -- It took less than a minute for a gang of smash and grab robbers to break into an Alvin gun store and get away with more than a dozen weapons. This is not the first time someone used a stolen truck to smash into the store on Coombs Street.

In January 2016 someone did virtually the same thing, using a stolen truck to ram through the bars and plate glass. This time around they pulled the door off the frame using a truck stolen from around the corner.

The owner of R and G Guns is once again picking up the pieces after a smash and grab robbery. This time a chain was hooked to the door and a stolen truck used to rip it off the door frame. The robbers used Howard Smith's truck in the smash and grab.

Smith said, "Law came up, police did, about 2 o'clock in the morning beating on my door asking if I had a truck like this."

Smith was then told then his truck was the tool used to allow four thieves into R and G Guns. The door lock was jimmied to get in the truck, and the bumper was dented during the robbery.

"The chain was hanging from my back bumper," Smith said. "I guess they jumped out of the truck after they ripped the door off, and they left the truck ... rolling in gear. It was still running when I got over there to pick my truck up."

Alvin police got an alarm call when the door was damaged. Within a minute, officers were on scene but the suspects and the weapons were already gone.

"It took less than a minute for a gang of smash and grab robbers to bust into an Alvin gun store and get away with more than a dozen weapons," Alvin PD Lt. Shawn Gilcrease said. "It appeared to be well-orchestrated. They had a plan to steal the vehicle and come up, make entry in that, run in and grab the weapons, so it appeared they planned this out."

Police say the men left in a second vehicle. Apparently they filled bags with AR-15's and pistols, more than a dozen weapons in all.

In January of last year the entire front of the store was demolished when a stolen truck was used by smash and grab robbers to steal AR-15s. The weapons were found that same night, and a suspect arrested a day later.

So far the weapons and suspects from this robbery are still on the street.

Alvin police reviewing surveillance images from the robbery showing four men enter and take the weapons in less than 60 seconds.