KTRK
HOUSTON (KTRK) -- A smash and grab crew of thieves emptied display cases and a wall of rifles Tuesday morning at Carter's Country. Now the ATF says some of the suspects have been identified and arrested.

Houston police say as many as 10 suspects raided the store and got away with at least 50 weapons. The amount of weapons is not counting those they dropped in their haste to get out before police arrived.

Jeff McShan, a spokesman with the Harris County District Attorney's Office and Crime Stoppers, says three of the suspects have been arrested. ATF sources confirm they have good leads and they're following up on them.

A spokesperson with the ATF tells Eyewitness News some of the stolen weapons also have been recovered but did not provide an exact number.

A large pickup truck rammed a plate glass window. A chain was used to pull out burglar bars.

Upon entering the building, they ransacked the store causing extensive damage to the property. The suspects used a hammer to break the glass cases that stored the handgun and took several rifles off the rack. The suspects left this location with the firearms and exchanged vehicles approximately one block away. The suspect fled the second location in an unknown direction of travel, in a possible late model Chevrolet Traverse SUV.

Video from the burglary of a Carters Country on March 1

Video from the burglary of a Carters Country on March 1

"It takes a lot of nerve to do that," said Jerry Wilson.

Wilson works at the Suit Mart next door and was glad to hear about the arrests.

Wilson and other business owners nearby are hoping more arrests will come soon.

But for now, there's three down and seven to go.

Crime Stoppers will pay up to $5,000 for information leading to the charging and/or arrest of the suspect in this case. Information may be reported by calling 713-222-TIPS (8477) or submitted online at www.crime-stoppers.org. Tips may also be sent via a text message by texting the following: TIP610 plus the information to CRIMES (274637) or via the mobile app (Crime Stoppers Houston). All tipsters remain anonymous.
Related topics:
houstonburglarysurveillancecaught on cameragunssurveillance video
Copyright © 2021 KTRK-TV. All Rights Reserved.
RELATED 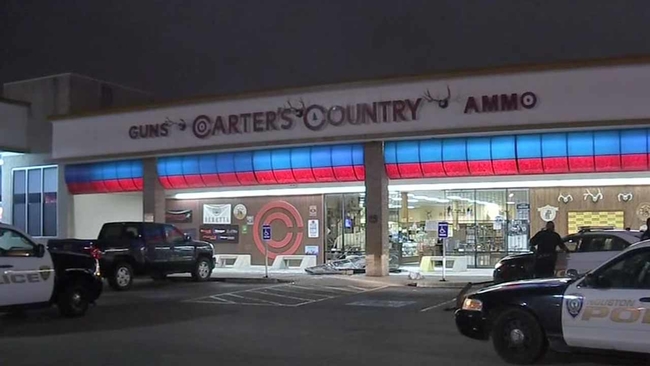