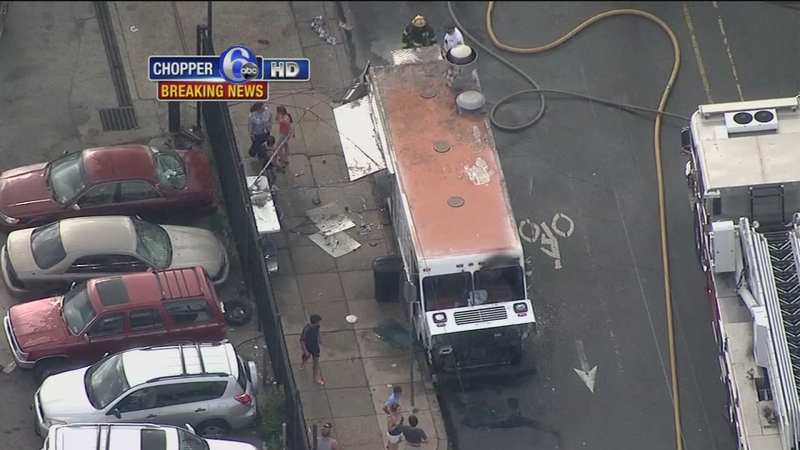 FELTONVILLE, PA -- A propane tank on a food truck exploded in Philadelphia Tuesday, sending a huge fireball into the sky and injuring at least 11 people, including two who suffered serious burns, police said.

The explosion outside an auto body shop in the city's Feltonville neighborhood caused serious burns to a 27-year-old woman and teenage girl, said Philadelphia Police Chief Inspector Scott Small. He said that four others were listed in stable condition at area hospitals and at least five others were treated and released.

Small said that the two critically injured victims suffered serious burns across a substantial portion of their bodies.

Surveillance video from two businesses near the La Parrillada Chapina food truck captured the explosion, followed by a huge fireball that engulfed the truck and crossed to the other side of the street, Small said.

A utility pole on the other side of the street caught fire, but the fireball did not reach the homes across the street or businesses next to the truck.

Two cars driving by the explosion were briefly engulfed by flames, Small said, and five people inside were treated and released from area hospitals.

Small said that the four-foot propane tank that exploded, one of two that fuels the food truck, was found about 150 feet away in a residential backyard.

The city's fire department, along with police detectives and the bomb squad were investigating.

Jane Kim, the owner of a store next to the auto body shop, said that the food truck is parked outside daily. She said that she heard the explosion and was shaken by the incident.

"We thought something fell over. Then all of a sudden we heard screams," neighbor Nicole Ellis told WCAU-TV. "We walked outside and the truck was billowing fire."

Neighbor Luis Rivera told The Philadelphia Inquirer that his home across the street shook from the blast.

"I thought it was a car accident - there are usually a lot on this street," he said. "Then I came outside and saw the lunch truck in flames."

Three police officers from the Southeastern Pennsylvania Transportation Authority stationed down the street were the first to respond to the fire and help some of the victims. Spokeswoman Heather Redfern said the officers helped two women who were badly burned, including one standing at the back of the truck and one sitting at a table nearby.
Related topics:
explosionu.s. & world
Copyright © 2021 by The Associated Press. All Rights Reserved.
TOP STORIES
Amazon van thieves stopped by grandfather who lost granddaughter
Mother of 5 believed to be murdered by her ex-boyfriend, officials say
House of Pies manager accused of stealing customer's card information
43-year-old's body found in a ditch with head gunshot wound, HPD said
Driver who hit deaf woman ran off covered in blood, HPD says
That fall feeling is fleeting
Gunman charged after allegedly killing 2 men in N. Harris Co.
Show More
Man charged after his dog allegedly attacked woman and her dog
All migrants are gone from Del Rio border camp, officials say
'The View' COVID chaos possibly sparked by false-positive test results
State's audit will review 4 Texas counties' 2020 election results
3 CDC studies fuel universal masking guidance for schools
More TOP STORIES News