Tree trimmer whose leg was amputated in Porter accident speaks out

KTRK
By Jessica Willey
PORTER, TX (KTRK) -- A man who lost his leg in a tree trimming accident is alive, thanks in part to a product that's been added to many ambulances in Montgomery County.

Ray Leyva, speaking publicly for the first time, tells Eyewitness News he hopes to say thank you one day to the first responders who helped him. The 42-year-old was cutting limbs on a tree in Porter last month when a rope broke and a limb crushed his leg. He hung upside down for almost two hours, three stories off the ground begging firefighters to just free him.

"I told them just get my machete, if not there's my chainsaw. Turn it on, cut my leg off and get me off this tree," Leyva said.

Eventually they did amputate his leg.

Paramedics used QuikClot, a blood clotting product the Montgomery County Hospital District just added to its ambulances, to stop the bleeding. Leyva was one of the first patients to benefit.

"We feel confident at least in several patients they would have died if we didn't have this technology," explains Dr. Mark Escott, the medical director for the Montgomery County Hospital District.

Leyva doesn't remember that. He lost consciousness. Now he's focused on recovering, using humor every step of the way.

"He was telling me, I'm kicking you, can you feel it," his sister Maria Badiee laughed about.

Leyva has already gone back to work. With his son's help, he replaced water heaters last weekend in an attic. People have told him he's an inspiration and he's embraced it.

"Just be happy and go and keep going like I am. I'm going to keep on, I ain't going to quit," Leyva added.
Related topics:
porter
Copyright © 2020 KTRK-TV. All Rights Reserved.
RELATED 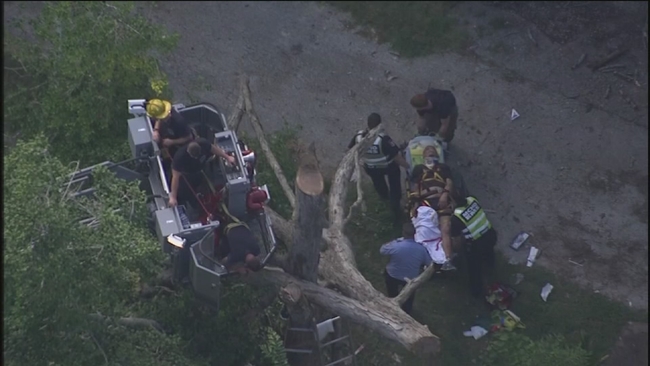