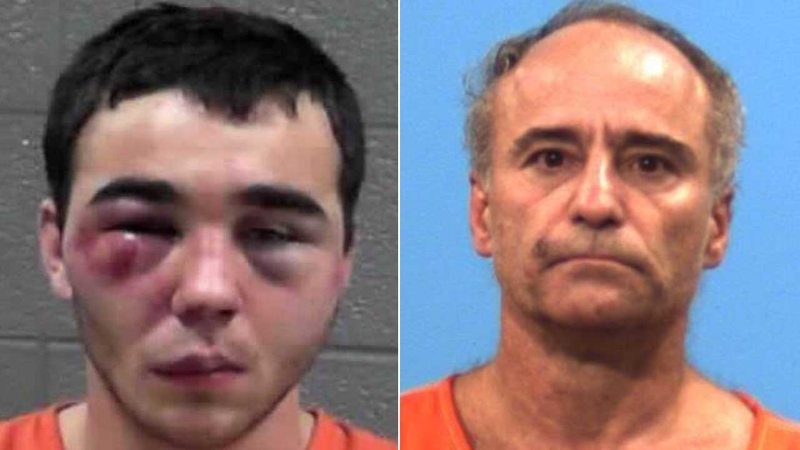 Father and son from Alvin accused in murders

LEWISBURG, WV (KTRK) -- A father and son from Alvin are in police custody after an alleged multi-state crime spree, which left an elderly couple dead and two police officers shot.

Police in North Carolina say 54-year-old Edward Campbell and 21-year-old Eric Alexander Campbell broke into the home of a retired 73-year-old volunteer firefighter and 62-year-old nurse yesterday and, after setting the house on fire, kidnapped the couple and stole their truck.

Investigators began piecing together the crime at around 4pm when two Lewisburg, West Virginia, officers pulled over an SUV on a highway outside the city, Lt. Michael Baylous of the West Virginia State Police said in a news release. The SUV had a North Carolina license plate that showed it had been stolen, according to police.

During the traffic stop, a second vehicle - a truck - pulled over nearby.

As the officers conducted the stop, the driver of the truck shot at them with a handgun, wounding both officers, Baylous said. One officer returned fire, wounding the suspect in the leg.

Baylous said the driver of the SUV fled the scene and hid but later turned himself in without incident. The driver of the truck also fled and was eventually taken into custody by the Greenbrier County Sheriff's Department, he said.

Investigators then discovered two bodies under a mattress in the bed of the truck.

State Police did not immediately identify the victims, but Granville County Sheriff Brindell B. Wilkins Jr. said the bodies were those of Jerome Faulkner, 73, and his wife, Dora Faulkner, 62.

The sheriff told the station that the two suspects burst into the Faulkners' home near Oak Hill on Thursday morning, set the house on fire and took the couple and their SUV.

Wilkins said it was not immediately clear why the two were targeted or whether they were killed in the initial attack or sometime later.

The Associated Press could not immediately reach Wilkins Friday.

The two Lewisburg officers and the shooting suspect were being treated for injuries that were not life-threatening, Donna Hinkle, administrator of the Greenbrier County 911 center, said Thursday.

The two suspects will be charged with malicious assault and attempted murder of a police officer in Greenbrier County, according to the news release.

In North Carolina, Jerome Faulkner was a founding member of the Cornwall Volunteer Fire Department near Oxford in the 1980s and had served as its chief. He'd retired from firefighting a few years ago but was remembered for his willingness to help younger members of the department.

"He helped train me when I joined. He was a mentor," said Steven Frazier, the department's current chief, who joined in 2000.

"He would still come by and help out when he could, but he was enjoying his retirement," he said.

Faulkner was active in the church - someone who was kind - "just a good person. Everybody knew him," he said.

With about 8,400 people, Oxford is a typical small town in North Carolina, with tree-line streets and roads leading to the country. The Faulkners lived on one of those roads - Highway 96. Their house was set back a little from the highway.

Near the Faulkners' torched home, neighbor and relative Judy Laws said she got the news late Thursday last night from another family member that the victims were Jerome Faulkner and his wife, Dora.

The Laws had heard sirens blaring and saw trucks speeding down the road. They learned the fire was at Faulkners' house. The Laws live about 500 feet from the Faulkners, but a thicket of trees block their view.

"They sort of kept to themselves. But when anyone needed help, they were there," she said. "You couldn't find any better people than they were."

She said that while Dora was still working as a nurse, Faulkner had retired. "He was in bad health," she said.

Laws said her own husband has had numerous health problems over the years - but the Faulkners were always willing to help them. "They'd ask if we needed anything. All I needed to do was call and Dora would be here in a minute."

She said word spread quickly in the tight-knit rural community.

"We don't know if they were killed in the house or killed later. We just don't know. But it makes you wonder. It seems so random," she said. "They could have picked any house. It could have been anyone on this road."

In Alvin, neighbors tell Eyewitness News that Edward Campbell was "weird" and "angry," but they say he wasn't always that way. Campbell moved into the Alvin area in 2002 and was friendly to them, even helping one neighbor put down concrete for her porch. He worked as a nurse and had a good job for a while.

But Brazoria County Sheriff's investigators say that in 2006 he was arrested for possession of a controlled substance, and then in September 2014, he was arrested again for aggravated assault toward his wife. He was let out on bond.

Neighbors said Edward Campbell kept to himself in recent years. "He seemed like a really good guy, but it just seemed like he started deteriorating," a neighbor said.

Edward Campbell had two businesses, ER Transport Services and Amerifreight Logistics, a transport company. Both businesses were run out of his house.