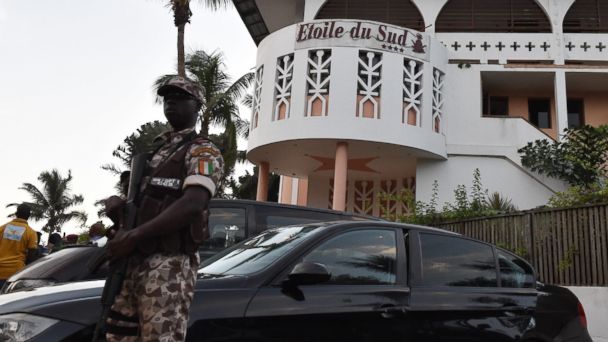 Al Qaeda in the Islamic Maghreb claimed responsibility for an attack on three hotels Sunday in Grand-Bassam, a beach town in Ivory Coast that's popular with locals and foreigners.

Resident Josiane Sekongo said people starting running from the beach in Grand-Bassam when the shots rang out.

Ivory Coast's president said there were 16 dead victims: 14 civilians and two soldiers. Their identities were not immediately clear.

Searches were ongoing in the area for victims and possible accomplices, the interior minister said.

The U.S. Embassy in Abidjan said it was monitoring the situation, adding there was no evidence that U.S. citizens were targeted or harmed.

Abidjan is about 25 miles from Grand-Bassam.

Two other attacks were carried out in recent months at West African spots frequented by foreigners.

In November, gunmen killed at least 21 people, including a U.S. public health worker, at the Radisson Blu Hotel in Mali.

In January, gunmen attacked a hotel and cafe in Ouagadougou, the capital of Burkina Faso, killing at least 28 people, including a U.S. missionary.