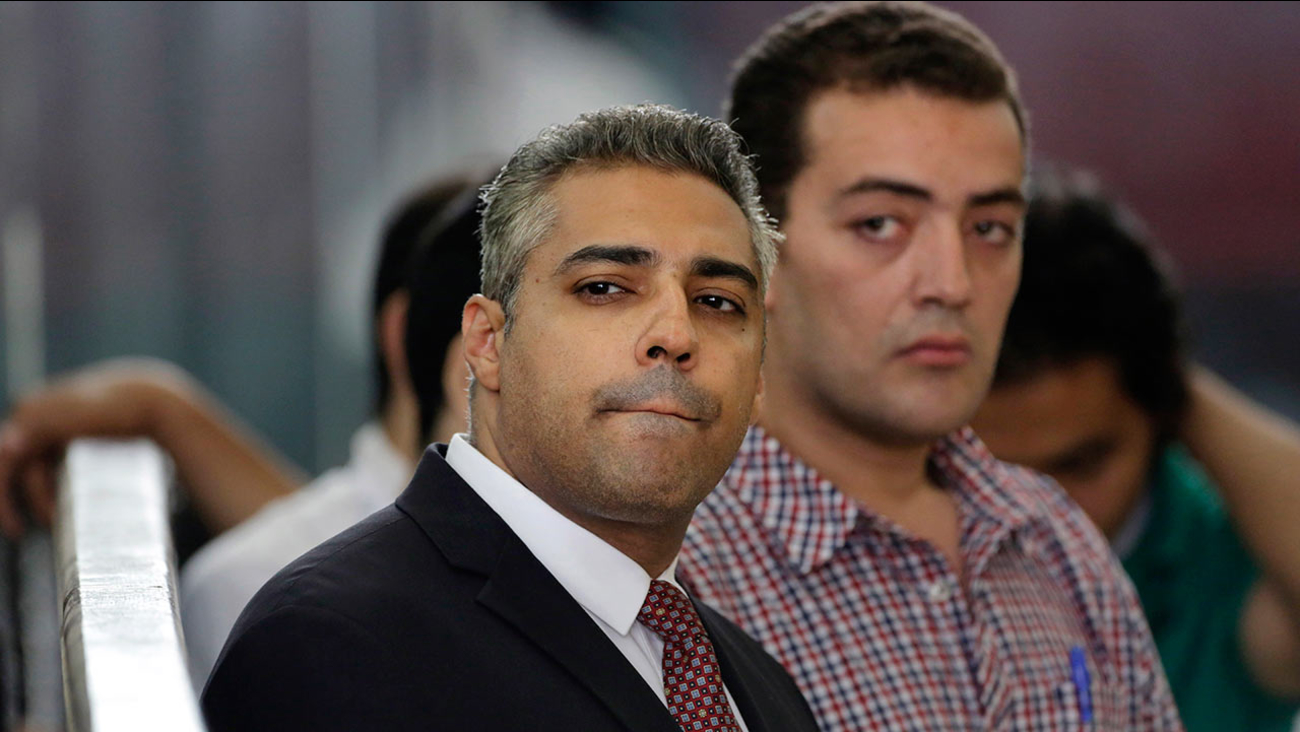 It wasn't immediately clear how the sentence would affect the three men. Greste, earlier deported in February, spoke to Al-Jazeera from Sydney and said he believed an Egyptian appeals court would overturn the verdict. Fahmy and Mohammed, both on hand for Saturday's hearing were immediately taken away by police after the hearing.

"The whole case has been heavily politicized and has not been conducted in a free and fair manner," Souag said in a statement. "There is no evidence proving that our colleagues in any way fabricated news or aided and abetted terrorist organizations and at no point during the long drawn out retrial did any of the unfounded allegations stand up to scrutiny."

Judge Hassan Farid, in his ruling, said he sentenced the men to prison because they had not registered with the country's journalist syndicate. He also said the men brought in equipment without security officials' approval, had broadcast "false news" on Al-Jazeera and used a hotel as a broadcasting point without permission.

"The verdict today sends a very dangerous message in Egypt," said human rights lawyer Amal Clooney, who represented Fahmy. "It sends a message that journalists can be locked up for simply doing their job, for telling the truth and reporting the news. And it sends a dangerous message that there are judges in Egypt who will allow their courts to become instruments of political repression and propaganda."

The case began in December 2013, when Egyptian security forces raided the upscale hotel suite used by Al-Jazeera at the time to report from Egypt. Authorities arrested Fahmy, Greste and Mohammed, later charging them with allegedly being part of Morsi's Muslim Brotherhood, which authorities have declared a terrorist organization, and airing falsified footage intended to damage national security.

At trial, prosecutors used news clips about an animal hospital with donkeys and horses, and another about Christian life in Egypt, as evidence they broke the law. Defense lawyers - and even the judge - dismissed the videos as irrelevant.

Nonetheless, the three men were convicted on June 23, 2014, with Greste and Fahmy sentenced to seven years in prison and Mohammed to 10 years for being found with a spent bullet casing. On Saturday, Mohammed received an additional six months for being in possession of a "bullet," according to the full text of the court decision carried by the Egyptian state news agency MENA. It wasn't immediately clear why Saturday's verdict referred to a "bullet," rather than a spent bullet casing.

The verdict brought a landslide of international condemnation and calls for newly elected President Abdel Fattah el-Sissi, who as military chief led the overthrow of Morsi, to intervene. Egypt's Court of Cassation, the country's highest appeals court, later ordered their retrial, saying the initial proceedings were marred by violations of the defendants' rights.

Egypt deported Greste in February, though he remained charged in the case. Fahmy and Mohammed were later released on bail.

Fahmy was asked to give up his Egyptian nationality by Egyptian officials in order to qualify for deportation. It's not clear why he wasn't deported, though Fahmy said he thinks Canada could have pressed Cairo harder on the matter.

Angered by Al-Jazeera handling of the case, Fahmy has filed a lawsuit in Canada seeking $100 million from the broadcaster, saying that it put the story ahead of employee safety and used its Arabic-language channels to advocate for the Brotherhood. Al-Jazeera has said Fahmy should seek compensation from Egypt.