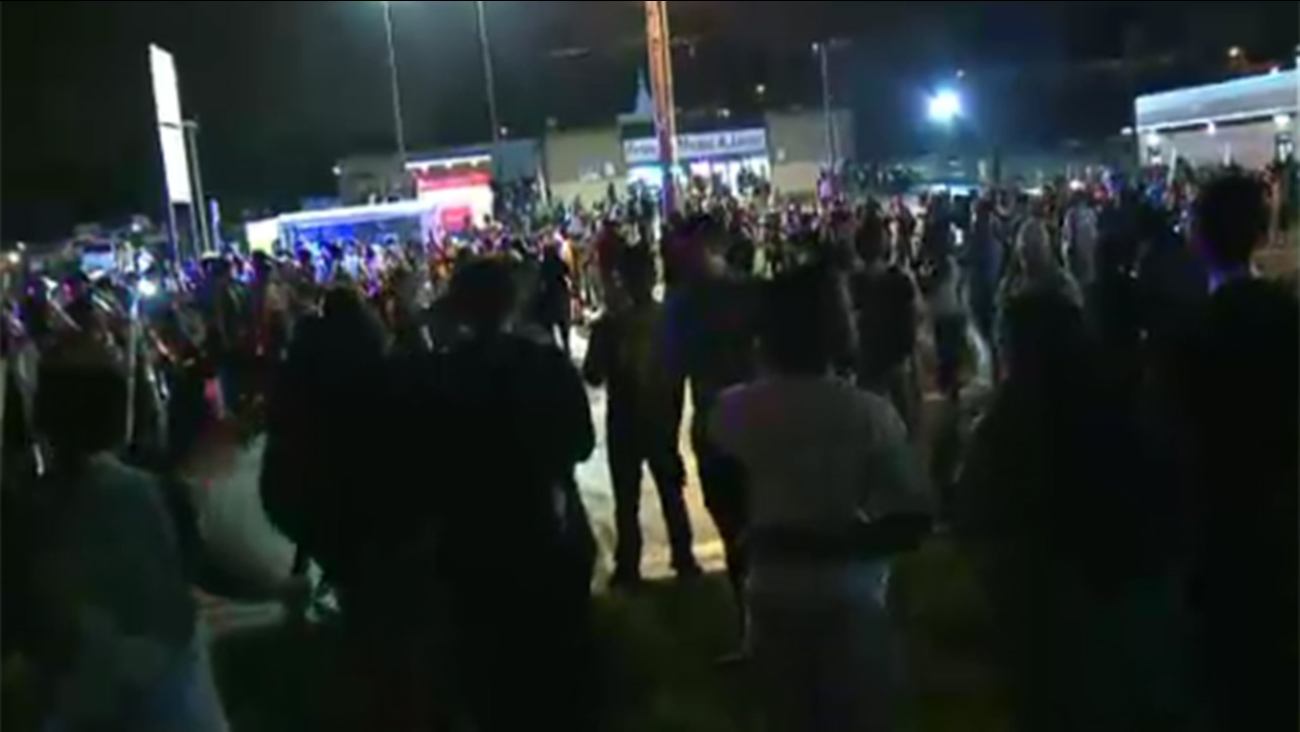 Chief Jon Belmar said at a news conference that officers had been tracking the suspect, who they believed was armed, during a protest marking the death of Brown, the black, unarmed 18-year-old whose killing by a white Ferguson police officer touched off a national "Black Lives Matter" movement.

The suspect approached the plainclothes officers, who were in an unmarked police van, and opened fire, Belmar said. The officers shot back at him from inside the vehicle and then pursued him on foot when he ran.

The suspect again fired on the officers, the chief said, and all four officers fired back. He was struck and fell.

The suspect was taken to a hospital, where Belmar said he was in "critical, unstable" condition. Authorities didn't immediately release the identities of anyone involved, but Tyrone Harris told the St. Louis Post-Dispatch that the injured suspect was his son, 18-year-old Tyrone Harris Jr.

The elder Harris told the newspaper shortly after 3 a.m. that his son had just gotten out of surgery.

None of the officers was seriously injured. All four have been put on standard administrative leave. They were not wearing body cameras, Belmar said.

The shooting happened shortly after a separate incident that the chief called "an exchange of gunfire between two groups" rang out around 11:15 p.m. Sunday while protesters were gathered on West Florissant Avenue, a business zone that saw rioting and looting last year after Brown's killing. The shots sent protesters and reporters running for cover.

The chief said an estimated six shooters unleashed a "remarkable" amount of gunfire over about 45 seconds.

The suspect who fired on officers had a semi-automatic 9 mm gun that was stolen last year from Cape Girardeau, Missouri, according to the chief.

"There is a small group of people out there that are intent on making sure that peace doesn't prevail," he said. "There are a lot of emotions. I get it. But we can't sustain this as we move forward."

Early Monday, another reported shooting drew officers to an apartment building in the area. Two males told police they were targeted in a drive-by shooting near the memorial to Brown outside Canfield Apartments. A 17-year-old was shot in the chest and shoulder while a 19-year-old was shot in the chest, but their injuries were not life-threatening, the St. Louis County Police said in a news release.

For the first time in three consecutive nights of demonstrations, some officers were dressed in riot gear, including bullet-proof vests and helmets with shields. Police at one point early Monday shot smoke to disperse the crowd that lingered on West Florissant, Belmar said.

One officer was treated for cuts after a rock was thrown at his face, and two officers were pepper-sprayed by protesters, county police spokesman Officer Shawn McGuire said in an email. Five people were arrested, according to records McGuire released.

Several other peaceful events earlier Sunday were held to mark the anniversary.

Brown's father, Michael Brown Sr., led a march through town. It started at the site where Brown was fatally shot by officer Darren Wilson. A grand jury and the U.S. Department of Justice declined to prosecute Wilson, who resigned in November.

Later, a few hundred people turned out at Greater St. Mark Family Church for a service to remember Brown, with his father joining other relatives sitting behind the pulpit.

Organizers of some of the weekend activities pledged a day of civil disobedience on Monday, but have not offered specific details.