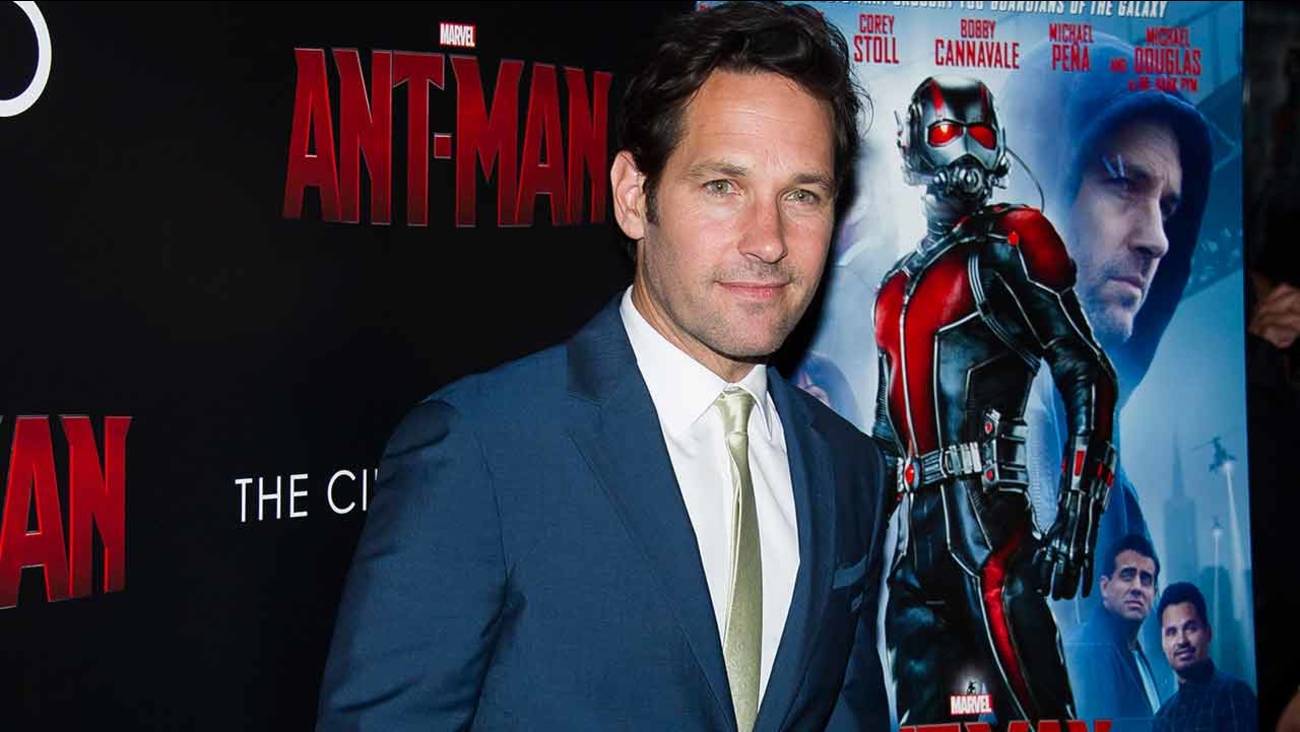 Paul Rudd attends a special screening of "Ant-Man" hosted by The Cinema Society and Audi at the SVA Theatre on Monday, July 13, 2015, in New York. (Photo by Charles Sykes/Invision/AP)

The result for "Ant-Man" didn't match some of Marvel's better known and brawnier properties. But "Ant-Man" - a relatively inexpensive superhero movie with a $130 million budget - still dominated North American multiplexes, edging out the little yellow guys of Universal's "Minions," which took in $50.2 million in its second week.

"Ant-Man," starring Paul Rudd as a slightly more irreverent and distinctly smaller superhero, came in a little below earlier stand-alone Marvel films like "Thor" ($65.7 million in 2011) and "Captain America: The First Avenger" ($65.1 million in 2011).

Dave Hollis, head of distribution at Disney, credited Marvel for successfully expanding its universe both in tone and audience makeup. The movie, a more humorous heist film, appealed more to women (42 percent of the audience) and families (28 percent) than most Marvel releases.

"Most encouragingly in this one, the exit scores we're seeing from women - their likelihood to recommend and how much they enjoyed the film - was higher here than almost any film we've had," Hollis said. "It's a great sign for what word of mouth should be for the run, but, two, what it means for how women think about these movies being for them as much as men might."

The next question will be whether the result was strong enough to kick start an "Ant-Man 2." Though "Ant-Man" had a rocky path to the screen, with director Peyton Reed replacing Edgar Wright shortly before shooting commenced, its CinemaScore from audiences is an A. It took in $56.4 million abroad.

The opening was closest to 2008's "The Incredible Hulk" ($55 million), the poorly received Edward Norton edition that didn't spawn further installments. Rudd is already to appear as Ant-Man in "Captain America: Civil War."

"I say this was a success," said Paul Dergarabedian, Rentrak's senior media analyst. "This was never predestined to open with $80 (million) or $100 million. Marvel continues to evolve and surprised the audience. This was about a perfectly solid result for a brand new property."

The $30.2 million opening for Schumer's big-screen debut, "Trainwreck," which the comedian also wrote, earned an estimated $30.2 million, making the R-rated Universal release one of the biggest comedy successes this summer. It's also the second best opening for Judd Apatow as a director following "Knocked Up."

Already a critically acclaimed star on Comedy Central for her sketch show "Inside Amy Schumer," Schumer's transition to movies has drawn good reviews and opened above expectations, further showing the power of female moviegoers. The audience was two-thirds women, Universal said.

"Amy Schumer is an absolute talent and should have a great career in the movies," said Nick Carpou, distribution head for Universal. "The character that she portrays very effectively enables modern women."

Opening in just five locations was Woody Allen's "Irrational Man," starring Joaquin Phoenix and Emma Stone. The Sony Pictures Classic release packed those theaters for an average of $37,623 per screen.