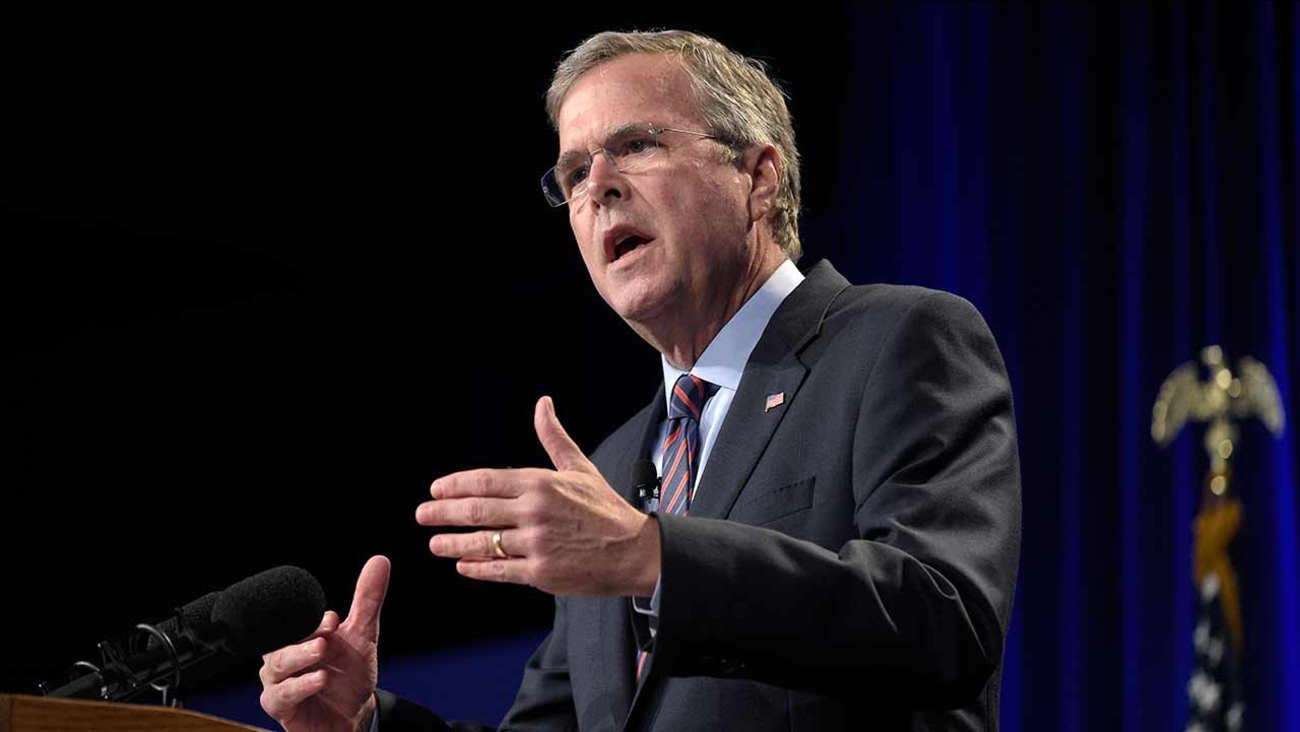 MIAMI, FL -- Jeb Bush launched a Republican presidential bid months in the making Monday with a vow to get Washington "out of the business of causing problems" and to stay true to his beliefs - easier said than done in a bristling primary contest where his conservative credentials will be sharply challenged.

"I will campaign as I would serve, going everywhere, speaking to everyone, keeping my word, facing the issues without flinching," Bush said in his prepared remarks, opening his campaign at a rally near his south Florida home at Miami Dade College, where the institution's large and diverse student body symbolizes the nation he seeks to lead.

The former Florida governor, whose wife is Mexican-born, was addressing the packed college arena in English and Spanish, an unusual twist for a political speech aimed at a national audience.

"In any language," Bush said, "my message will be an optimistic one because I am certain that we can make the decades just ahead in America the greatest time ever to be alive in this world."

Bush enters a 2016 Republican contest that will test both his vision of conservatism and his ability to distance himself from family.

Neither his father, former President George H.W. Bush, nor his brother, former President George W. Bush, attended Monday's announcement. The family was represented instead by Jeb Bush's mother and former first lady, Barbara Bush, who once said that the country didn't need yet another Bush as president, and by his son George P. Bush, recently elected Texas land commissioner.

Before the event, the Bush campaign came out with a new logo - Jeb! - that conspicuously leaves out the Bush surname.

Bush joins the race in progress in some ways in a commanding position, in part because of his family connections.

He has probably raised a record amount of money to support his candidacy and conceived of a new approach on how to structure his campaign, both aimed at allowing him to make a deep run into the GOP primaries. But on other measures, early public opinion polls among them, he has yet to break out.

While unquestionably one of the top-tier candidates in the GOP race, he is also only one of several in a large and capable Republican field that does not have a true front-runner.

In the past six months, Bush has made clear he will remain committed to his core beliefs in the campaign to come - even if his positions on immigration and education standards are deeply unpopular among the conservative base of the party that plays an outsized role in the GOP primaries.

Tea party leader Mark Meckler on Monday said Bush's positions on education and immigration are "a nonstarter with many conservatives."

"There are two political dynasties eyeing 2016," said Meckler, a co-founder of the Tea Party Patriots, one of the movement's largest organizations, and now leader of Citizens for Self-Governance. "And before conservatives try to beat Hillary, they first need to beat Bush."

Yet a defiant Bush has showed little willingness to placate his party's right wing.

Instead, he aimed his message on Monday at the broader swath of the electorate that will ultimately decide the November 2016 general election. Minority voters, in particular, have fueled Democratic victories in the last two presidential elections.

Bush has made minority outreach a priority since he began exploring a possible bid in December.

In a video for the event, showing women, minorities and a disabled child, Bush says "the most vulnerable in our society should be in the front of the line and not the back." This calls for "new leadership that takes conservative principles and applies them so that people can rise up."

Of the five people on the speaking program before Bush, just one was a white male. The others included R.B. Holmes, the African-American pastor of a Tallahassee Baptist church, and Berthy De La Rosa-Aponte, described as a Bush friend and "noted Florida advocate for individuals and children with disabilities."

Bush is one of 11 major Republicans in the hunt for the nomination. Wisconsin Gov. Scott Walker and Ohio Gov. John Kasich are among those still deciding whether to join a field that could end up just shy of 20.

Bush's critics in both parties have criticized him as aggressively as they would if he were the clear Republican favorite.

Kentucky Sen. Rand Paul said Monday there's "Bush-Clinton fatigue" in America. "I think some people have had enough Bushes and enough Clintons," Paul said in an interview with The Associated Press.

After touring four early-voting states, Bush quickly launches a private fundraising tour with stops in at least 11 cities before the end of the month. Two events alone - a reception at Union Station in Washington on Friday and a breakfast the following week on Seventh Avenue in New York - will account for almost $2 million in new campaign cash, according to invitations that list more than 75 already committed donors.

"We will take Washington - the static capital of this dynamic country - out of the business of causing problems," Bush Monday and added, "I will take nothing and no one for granted. I will run with heart. I will run to win."
Related topics:
politicspresidential racewashington politicscampaignu.s. & world
Copyright © 2021 by The Associated Press. All Rights Reserved.
TOP STORIES
Isolated street flooding possible ahead of a rare June front overnight
Houston records over 100 more homicides compared to June 2019
14-year-old shot in face in argument over girl, deputies say
Mayor pledges $10K to catch a great-grandmother's killers
Memoir 'On Juneteenth' reflects on life in segregated Conroe
Former Sheldon ISD teacher accused of having sex with student
Former Houston mayoral candidate hopes to bring 3rd political party to Texas
Show More
Luby's finds buyer for cafeteria brand and 32 Texas restaurants
8 arrested during protest outside of Sen. Ted Cruz's home
Woman believed to be dismembered last seen alive 3 years ago
Woman with gunshot wound found in street near middle school
1 killed when SUV slams into pickup on Eastex Fwy
More TOP STORIES News