Leander Dewey Jones was arrested by the Raleigh Police Department on 12 counts of second-degree sexual exploitation of a minor. The charge generally refers to downloading child pornography but not manufacturing it.

"This all arose on May 29 when an officer with the Raleigh Police Department responded to Computer Sales Place in Raleigh," a prosecutor told the judge in a Wake County Justice Center courtroom. "A technician there was attempting to diagnose the issue and saw what appeared to be child pornography."

The investigation led police and FBI Child Exploitation Task Force to Jones' home on Brentwood Road in Raleigh. There they found numerous files of downloaded images of children as young as 6 years old. The total amount of files, the prosecutor only described as crossing the federal threshold.

"Scary, you get goose bumps," said Shane Watkins, who lives just down the street from Jones. "Especially when we have a bunch of kids that ride bikes and I have two of my own, so it's very troubling to know that."

A search of his home also turned up that not only has he worked as a Santa Claus for the holidays, but business cards also showed that he advertises himself as a magician and a pirate for children.

Prosecutors said investigators also found a small "spy" camera that was set up in the bathroom. They're also investigating concerns he may have harmed children in his own family.

Each of the 12 counts against Jones carrying a charge of just more than seven years in prison.

A profile on the Triangle Santa Buddies website listed Jones as "Santa Lee Jones" and that he joined the organization in 2014. The profile has since been removed. 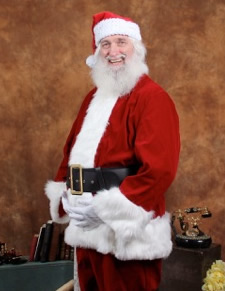 Jones posing in a Santa costume from the Triangle Santa Buddies website.

Jones' next court date is set for June 22.