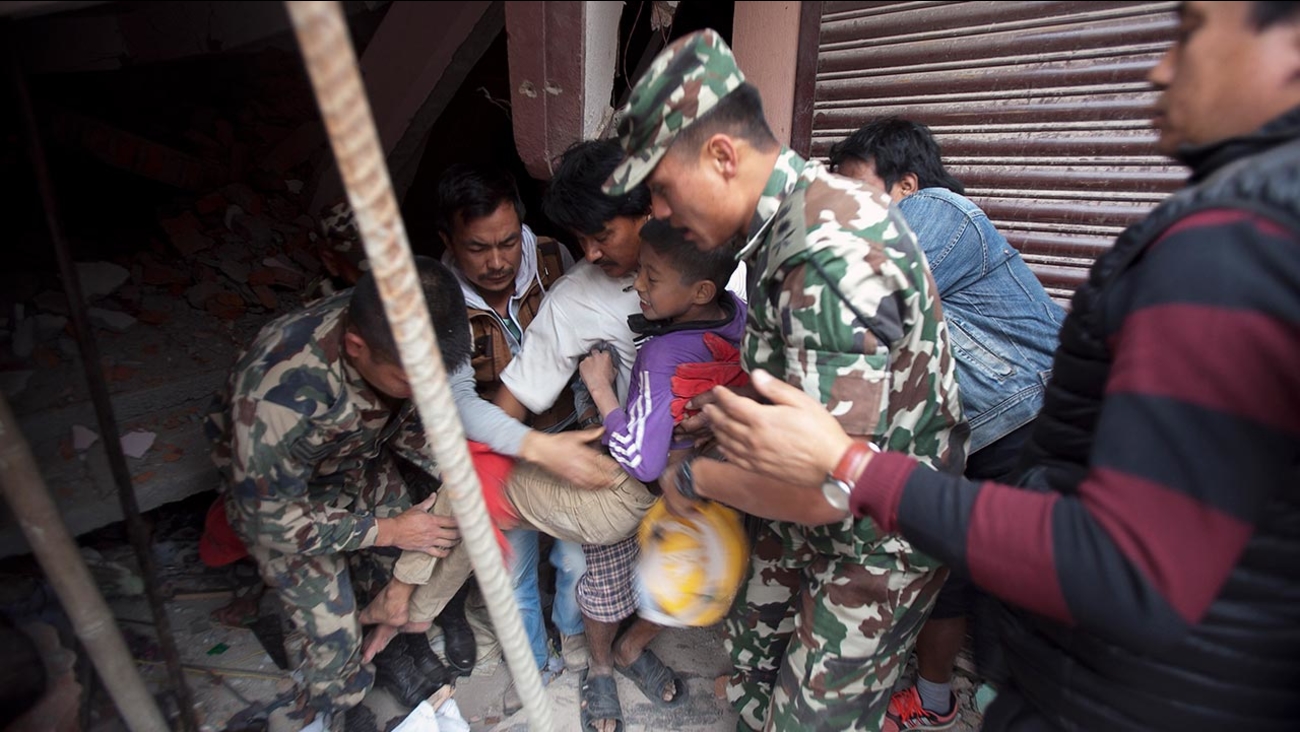 Volunteers carry an injured boy after rescuing him from the debris of a building that was damaged in an earthquake in Kathmandu, Nepal, Saturday, April 25, 2015 (AP Photo/ Niranjan Shresth)

LONDON, England -- World leaders and global charities offered condolences and emergency aid to Nepal following the earthquake Saturday while grappling to understand the scope of a disaster that left more than 1,100 dead.

With Internet and cellphone communications spotty, and many roads closed due to damage, the outside world did not yet have a clear picture of what is most needed following the devastating quake.

But it was clear that help was needed - and fast.

"We know the damage is extensive and that access into rural areas will be very, very difficult for everybody," said Ben Pickering, Save the Children's humanitarian adviser in Britain.

"Children will be affected in many ways. Physical injuries. Separated from families," he said. "The priority now is understanding the scale, what the emergency needs are right now and in the coming weeks."

Charities assembled disaster teams based on the assumption that sanitation, shelter and medical help are urgently required but the most convenient pathway into Nepal - one of the world's poorest countries - was not available because the international airport in Kathmandu was shut down.

Doctors Without Borders said four teams would leave Sunday morning for Nepal from Bihar state in India, close to the Nepal border. The organization is also sending in 3,000 kits including medical supplies.

AmeriCares has also sent a team from India and is preparing shipments of medical aid and relief supplies. "We are prepared to help any way that we can," said AmeriCares President and CEO Michael J. Nyenhuis. "This is a terrible tragedy and our hearts go out to the families suffering."

Handicap International, which was already established in Nepal with 47 workers, was also offering assistance.

"One of our projects there, because it's earthquake-prone, is to help hospital staffs, physical therapists and others to anticipate the kind of injury we tend to see after a quake," said spokeswoman Mica Bevington. "And we're sharing our resources, like all our wheelchairs are going to two hospitals in need."

French aid group Doctors of the World (Medecins du monde) said it has mobilized its workers in Nepal - based in Kathmandu and Chautara to work on maternal and infant health - to help quake victims. It is sending more staffers and medical aid to the region immediately.

Mercy Corps, based in the United States, was checking on the safety of the large team it already had on the ground in Nepal and assessing the conditions there.

"As we better understand the needs on the ground, we will respond as appropriately," said CEO Neal Keny-Guyer said.

Countries around the globe pledged aid while Pope Francis offered his prayers for the victims and those working to save them.

"His Holiness commends the souls of the victims to the loving mercy of the Almighty and he offers encouragement to the civil authorities and emergency personnel as they continue their rescue efforts and assistance to those touched by this tragedy," Vatican Secretary of State, Cardinal Pietro Parolin, said in a statement.

.@USEmbassyNepal is accounting for U.S. citizens after #NepalEarthquake. U.S. citizens in need of assistance should call +977 1 423 4068.

The European Union is considering "some budget support" to Nepal, according to a joint statement by the EU's foreign policy chief, development chief and humanitarian chief. It did not provide details or amounts.

"The full extent of the casualties and damage is still unknown but reports indicate they will likely be high, both in terms of loss of life, injuries and damage to cultural heritage," they said.

British Prime Minister David Cameron, German Chancellor Angela Merkel and other leaders also promised help for Nepal. Cameron said on Twitter that Britain "will do all we can to help those caught up in it."

The U.S. Embassy in Nepal announced $1 million in initial aid and the U.S. Agency for International Development activated an urban search and rescue team. The U.S. State Department also set up an email address and phone number for anyone who knows of U.S. citizens needing assistance in Nepal.

"We are working closely with the government of Nepal to provide assistance and support," said Secretary of State John Kerry. "To the people in Nepal and the region affected by this tragedy we send our heartfelt sympathies. The United States stands with you during this difficult time."

Norwegian Foreign Minister Boerge Brende said the Scandinavian country would allocate 30 million kroner ($3.8 million) to aid work, and that the money would be sent through the United Nations and charitable organizations.

"We are following the situation closely and we will find out whether to contribute further when we know more," Brende said in a statement.

Italy's Foreign Ministry said it has made available 300,000 euros ($326,000) of emergency aid for earthquake victims. The aid will be channeled through the International Red Cross.

French President Francois Hollande said France is "ready to respond to requests for help and assistance" from Nepalese authorities. The tiny, wealthy country of Monaco said it would send emergency aid "in the coming hours."

Among other countries sending condolences was Mexico, which suffered an 8.1-magnitude earthquake that killed an estimated 9,500 people in the nation's capital in 1985. Mexico's foreign ministry said it stood in solidarity with the government of Nepal and the relatives of the earthquake victims.