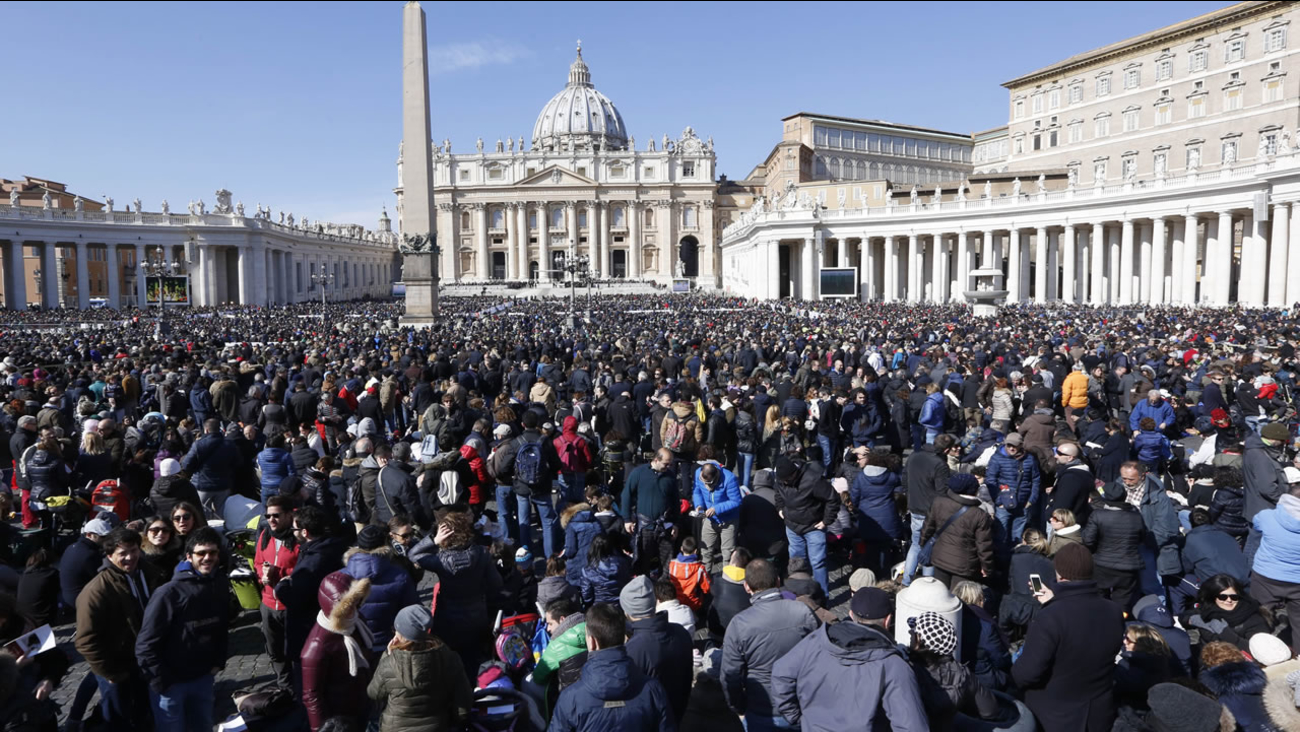 Faithful crowd St. Peter's Square on the occasion of a meeting of Pope Francis with members of CL, "Communion and Liberation" movement, at the Vatican, Saturday, March 7, 2015. (AP Photo/Riccardo De Luca)

MILAN, Italy -- Islamic extremists suspected in a bomb attack in a Pakistani market that killed more than 100 people had also planned an attack against the Vatican in 2010 that was never carried out, an Italian prosecutor said Friday.

The alleged foiled plot, known to authorities for years, was revealed as prosecutors announced the results of a decade-long investigation into an Italy-based terror network that aimed to stop Pakistan's actions against the Taliban. Police arrested nine suspects related to the probe Friday throughout Italy. Another nine were being sought, three of whom were believed to still be in the country.

Wiretaps collected as part of the investigation gave "signals of some preparation for a possible attack" at the Vatican, prosecutor Mauro Mura told a news conference in Cagliari, Sardinia. That included the arrival in Rome of a Pakistani suicide bomber, Mura said.

The Pakistani eventually left Italy, Mura said, without explaining why. The Italian news agency ANSA reported that there were two suicide bombers and that they were warned off by their associates in Italy when police began executing search warrants in the wider investigation of the Italy-based Islamic terror network.

The Vatican downplayed the significance of the alleged plot.

"From what it appears, this concerns a hypothesis that dates from 2010 which didn't occur. It has therefore no relevance today and no reason for particular concern," said the Rev. Federico Lombardi, the Vatican spokesman.

At the time of the suspected plot to bomb the Vatican, Pope Benedict XVI was still reeling from the effects in the Muslim world of a 2006 speech in Regensburg, Germany, in which he quoted a Byzantine emperor who characterized some of the teachings of the Prophet Muhammad as "evil and inhuman," particularly "his command to spread by the sword the faith."

While relations with the Muslim world were eventually repaired, tensions flared again in 2011 when Cairo's al-Azhar institute, the pre-eminent theological school of Sunni Islam, suspended interfaith talks with the Vatican after Benedict called for greater protections for Egypt's minority Christians.

More recently, Italian officials have made clear they take seriously the threat of the Islamic State group to conquer Rome and the seat of Christianity. Security has been beefed up at the Vatican and the head of the Swiss Guards has said they are ready but that they have no information about an imminent threat.

Pope Francis himself has said he realizes he may be a target but that he fears mostly for the innocent crowds who come to see him every time he's in public.

"We are all exposed and we are all afraid," said the Vatican secretary of state, Pietro Parolin. "But the pope is very calm for this, it's enough to watch him meeting people with great clarity and serenity."

The investigation was launched in 2005, but Mura said it was slowed when news of the investigation leaked to the media, alerting the suspects that they were being watched. He also said the process of translating the wiretaps was painstaking.

Authorities said some of five of the suspects were responsible for plotting "numerous bloody acts of terrorism in Pakistan," including the October 2009 explosion in a market in Peshawar in which more than 100 people died. That attack happened on the same day that then-Secretary of State Hillary Clinton visited the Pakistani capital, Islamabad, Mura noted.

Some of the suspects were also suspected of organizing attacks against Pakistani police and security forces that were carried out between March 2011 and November 2011, leaving five people dead, Mura said.

The terror ring also was a source of funding for terror operations in Pakistan, gathering donations from the Pakistani and Afghan community in Italy. It also illegally smuggled into Italy Pakistani and Afghani citizens who arrived by plane with false papers.

One of the suspects arrested Friday had a construction business in Sardinia that participated in work for a Group of Eight summit planned for Sardinia but that was later moved to quake-stricken Aquilia, in Abruzzo to boost reconstruction. Another was an imam in the northern province of Bergamo.

Mura also said some of the suspects had very close ties to al Qaida leader Osama bin Laden, and that wiretaps included phone calls inquiring about his health. Two were part of bin Laden's security detail, a press release said.

Police said the aim of the terror network was to create an insurrection against the Pakistani government.
Related topics:
vatican citypopeu.s. & world
Copyright © 2021 by The Associated Press. All Rights Reserved.
More Videos
From CNN Newsource affiliates
TOP STORIES