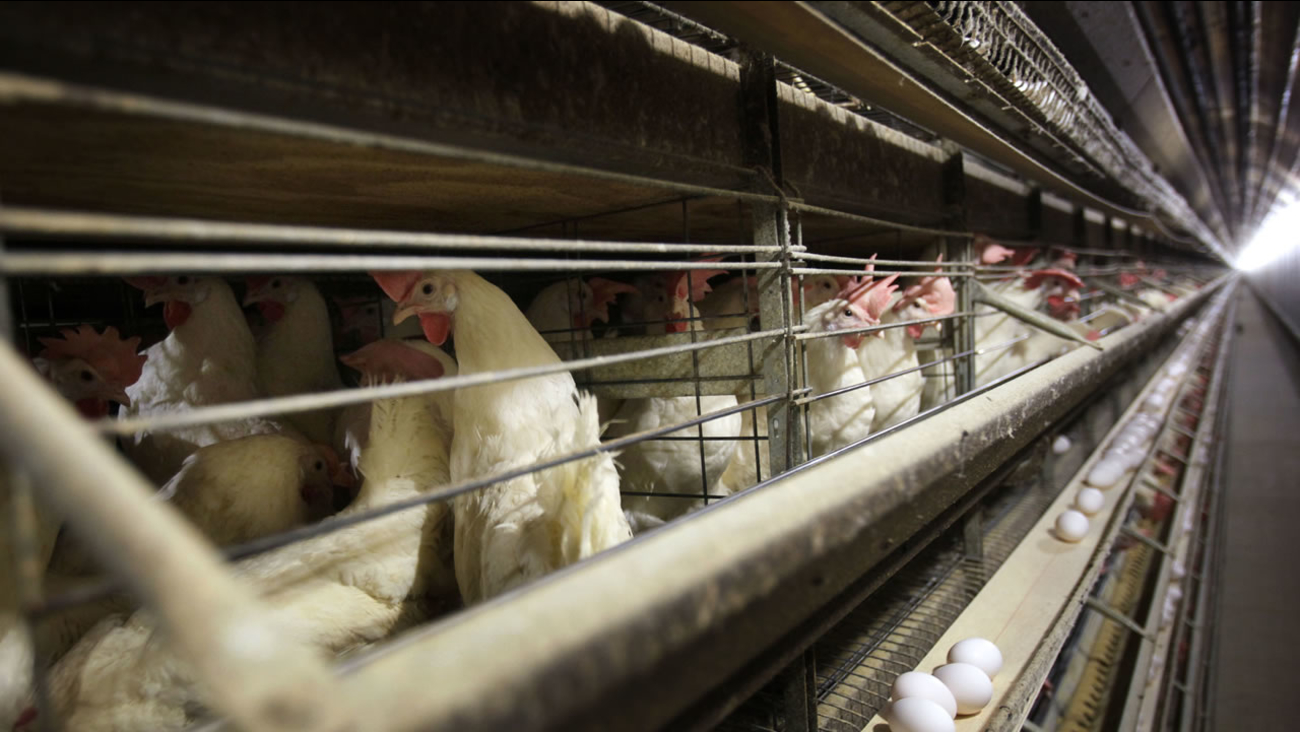 In this Nov. 16, 2009 file photo, chickens stand in their cages at a farm near Stuart, Iowa. (AP Photo/Charlie Neibergall, File)

AP
DES MOINES, IA -- Up to 5.3 million hens at an Iowa farm must be destroyed after the highly infectious and deadly bird flu virus was confirmed, the U.S. Department of Agriculture said Monday.

The farm in northwest Iowa's Osceola County has nearly 10 percent of the state's egg-laying hens. Iowa is home to roughly 59 million hens that lay nearly one in every five eggs consumed in the country.

Egg industry marketing experts say it's too early to predict the impact on prices, but say it's unlikely to immediately cause a spike or a shortage, because number of chickens that are to be euthanized is a little more than 1 percent of the nation's egg layers.

Several Midwestern states have been affected by the outbreaks, costing turkey and chicken producers nearly 7.8 million birds since March. The virus was first detected in Minnesota, the country's top turkey-producing state, in early March and the H5N2 virus has since shown up on commercial farms in Arkansas, Iowa, Missouri, North Dakota, South Dakota and Wisconsin. On Monday, the virus was confirmed in another turkey farm in Minnesota and a backyard flock of mixed birds in Wisconsin.

"It may not have a direct effect on shell egg pricing but any time you take production out of a marketplace there's likely to be some consequence," Iowa Poultry Association Executive Director Randy Olson said. "I anticipate the market and production will recover, but right now we're reminding people that this is not a food safety issue and it's not a human health issue."

Olson said he's confident authorities have identified the extent of the outbreak and have a plan to control it.

It's the first chicken farm in Iowa to be affected by the virus, which was confirmed at a turkey farm in the state last week.

The chickens on the large operation reside in more than 20 houses, said Dustin Vande Hoef, a spokesman for Iowa Agriculture Secretary Bill Northey.

"It's a huge challenge for this producer and highlights the importance of biosecurity and other producers trying to take steps to limit the spread of this disease," he said.

The Center for Disease Control and the Iowa Department of Public Health considers the risk to people from these infections in wild birds, backyard flocks and commercial poultry, to be low. No human infections with the virus have ever been detected.
Related topics:
health & fitnessfluu.s. & worldfarming
Copyright © 2020 by The Associated Press. All Rights Reserved.
More Videos
From CNN Newsource affiliates
TOP STORIES