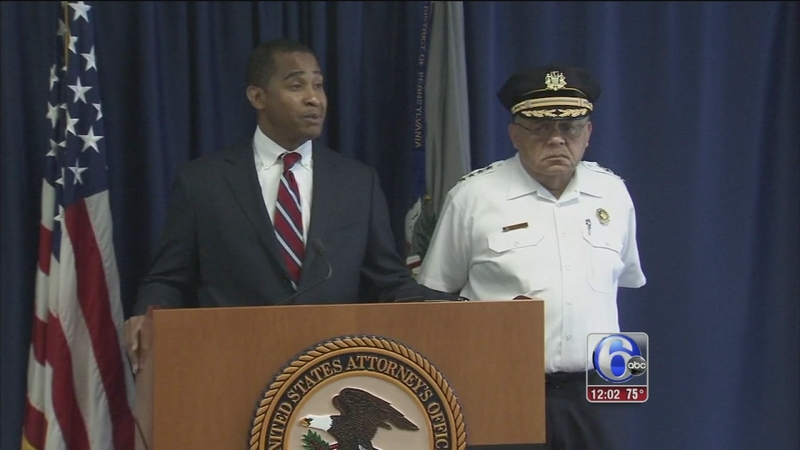 The 26 count federal indictment alleges that the officers abused their positions to rob and extort suspected drug dealers and falsified police reports to cover up their alleged activity.

At a press conference Wednesday morning Philadelphia Police Commissioner Charles Ramsey said, "I have been a police officer for more than 40 years and this is one of the worst cases of corruption that I have ever heard."

For a link to the photos, click or tap here

United States Attorney Zane Memeger says between February of 2006 and November of 2012 the officers engaged in a racketeering conspiracy that included robbery, extortion, kidnapping, and drug dealing.

The U.S. Attorney alleges that the officers would routinely stop the vehicles and enter and search the properties of suspected drug dealers, using threats and physical violence to steal property, cash and drugs in the process.

In February Walker pleaded guilty to robbery and using a gun during a violent crime, stealing $15,000 in cash and drugs from a suspected drug dealer.

Walker flipped on the officers charged in the indictment.

The probe has been known for month, and Commissioner Ramsey pulled four of the officers off of street duty.

"Words just don't describe the degree in which this has brought discredit upon not only these individual officers, but their families, the police department, the entire city, and the profession of policing," Ramsey said.

The indictment outlines 22 separate incidents, the result of which allegedly netted the officers more than $500,000 in cash, drugs and property.

Memeger provided several examples of the alleged acts committed by the officers.

On October 16, 2007 Thomas Liciardello and Brian Reynolds, along with Jeffery Walker, allegedly stopped a vehicle and seized $30,000 from a man identified in the indictment as R.K..

The indictment says the officers divided the money among themselves, then took R.K. to the 5th police district where they illegally kept him in a cell without processing him for arrest.

While R.K. was being held, the officers allegedly went to his residence, without a warrant, and confiscated a safe containing $80,000, which they then stole and split.

On November 26, 2007 Linwood Norman allegedly lifted a person, identified as N.C., off his feet and leaned N.C. over an 18-story balcony railing while Liciardello, Betts, Spicer and Norman stole $8,000 in cash and property.

On February 7, 2008 Liciardello and some of the other officers allegedly broke into a residence, and Liciardello allegedly threatened to shoot the resident, identified as J.L., in an effort to steal $16,000.

The indictment says that on September 6, 2009 Norman and Walker allegedly stole several kilograms of cocaine, which they then distributed.

On February 24, 2010 Michael Spicer allegedly punched victim J.K. in the mouth, then dangled J.K. off a balcony 35 feet off the ground while Liciardello, Reynolds, and Betts stole approximately $79,000 and a Calvin Klein suit.

On June 23, 2011 Thomas Liciardello allegedly kicked a man, identified as W.L., in the mouth, breaking his teeth, while others alleged struck him in the groin and hit him in the back of the head with a steel bar. This was done in an effort to allegedly steal $34,000.

The indictment lays out a long list of criminal conduct by the officers, including RICO conspiracy, conspiracy to deprive individuals of their civil rights, deprivation of civil rights, Hobbs Act robbery, extortion, carrying a firearm during a crime of violence, falsifying records, and possession of cocaine with intent to distribute.

If convicted, the officers face maximum sentences that range from 40 years imprisonment to life imprisonment.