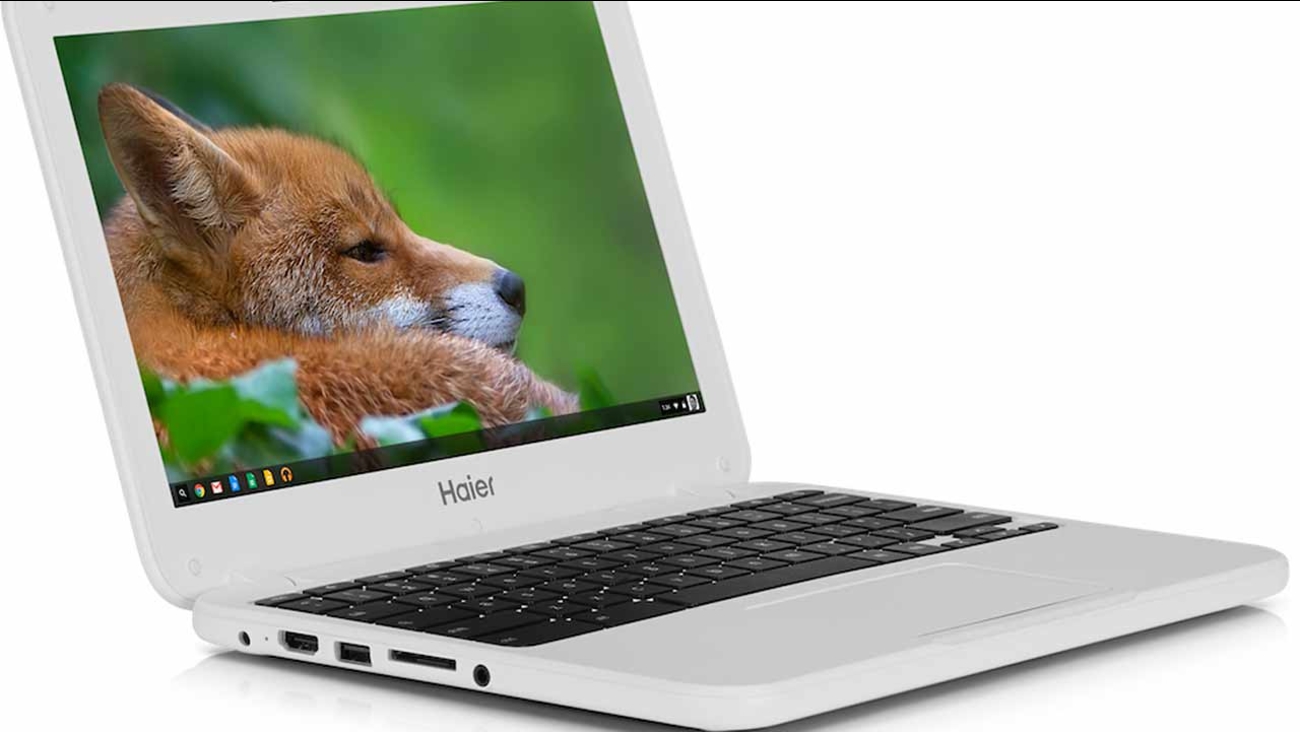 Various PC manufacturers have been working with Google to design lightweight laptops running on the Chrome operating system since 2011. The newest versions are made by Hisense and Haier. Hisense's Chromebook can be ordered beginning Tuesday at Walmart.com and Haier's version can be bought at Amazon.com.

Their arrival coincides with Microsoft's rollout of a lower-priced Surface tablet in an effort to reach students and budget-conscious families. Pre-orders for that device began Tuesday, too.

As the prices for tablets and smartphones have been declining, it has forced on PC makers to lower their prices, said International Data Corp. analyst Jay Chou. The success of the Chromebook line is intensifying the PC pricing pressure.

"It has been good news for consumers, but not so good for vendors," Chou said.

The cheaper version of the Surface Pro 3 sells for $499, compared with $799 to $1,949 for the higher-end models. The discounted version has a slightly smaller screen - 10.8 inches rather than 12 - a slower processor, and less flexible kickstand - just three angles rather than unlimited positions.

The Chromebook has served a dual purpose for Google. Like the company's Android software for mobile devices, the Chrome system is set up so users will automatically begin using Google's search engine and other services, such as Gmail and YouTube. Google has used the Chromebooks as a prod to bring down the prices of all PCs, something the company wanted to do because it has more opportunities to show the digital ads that bring in most of its revenue when more people can afford to buy an Internet-connected device.

"We cannot be happier that Microsoft is helping drive down the prices of PCs," said Caesar Sengupta, Google's vice president of product management for Chromebooks. "If Microsoft is reacting to (Chromebook's low prices), that's fantastic. We love it."

Unlike most computers, Chromebooks don't have a hard drive. Instead, they function as terminals dependent on an Internet connection to get most work done.

Despite those limitations, Chromebooks have been steadily gaining in popularity, particularly in schools, as more applications and services made available over Internet connections - a phenomenon known as "cloud computing" that has reduced the need for hard drives.

Besides the $149 laptops, Google also is attacking Microsoft on other fronts. Later this spring, Google and Asus are releasing a hybrid Chromebook that can use used as either a laptop or tablet with a 10-inch screen. Called the Chromebook Flip, it will sell for $249.

In the summer, Asus and Google will start selling a new Chrome device that will provide people a cheaper way to upgrade an old PC. The device, called the Chromebit, is a stick loaded with an entire operating system that can be plugged into any HDMI port. The Chromebit's price hasn't been set, Google says it will cost less than $100.

Here's what you need to know about the cheaper Surface Pro 3 and new Chromebooks:

PROS AND CONS OF THE SURFACE

Graphic artists, engineers and finance professionals needing to run complex software might still want the company's higher-end Pro 3, said Dennis Meinhardt, director of program management for Surface. But the Surface 3 should be good for everyday tasks, he said, and brings the Pro 3's premium feel to a device that will be affordable to more people.

The new Surface model is thinner and lighter, partly because it gets rid of the fan - similar to Apple's new MacBook laptop. At 214 pixels per inch, the screen resolution is comparable to the Pro 3's.

Battery life is promised at 10 hours for video playback. The Surface 3 runs the regular version of Windows 8.1, just like the Pro 3. In the past, Microsoft has used a lightweight version called RT in its cheaper tablets. The Surface 3 also has a USB port, a feature that distinguishes the Surface line from most rival tablets.

SIZING UP THE CHROMEBOOKS

Both the Hisense and Haier models have 11.6 inch screens, 2 gigabits of memory and run on Rockchip processors. The Hisense machine promises up to 8.5 hours of battery power per charge while Haier is touting up to 10 hours of power per charge on a battery that can be removed for easier replacement.