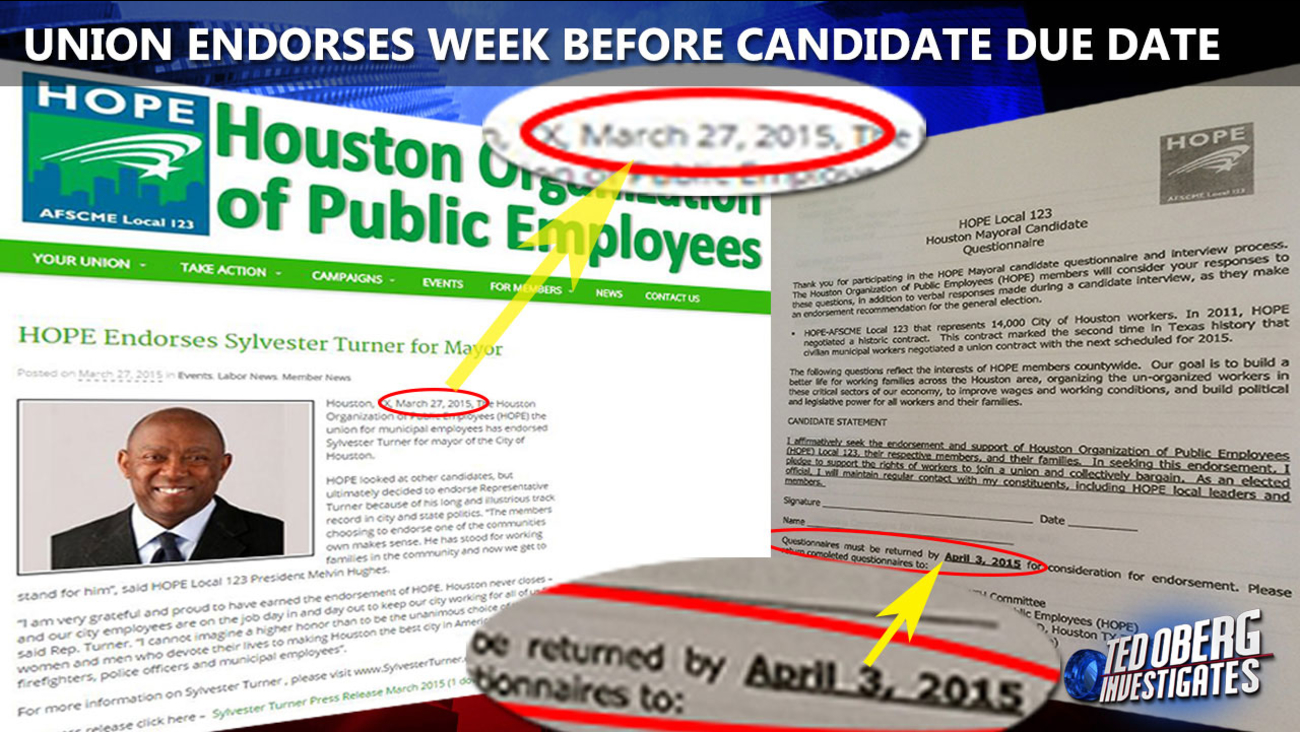 KTRK
By Ted Oberg
The city municipal employees union brass announced its choice for the next Houston mayor a week before its own questionnaires to mayoral candidates were due back at the union hall.

"It's unfair and a little surprising." said Marty McVey, a Houston mayoral hopeful who was finalizing his questionnaire Friday when the Houston Organization of Public Employees announced its pick. "I don't know what would make them contradict their own processes. It certainly makes you wonder."

HOPE's pick for mayor is Sylvester Turner, announced Friday. That's seven days before the union's own deadline for its questionnaire and interview process. And a full day before Turner's own Saturday announcement for mayor.

"Questionnaires must be returned by April 3, 2015 for consideration for endorsement," the cover letter for HOPE's mayoral candidate questionnaire reads.

You can see the cover letter by clicking here.

"HOPE looked at other candidates, but ultimately decided to endorse Representative Turner because of his long and illustrious track record in city and state politics," HOPE Local 123 President Melvin Hughes said in a Friday press release. "He has stood for working families in the community and now we get to stand for him."

The questionnaire and the prospect of a future endorsement in the crowded mayoral race for America's fourth-largest city was announced March 14 at an AFL-CIO forum event for mayoral hopefuls.

The union sent out the same questionnaire with an earlier deadline of February 13 was given to several candidates in January who were seen as early prospects. Turner's completed questionnaire was among that earlier batch. At least McVey and Stephen Costello, who announced his candidacy March 9, had received the questionnaire with the April 3 deadline date.

A spokesman for Costello declined to comment on the union timeline but did say that "While we respect those who disagree with Council Member Costello's stance on pension reform, we feel confident voters want a mayor who is focused on local control of our pensions."

"They read all the questionnaires that were returned by the candidates," Hawthorne said. "They haven't received any more."

She said the union created an April 3 deadline "as a courtesy." She could not give specific reasons on why the union didn't wait until that date to make a decision except to say it was a decision of union leadership.

HOPE's pick comes in the wake of Houston's fire and police unions backing Turner for mayor this week in unusually early endorsements that also raising questions about how much time opposing candidates had to compete for the union's support.

For example, other candidates are expected to announce. And Sheriff Adrian Garcia, under the Texas Constitution, would have to resign as a county official immediately upon declaring his candidacy and therefore would not have any chance at getting HOPE's blessing under the union's rules.

ABC-13 has calls into the other mayoral candidates and to the union member who headed the committee vetting the candidates and will update this report if they respond.
Related topics:
houstonted oberg investigates
Copyright © 2020 KTRK-TV. All Rights Reserved.
TED OBERG INVESTIGATES