Debris of the Germanwings passenger jet is scattered on the mountain side near Seyne les Alpes, French Alps, Tuesday, March 24, 2015. (AP Photo/Claude Paris)

AP
PARIS, France -- The co-pilot of the doomed Germanwings jet barricaded himself in the cockpit and "intentionally" sent the plane full speed into a mountain in the French Alps, ignoring the pilot's frantic pounding on the door and the screams of terror from passengers, a prosecutor said Thursday.

Co-pilot Andreas Lubitz's "intention (was) to destroy this plane," Marseille prosecutor Brice Robin said, laying out the horrifying conclusions reached by French aviation investigators after listening to the last minutes of Tuesday's Flight 9525.

The Airbus A320 was flying from Barcelona to Duesseldorf when it began to descend from cruising altitude of 38,000 feet after losing radio contact with air traffic controllers. All 150 on board died when the plane slammed into the mountain.

Robin said the pilot, who has not been identified, left the cockpit, presumably to go to the lavatory, and then was unable to regain access. In the meantime, Lubitz, a 28-year-old German, manually set the plane on the descent that drove it into the mountain.

Robin said the commander of the plane knocked several times "without response." He said the door could only be blocked manually.

"The most plausible, the most probably, is that the co-pilot voluntarily refused to open the door of the cockpit for the captain and pressed the button for the descent," Robin said.

He said the co-pilot's responses, initially courteous in the first part of the trip, became "curt" when the captain began the mid-flight briefing on the planned landing.

The information was pulled from the black box cockpit voice recorder, but Robin said the co-pilot said nothing from the moment the commanding pilot left.

"It was absolute silence in the cockpit," he said.

During the final minutes of the flight's descent, pounding could be heard on the cockpit door as plane alarms sounded but the co-pilot's breathing was normal the whole time, Robin said.

"It's obvious this co-pilot took advantage of the commander's absence. Could he have known he would leave? It is too early to say," he said.

He said Lubitz had never been flagged as a terrorist and would not give details on his religion or ethnic background. German authorities were taking charge of the investigation into the co-pilot.

Robin said just before the plane hit the mountain, the sounds of passengers screaming could be heard on the audio.

"I think the victims realized just at the last moment," he said.

The A320 is designed with safeguards to allow emergency entry if a pilot inside is unresponsive, but the override code known to the crew does not go into effect - and indeed goes into a lockdown - if the person inside the cockpit specifically denies entry, according to an Airbus training video and a pilot who has six years of experience with the jets.

Airlines in Europe are not required to have two people in the cockpit at all times, unlike the standard U.S. operating procedure after the 9/11 attacks changed to require a flight attendant to take the spot of a briefly departing pilot.

In the German town of Montabaur, acquaintances told The Associated Press that Lubitz appeared normal and happy when they saw him last fall as he renewed his glider pilot's license.

"He was happy he had the job with Germanwings and he was doing well," said a member of the glider club, Peter Ruecker, who watched Lubitz learn to fly. "He gave off a good feeling."

News of how investigators thought the plane crashed shocked the families, the airlines and everyone who heard the chilling, blow-by-blow description from the prosecutor. Lufthansa CEO Carsten Spohr said the airline was already "appalled" by what happened.

"I could not have imagined that becoming even worse," Spohr said in Cologne. "We choose our cockpit staff very, very carefully."

The families of victims were briefed about the conclusions just ahead of the announcement.

"The victims deserve explanations from the prosecutor," Robin said. "(But) they have having a hard time believing it."

Robin said the second black box still had not been found but remains of victims and DNA identification have begun, he said.

Lubitz had obtained his glider pilot's license as a teenager, and was accepted as a Lufthansa pilot trainee after finishing a tough German college preparatory school, Ruecker said. He described Lubitz as a "rather quiet" but friendly young man.

Lubitz' recently deleted Facebook page appeared to show a smiling man in a dark brown jacket posing in front of the Golden Gate Bridge in California. The page was wiped sometime in the past two days.

Lufthansa said Lubitz joined Germanwings in September 2013, directly out of flight school, and had flown 630 hours. The captain had more than 6,000 hours of flying time and been a Germanwings pilot since May 2014, having previously flown for Lufthansa and Condor.

The circumstances of the crash are likely to raise questions anew about the possibility of suicidal pilots.

In the 1999 crash of an EgyptAir jet off Nantucket that killed all 217 people on board, U.S. investigators found the co-pilot intentionally caused the plane to go down despite the pilot's efforts to regain control. Egyptian officials rejected the findings, saying the crash may have been caused by a mechanical failure. 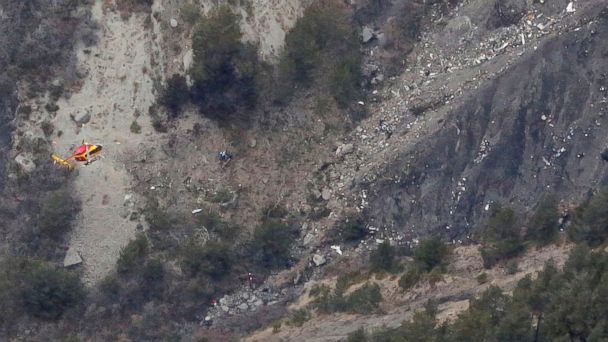