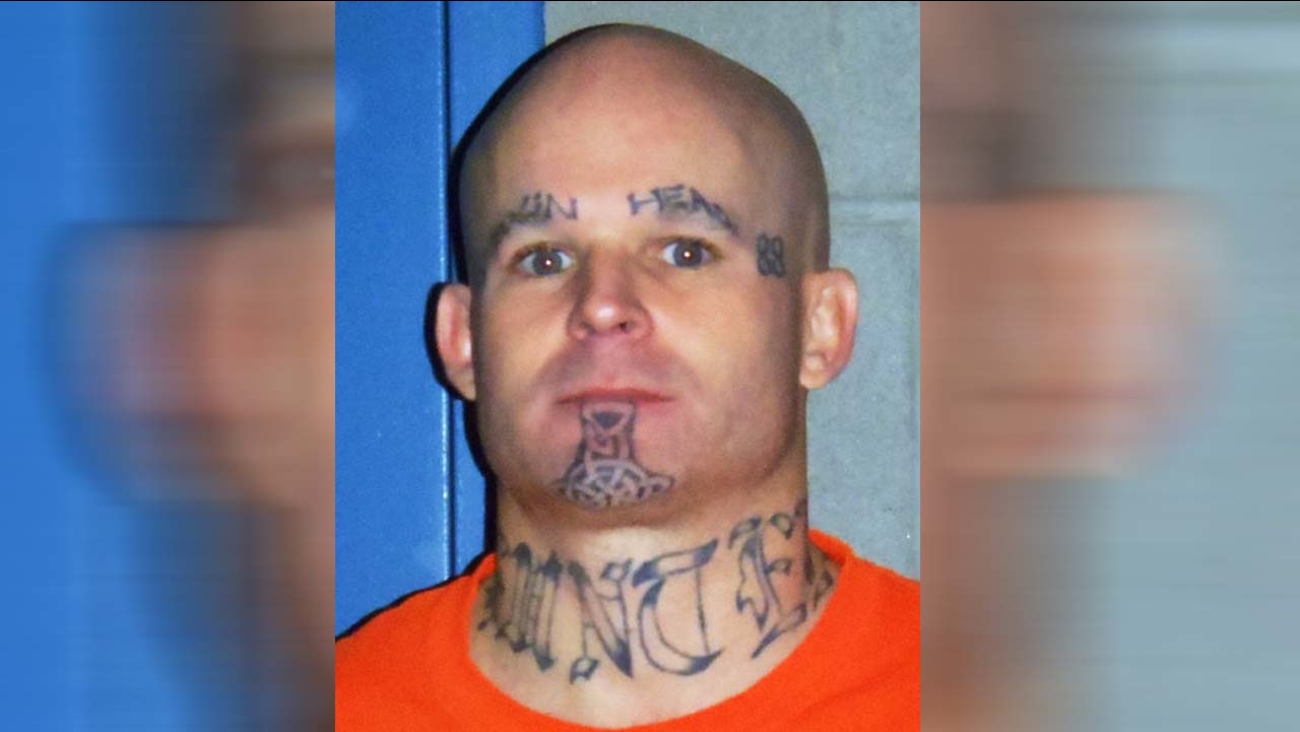 MESA, AZ -- Authorities were trying to find out what triggered an ex-convict to shoot and kill one person and wound five others in a rampage in a Phoenix suburb where officers flooded the streets in an intense, hourslong hunt for the gunman.

Mesa police said the string of crimes included a motel shooting, a carjacking and a home invasion and ended with the suspect's arrest Wednesday at an apartment.

He was taken into custody after officers spotted him on an apartment balcony and hit him with a stun gun. Numerous officers led the handcuffed man to a truck parked outside the apartment complex.

Police later identified the man as Ryan Giroux, 41, who has served three stints in state prison since 1994. A mug shot from the Arizona Department of Corrections shows him with several face and neck tattoos, including the word "skinhead" where his eyebrows normally would be.

Police said the motive for the initial shooting at the motel was unclear but the other three shootings appeared motivated by robbery and the suspect's attempt to flee.

The shootings started with an argument inside a motel room that spilled outside, leaving one man dead and two women wounded, Mesa police Detective Esteban Flores said.

The gunman then shot a man working at a nearby restaurant. The adult student at the nearby East Valley Institute of Technology was able to run across the street to emergency responders already at the motel, Flores said. The school said in a statement that the victim was one of seven students and an instructor working at Bistro 13 restaurant. The student was treated at a hospital and released.

Vinny Carbone, who owns an auto body shop near the motel and restaurant, said he was getting ready to open when he heard a man yell "Help, help" from Bistro 13 across the street. He turned and saw a woman outside the motel with what looked like a bullet hole in her side.

"She was in a chair but she was holding onto another chair, shaking, trying to keep her balance," Carbone said. "Another guy, he had blood on the back of his shirt."

The gunman got away from the restaurant by carjacking the school instructor's car.

Police say the man then went to an apartment complex about 2 miles away, where he went into an apartment and shot a man. That victim will survive, police said.

A police officer found another man in a neighboring apartment building with multiple gunshot wounds, and Flores said that victim was hospitalized in critical condition.

The shootings set off an intense hunt for the gunman. Mesa police searched the trunks of cars, interviewed witnesses and brought in SWAT and canine units from other agencies. Flores warned people in the neighborhood to remain indoors.

Alex Martin of Mesa saw the chaos that ensued.

"I heard several cop cars and ambulances and fire trucks roll up past me. I get here and there's easily 20, 30 police units just swarming the roads," Martin said.

Giroux served prison terms totaling more than eight years for burglary, theft, attempted aggravated assault and a marijuana violation, according to an Arizona Department of Corrections profile of Giroux.