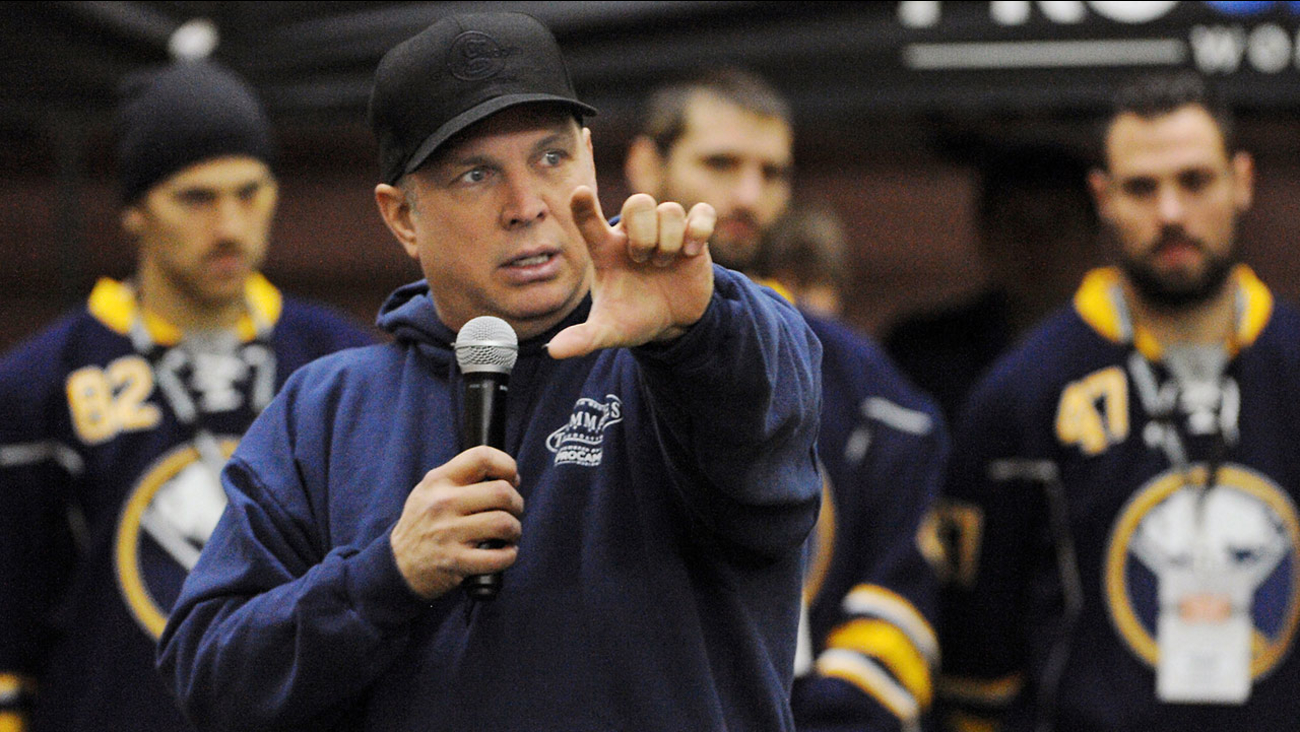 Forget the friends Garth Brooks might have in low places. The country music star has some high-profile buddies he can count on as well.

The Pro Football Hall of Famers were among numerous current and former athletes to join Brooks in holding a football camp for more than 100 children at the Buffalo Bills' practice facility Sunday.

Brooks' Teammates For Kids foundation holds a camp at each concert stop. He was in Buffalo performing six shows in four nights as part of Brooks' first major tour in more than 15 years.

It was an extra special moment for Thomas, who played at Oklahoma State in the 1980s at the same time Brooks attended the school while earning an advertising degree and launching a music career that would make him one of the world's top-selling artists.

"To me, he's the most famous Oklahoma State Cowboy ever," Thomas said, referring to Brooks.

Brooks was within earshot of Thomas, and exclaimed with a big grin: "I love you, man,"

New Bills coach Rex Ryan took part, along with several of his players. The Buffalo Sabres were represented. Also on hand was Buffalo native and New England Patriots tight end Rob Gronkowski, along with members of his family.

Brooks and company took a hands-on approaching during the two-plus-hour camp. The kids took part in an assortment of drills and were also counseled on the importance of being a good teammate.

"It's great to do things individually and to accomplish things as an individual," Ryan said, in his message to the kids. "But the best feeling you'll have is when you win together, and when you do things and you're successful as a team."

Brooks established the foundation in 1999, and has drawn in athletes representing a wide variety of professional sports including baseball, bull riding, golf and soccer.

Athletes are asked to pledge donations based on individual statistics - touchdowns, goals and runs-scored, for example. The foundation then triples each amount to fund health and educational programs for underprivileged children.

"It's a pleasure to get to not only come out here and be a part of this, but to be associated with a guy like Garth," Bills running back Fred Jackson said. "We love being out here giving our tutelage to the kids, and letting them know they mean a lot to us as well."

Brooks was particularly pleased to have Kelly on hand, in part because the former star quarterback is recovering from two separate bouts of cancer over the past two years.

The 53-year-old Brooks, known for his frenetic onstage presence, was a dynamo in the midst of a hectic schedule that featured him playing two shows on both Friday and Saturday.

Aside from hosting the camp, Brooks and his band and crew got an opportunity to play a pick-up hockey game at the Sabres downtown HarborCenter facility. They also planned to sample some of Buffalo's famed chicken wings before leaving town for their next stop in Denver, where Brooks will perform nine shows in seven days, starting March 18.

"The only thing that will kind of go down during the six shows is the voice. It just doesn't hold up," Brooks said, earlier in the week. "They keep telling me, 'Take it easy.' I can't. It's like I'm a kid at a toy store."