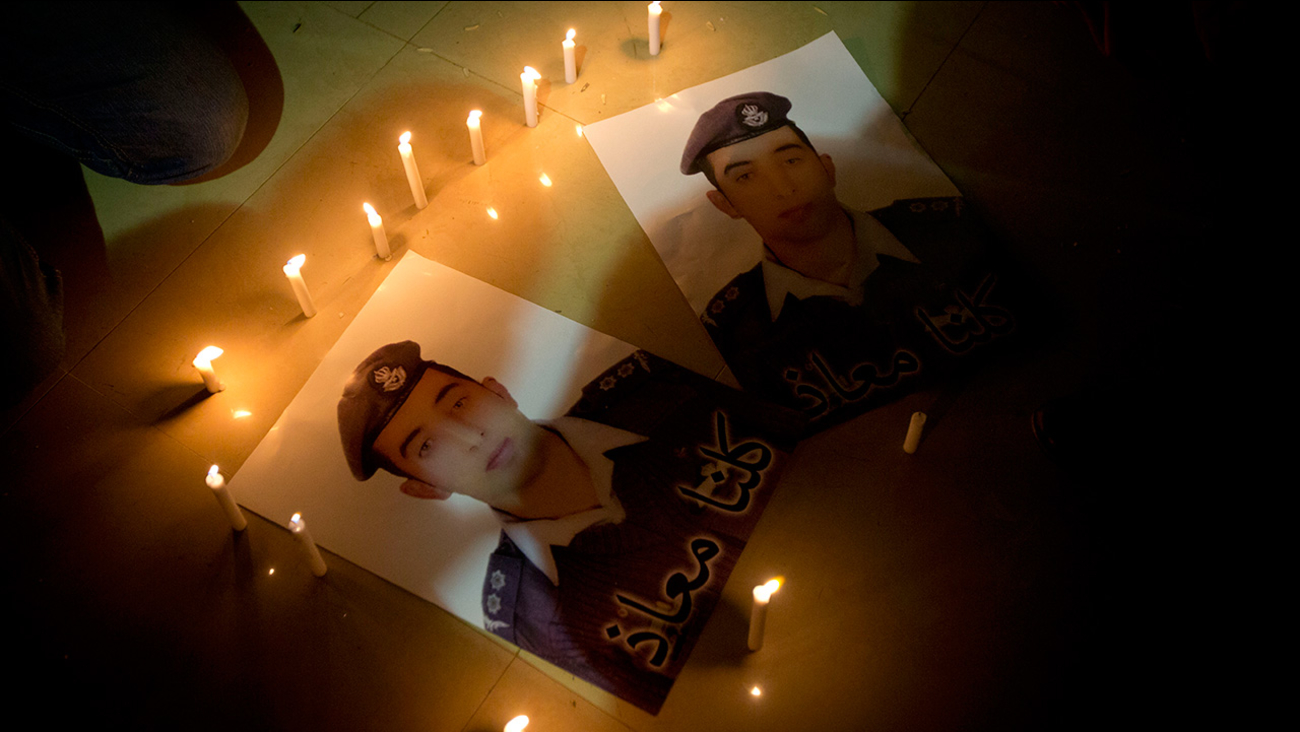 Members of Al-Kaseasbeh, the tribe of Jordanian pilot, Lt. Muath al-Kaseasbeh, remember him in his home town of Karak, Jordan (AP Photo/Nasser Nasser)

The gruesome death of 26-year-old Lt. Muath Al-Kaseasbeh, captured while participating in airstrikes by a U.S.-led coalition targeting the militants, sparked outrage across the Middle East and anti-Islamic State group demonstrations in Jordan.

The pilot's father called on the government to avenge his son, and officials threatened a tough response, as King Abdullah II, a staunch Western ally, rushed back to his kingdom from Washington.

The executions took place at Swaqa prison about 50 miles (80 kilometers) south of the Jordan's capital, Amman. At sunrise, two ambulances carrying the bodies of al-Rishawi and al-Karbouly drove away from the prison with security escorts. Authorities said they'd be buried later in Jordan.

Al-Rishawi had been sentenced to death after her 2005 role in a triple hotel bombing that killed 60 people in Amman orchestrated by al-Qaida in Iraq, the predecessor of the Islamic State group. Al-Karbouly was sent to death row in 2008 for plotting terror attacks on Jordanians in Iraq.

The militants purportedly had demanded Jordan release al-Rishawi in exchange for the pilot. Over the past week, Jordan had offered to trade her, but froze any swap after failing to receive any proof that the pilot was still alive.

The Jordanian military said, without elaborating, that the pilot was killed Jan. 3, suggesting officials knew any attempt to trade would be in vain.

Al-Kaseasbeh had fallen into the hands of the militants when his F-16 crashed near Raqqa. He was the first airman participating in the U.S.-led bombing raids against militant positions in Syria and Iraq to be captured.

In the 20-minute video purportedly showing his killing, he displayed signs of having been beaten, including a black eye. Toward the end of the clip, he is shown wearing an orange jumpsuit. He stands in an outdoor cage as a masked militant ignites a line of fuel leading to it.

The video, which threatened other purported Jordanian pilots by name, was released on militant websites and bore the logo of the extremist group's al-Furqan media service. The clip featured the slick production and graphics used in previous Islamic State group videos. The video could not immediately be confirmed independently by The Associated Press.

Jordan's military quickly confirmed al-Kaseasbeh had been killed. "Our punishment and revenge will be as huge as the loss of the Jordanians," army spokesman Mamdouh al-Ameri said.

Jordan faces increasing threats from the militants. Jordan borders areas of Islamic State group's self-declared caliphate. There also have been signs of greater support for the group's militant ideas among Jordan's young and poor.

The pilot's father, Safi Yousef al-Kaseasbeh, was attending a tribal meeting in Amman when news of the video surfaced, and he was seen being led from the session. Other men were seen outside, overcome with emotion.

After word spread that the pilot had been killed, dozens of people chanting slogans against the Islamic State group marched toward the royal palace to express their anger. Waving a Jordanian flag, they chanted, "Damn you, Daesh!" - using the Arabic acronym of the group - and "We will avenge, we will avenge our son's blood."

Al-Kaseasbeh is from a tribal area in southern Jordan's Karak district. The tribes are considered a mainstay of support for the monarchy, but the pilot's capture has strained that relationship.

During the weeks of uncertainty about the pilot's fate, members of his family had criticized the government's handling of the crisis and Jordan's participation in the anti-Islamic State group alliance.

However, the tone has changed since the announcement of his death, with family members speaking out against the militants and demanding revenge.

Jordanians expressed shock Wednesday over the brutality of the Islamic State group.

"There is no religion accepts such act," Amman resident Hassan Abu Ali said. "Islam is a religion of tolerance. (The Islamic State group) have nothing to do with Islam. This is criminal act."

Across the Middle East, religious and political leaders offered angry denunciations and called for blood as some on television wept when talking about the pilot.

The head of Sunni Islam's most respected seat of learning, Egypt's Al-Azhar Mosque, even said that Islamic State militants deserved the Quran-prescribed punishment of death, crucifixion or the chopping off of their arms.

"Islam prohibits the taking of an innocent life," Ahmed al-Tayeb, the mosque's grand sheik, said in a statement.

The Islamic State group has released a series of gruesome videos showing the beheading of captives, including two American journalists, an American aid worker and two British aid workers. Tuesday's was the first to show a captive being burned alive.

The latest video was released three days after another video showed the purported beheading of a Japanese journalist, Kenji Goto, who was captured by the Islamic State group in October.

The militants had linked the fates of the pilot and the journalist. A second Japanese hostage was apparently killed earlier last month.

David L. Phillips, a former State Department adviser on the Middle East, said he believes the pilot's killing could backfire, antagonizing Sunnis against the extremists, including Sunni tribes in Iraq. He also said the extremist group's recent military setbacks may have fueled the killings.

"They need to compensate for that with increasingly gruesome killings of prisoners," said Phillips, director of the Program on Peace-building and Human Rights at Columbia University.

In Washington, King Abdullah II and President Barack Obama vowed in a hastily arranged White House meeting Tuesday not to let up in the fight against the Islamic State group. Abdullah has portrayed the campaign against the extremists as a battle over values. In a speech later aired on Jordanian state television, he urged his countrymen to unite.

"It's the duty of all of us to stand united and show the real values of Jordanians in the face of these hardships," Abdullah said.

U.S. Rep. Duncan Hunter Jr., a California Republican, said after a meeting with congressional lawmakers and King Abdullah that the Jordanian monarch had been visibly angry and promised swift and certain retaliation against Islamic State group militants.

"They're starting more sorties tomorrow than they've ever had. They're starting tomorrow," Hunter told the Washington Examiner in an interview published online Tuesday night.

Hunter added the king also said: "The only problem we're going to have is running out of fuel and bullets."