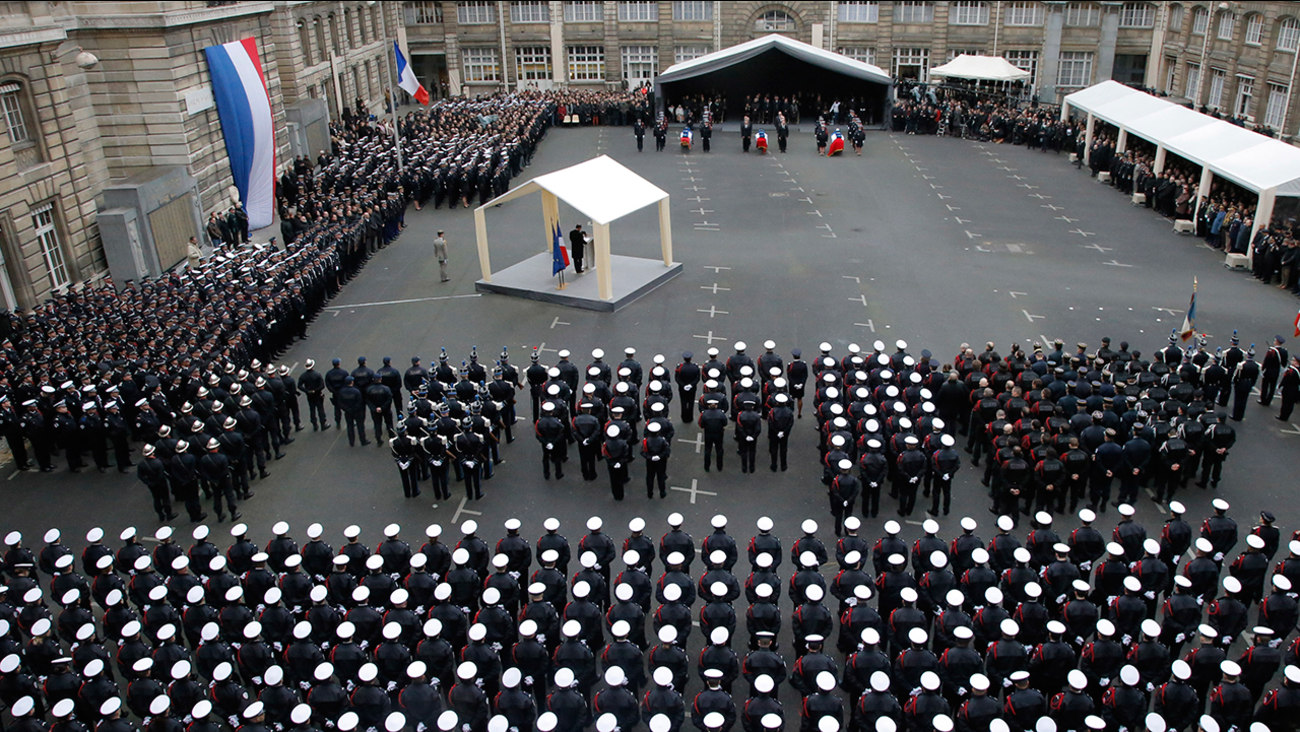 French President Francois Hollande delivers his speech, at left, during a ceremony to pay tribute to the three police officers killed in the attacks, in Paris, France, Jan. 13 (AP Photo/Francois Mori, pool)

PARIS, France -- France's prime minister announced he would seek tighter surveillance of convicted extremists Tuesday and reports emerged that the weapons used by a terror cell to kill 17 people around Paris came from outside the country.

In a rousing, indignant speech, Prime Minister Manuel Valls said "serious and very high risks remain" and warned the French not to let down their guard. He called for new surveillance of imprisoned radicals and told the interior minister to come up with new security proposals shortly.

Christophe Crepin, a French police union representative, said several people were being sought in relation to the "substantial" financing of the three gunmen. He said the weapons stockpile came from abroad and the amount spent plus the logistics of the attacks indicated an organized network.

French authorities were working to trace the source of the weapons funding while in Bulgaria, a prosecutor announced that a man already in custody had ties to one of the brothers who carried out the Charlie Hebdo newspaper massacre.

French police say as many as six members of the terrorist cell that carried out the Paris attacks may still be at large, including a man seen driving a car registered to the widow of one of the gunmen. The country has deployed 10,000 troops to protect sensitive sites, including Jewish schools and synagogues, mosques and travel hubs.

Earlier in the day, in ceremonies thousands of miles apart, France and Israel paid tribute to the victims of the terror attacks.

At police headquarters in Paris, French President Francois Hollande paid tribute to the three police officers killed in the attacks, placing Legion of Honor medals on their caskets.

Hollande vowed that France will be "merciless in the face of anti-Semitic, anti-Muslim acts, and unrelenting against those who defend and carry out terrorism, notably the jihadists who go to Iraq and Syria."

As Chopin's funeral march played in central Paris and the caskets draped in French flags were led from the building, a procession began in Jerusalem for the four Jewish victims of the attack Friday on a kosher supermarket in Paris.

"Returning to your ancestral home need not be due to distress, out of desperation, amidst destruction, or in the throes of terror and fear," said Israeli President Reuven Rivlin.

Defying the bloodshed and terror of last week, a caricature of the Prophet Muhammad is to appear Wednesday on the cover of the satirical newspaper Charlie Hebdo, weeping and holding a placard with the words "I am Charlie." Above him is emblazoned: "All is forgiven" - a phrase one writer said meant to show that the survivors of the attacks forgave the gunmen.

"I think that those who have been killed, if they were here, they would have been able to have a coffee today with the terrorists and just talk to them, ask them why they have done this," columnist Zineb El Rhazoui told the BBC.

Two masked gunmen opened the onslaught in Paris with a Jan. 7 attack on the paper, singling out its editor and his police bodyguard for the first shots before killing 12 people in all. Ahmed Merabet, a French Muslim policeman, was one of the victims, killed as he lay wounded on the ground as the gunmen - brothers Said and Cherif Kouachi - made their escape.

Charlie Hebdo, which lampoons religion indiscriminately, had received threats after depicting Muhammed before, and its offices were firebombed in 2011.