Student in custody after allegedly shooting parents on campus: Police 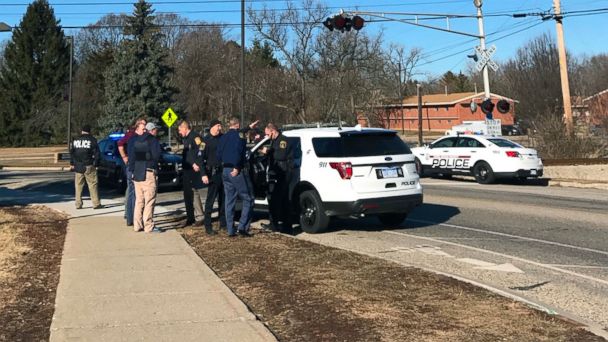 A 19-year-old Central Michigan University student officials accused of fatally shooting his mother and father on campus was taken into custody just after midnight Saturday after a nearly day-long manhunt.

More than 100 police officers spent the afternoon and evening searching the Mount Pleasant area for James Eric Davis, who authorities described as armed and dangerous, after he allegedly shot his mother and father, an Illinois police officer.

CMU said James Eric Davis was taken into custody after a person reported to police they spotted the suspect on a train passing through the north end of campus shortly after midnight. He was arrested without incident.

Bellwood Police Officer James Davis Sr. and his wife, Diva Jennen Davis, were the victims in the shooting, according to the university.

No students, faculty or staff were injured in the incident at Campbell Hall, a dorm building, according to the school.

University police said the suspect was caught on camera fleeing the area.

A police department had contact with the suspect Thursday night, and at some point in the night, he was taken to a hospital, university police said.

Debra Williams, the mother of James Eric Davis' roommate, told ABC affiliate Toledo, Ohio, station WTVG that she was overcome with panic after her son texted her Friday morning, saying that he thought his "roommate just shot his mom."

The campus was on lockdown Friday morning and students posted on social media images of their barricaded dorm room doors and video of the school's alert message. All planned campus events have been canceled until further notice, as well as scheduled Saturday classes.

Bellwood Mayor Andre Harvey told reporters Friday evening that he grew up with James Davis Sr., who had been a family friend and a part-time police officer with the department for more than 20 years.

While offering his condolences to the couple's loved ones, Harvey described James Davis Sr. as an "outstanding officer" who was "loved by all here at the Village of Bellwood" and his wife, Diva Jennen Davis, as a "wonderful woman."

"James Davis touched everybody's lives in the Village of Bellwood in a positive manner," Harvey said.

The parents have at least two other children, an older son and a younger daughter, Harvey said.

Michigan Gov. Rick Snyder said, "The priority right now is the safety of those still on campus."