Texans fall to Patriots 34-16 in AFC divisional round 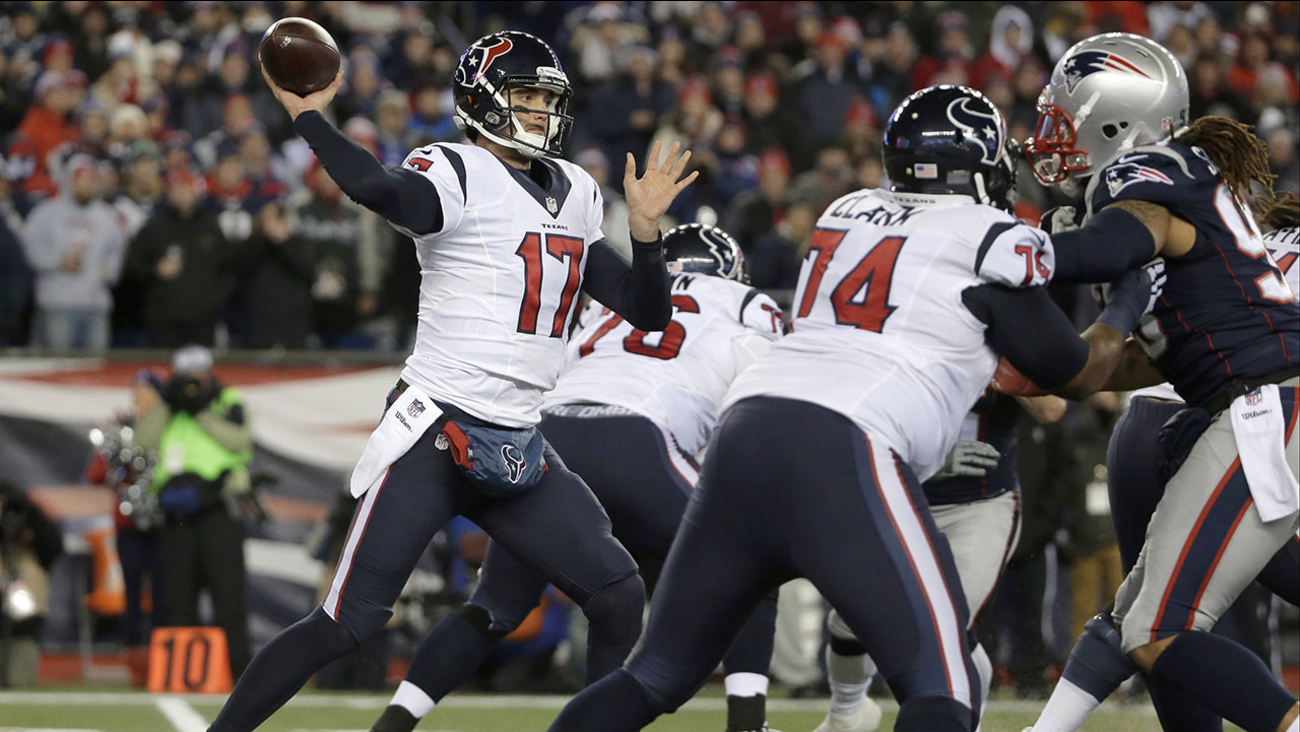 FOXBOROUGH, MA -- The Texans fell to the New England Patriots 34-16.

The New England Patriots are headed back to a familiar spot: the AFC championship game.

Dion Lewis had a 13-yard touchdown reception , a 98-yard kickoff return for a score, and a late 1-yard touchdown to help the Patriots hold off the Houston Texans 34-16 on Saturday night and advance to an NFL-record sixth straight conference title game.

Lewis became the fifth Patriots player to score three touchdowns in a playoff game. He's also the first player in the Super Bowl era to score on a rush, a catch and a kick return in a postseason game.

But the Texans (10-8) couldn't find enough traction on offense to take full advantage of the Patriots' mistakes, settling for field goals on both of Brady's picks.

New England led just 17-13 at the half, but pushed its lead to 24-13 early in the third quarter on a 19-yard touchdown pass from Brady to James White.

Houston's Brock Osweiler was intercepted three times after that, and the Texans managed only a field goal the rest of game.

It was the first breakout game of the season for Lewis, who spent the first eight games of the season on injured reserve recovering from offseason surgery on his left knee.

Brady finished 18 of 38 for 287 yards and two touchdowns and was showered with chants of "MVP! MVP!" and "Brady! Brady!" late in the game. Julian Edelman was Brady's most dependable target, catching eight passes for 137 yards.

When New England did have the ball in the first half, it gave Houston a steady diet of Lewis early with LeGarrette Blount coming off an illness that limited him during practice this week.

Without Blount to contend with, the Texans applied pressure to Brady.

A.J. Bouye intercepted a slightly overthrown ball by Brady late in the first quarter on a pass that bounced out of the hands of receiver Michael Floyd. That led to a 27-yard field goal that cut New England's lead to 14-6.

On the ensuing kickoff, Lewis coughed up the ball on a hit from Akeem Dent. Eddie Pleasant fell on it at the Patriots 12, and two plays later, Brock Osweiler hit C.J. Fiedorowicz from 8 yards out to cut the deficit to 14-13.

Brady only threw two interceptions during the regular season. With his 28 touchdown passes, that was the lowest touchdown to interception ratio in NFL history.

CLOWN TIME IS OVER

Jadeveon Clowney was in Brady's face all game, flattening him in the first half with a legal hit and bringing him down a couple of times in the second on plays that were a little more questionable.

In the third quarter, Brady was chased out of the pocket before heaving the ball downfield. Clowney dragged him to the turf, and Brady came up kicking. The Patriots quarterback made his case to the referee, but no penalty was called.

Early in the fourth, though Clowney was called for roughing the passer for Brady after he got rid of the ball and while he was in the clutches of defensive end Christian Covington.

He made an extra point in the first quarter to pass Rice and move into third place on the league's career list. It was Gostkowski's 133rd postseason point, breaking a tie with the San Francisco 49ers receiver.

Next up are kickers Gary Anderson, David Akers and all-time leader Adam Vinatieri, who had half of his 234 career postseason points with New England before moving on to the Indianapolis Colts.

Texans: RB Tyler Ervin left in the second quarter with a concussion. Defensive end Joel Heath exited in the fourth quarter with a knee injury and did not return.

Patriots: WR Chris Hogan left in the third quarter with a thigh injury.