Election Day ballot selfies: Where they are allowed and not allowed 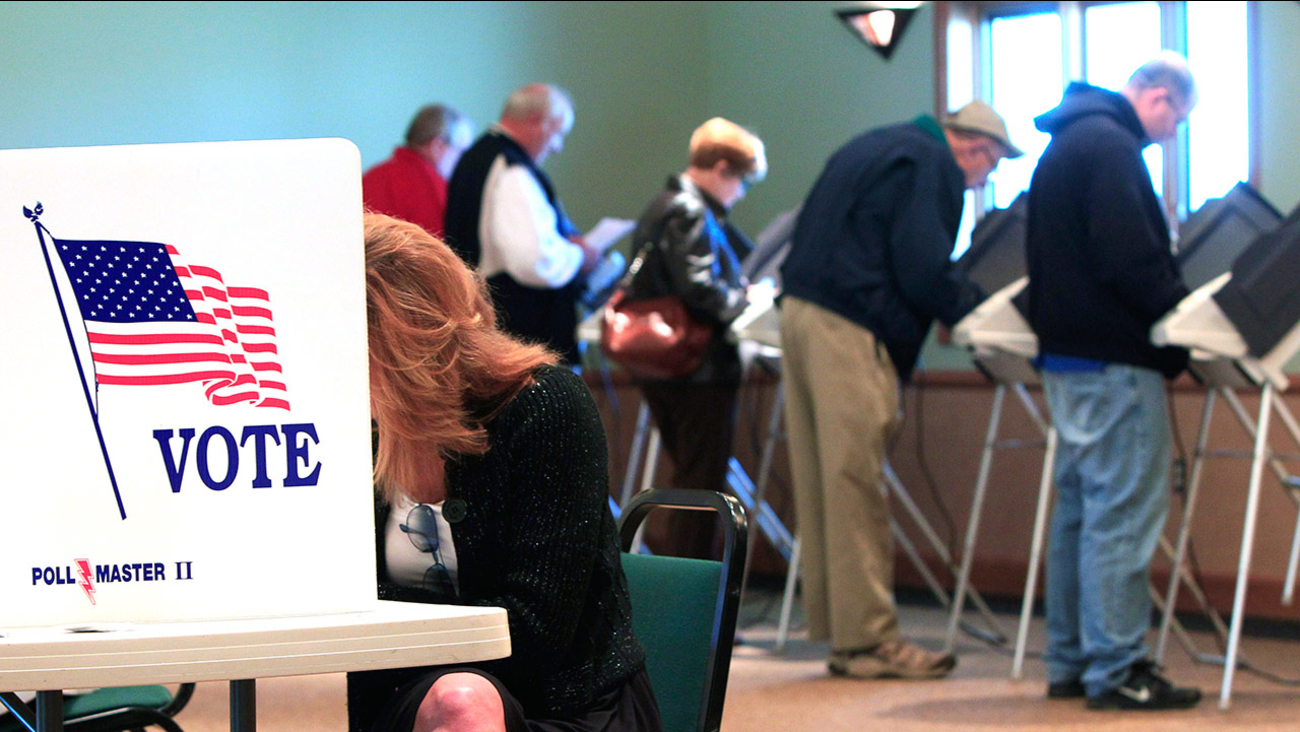 Secrecy in the voting booth has become a thing of the past for those ready to share their views and daily lives on social media, but laws nationwide are mixed on whether voters are allowed to take pictures of themselves voting and their ballots.

RELATED: What you need to know for Early Voting in Harris County, Texas

How states handle the selfie question:

STATES WHERE BALLOT SELFIES ARE ALLOWED

CONNECTICUT: No law bans ballot selfies, according to Patrick Gallahue, a spokesman for Secretary of State Denise Merrill. But election moderators have discretion to prohibit activity "that threatens the orderly process of voting or the privacy of another voter's ballot."

DISTRICT OF COLUMBIA: There's no ban. Election officials discourage people from taking pictures but won't do anything to stop them, said Tamara Robinson, a spokeswoman for the D.C. Board of Elections.

HAWAII: A law passed this year allows voters to share a digital image of one's own marked ballot.

IDAHO: There's no law banning them, the secretary of state's office said.

LOUISIANA: Secretary of State Tom Schedler says ballot selfies are allowed in the state, though he's not a fan of them.

MAINE: The secretary of state discourages ballot selfies because there's a ban on making unauthorized ballot copies, but there's no law against voters posting photos of their marked ballot.

MINNESOTA: Allowed as long as they're not shown to fellow voters at the polling place or capture another person in the photo.

MONTANA: Law does not specifically prohibit the use of cameras at polling places, but election administrators and judges have broad authority to limit disruptive activity, according to Emily Dean, spokeswoman for the secretary of state. Sharing photos of absentee ballots is also not banned.

NEBRASKA: Gov. Pete Ricketts signed a bill in April that allows someone to show their marked ballots to others without risking a $100 fine.

NEW HAMPSHIRE: The 1st Circuit Court of Appeals in Boston last month upheld a decision that a ban was unconstitutional, saying it suppresses a large swath of political speech and there was no evidence to support the state's concerns.

OREGON: All voting is done through mail-in ballots, which voters are free to photograph. A state law prohibiting showing a marked ballot to another person was repealed in 2014, according to Molly Woon, a spokeswoman for Secretary of State Jeanne Atkins.

RHODE ISLAND: The Board of Elections adopted new rules in time for November's election that allow for selfie-taking inside polling places. The updated regulations allow voters to take photos as long as they don't show another person's ballot.

UTAH: Gov. Gary Herbert signed a bill last year that makes it legal for people to snap pictures of themselves with their ballots. The law makes it a misdemeanor to photograph someone else's ballot.

VERMONT: No rules regarding photos in polling places. Clerks are encouraged to adopt specific rules for their polling places to maintain order, according to Jim Condos, a spokesman for the secretary of state.

VIRGINIA: Attorney General Mark Herring issued a formal opinion last month that says ballot selfies are legal in Virginia. Nothing in Virginia law prohibits voters from taking pictures of themselves, fellow voters or their ballot within the polling place, he said.

WASHINGTON STATE: It's not against the law in Washington, but a spokesman for Washington state Secretary of State Kim Wyman said the office doesn't recommend it.

WYOMING: No laws against ballot selfies. Law does allow judges of elections to "preserve order at the polls by any necessary and suitable means."

STATES WHERE BALLOT SELFIES ARE ILLEGAL

ALABAMA: Not allowed because voters have "a right to cast a ballot in secrecy and in private," said a spokesman for Secretary of State John Merrill.

ALASKA: A state law bans voters from showing their marked ballots, but Division of Elections Director Josie Bahnke says there is no practical way to enforce it.

COLORADO: Ballot selfies or any public dissemination of a marked ballot are considered a misdemeanor. A 2016 bill to repeal the ban failed.

FLORIDA: Photographs are not allowed in polling places or of mailed ballots.

GEORGIA: Law prevents photos of ballots or the screens of electronic voting machines.

ILLINOIS: Banned by a law that considers "knowingly" marking your ballot so that another person can see it is a felony that carries of prison sentence of one to three years.

MASSACHUSETTS: Taking a photo of a completed ballot in a polling location is banned in Massachusetts. But the state's top election official, Secretary William Galvin, says there's little the state can do to prevent it. Photos of mailed ballots are also banned.

MICHIGAN: Michigan bans photographs of ballots, but a resident is challenging the law as unconstitutional.

MISSISSIPPI: Photos showing how someone marked their ballot after voting are prohibited.

NEVADA: Photos inside polling places are not allowed, except by the media. Photos of mailed ballots are also banned.

NEW JERSEY: Law prohibits voters from showing their ballot to others. A pending legislative measure would allow voters to take photos of their own ballots while in the voting booth and share it on social media.

NEW MEXICO: Law prohibits voters from showing their marked paper ballot "to any person in such a way as to reveal its contents."

NEW YORK: Photos showing a completed ballot or indicating how a person cast their vote are not allowed.

NORTH CAROLINA: Photographing or otherwise recording a voted official ballot is not allowed.

SOUTH CAROLINA: Law bars voters from allowing their ballots to be seen. A 2012 state attorney general's opinion says that makes it illegal to reproduce a ballot by cellphone, video camera or iPad.

SOUTH DAKOTA: Secretary of State Shantel Krebs says ballot selfies are not allowed because they can be considered influencing a vote or forcing someone to show proof of voting.

STATES WHERE THE LEGAL STATUS IS MIXED OR UNCLEAR

ARIZONA: Bars photography within 75 feet of polling places. But the Legislature changed the law that barred showing photos of completed ballots in 2015 to allow posting of early ballots on social media.

ARKANSAS: Nothing in state law prohibits taking photos while in a polling place as long as it's not disruptive or being used for electioneering purposes, but state law on sharing voter choices is unclear.

CALIFORNIA: Gov. Jerry Brown signed a bill last month that repeals a 125-year-old law barring voters from showing people their marked ballots. The change will take effect nearly two months after the presidential election, but legislative analysts have found no occasion of the ban being enforced. The author of the bill, in fact, has been sharing constituents' photos of marked ballots on social media since the law passed.

DELAWARE: Has a policy against cellphones in voting booths, but elections Commissioner Elaine Manlove said: "I don't know that we can control what happens behind the curtain."

IOWA: Law prohibits the use of cameras, cellphones or other electronic devices in voting booths, so Secretary of State Paul Pate has asked voters not to take selfies with ballots. Photos of absentee ballots are OK.

MARYLAND: Bans electronic devices in a polling place except for the media. And even media members aren't allowed to photograph a ballot that shows how someone is voting. But photos of mailed ballots are OK.

MISSOURI: Law prohibits voters from allowing others to see their ballots if the intent is to show how they voted. Secretary of state spokeswoman Stephanie Fleming described ballot selfies as a "gray area" and advises voters to check with local election authorities.

OHIO: Has a longstanding prohibition against voters letting their ballot be seen with the "apparent intention" of letting it be known how they are about to vote. The state elections chief has advised local election boards to consult their own attorneys about how to apply the law.

OKLAHOMA: Officials recommend against it, noting that state law dating back about 40 years suggests it is illegal but outlines no penalties.

PENNSYLVANIA: Law prohibits someone from revealing their ballot "letting it be known how" they're "about to vote." But officials recently released guidance on electronic items in polling places that noted the recent court cases that "found a First Amendment right to take 'ballot selfies.'"

TEXAS: Bars photography within 100 feet of polling stations, so selfies are not allowed. Photos of mail-in ballots are OK.