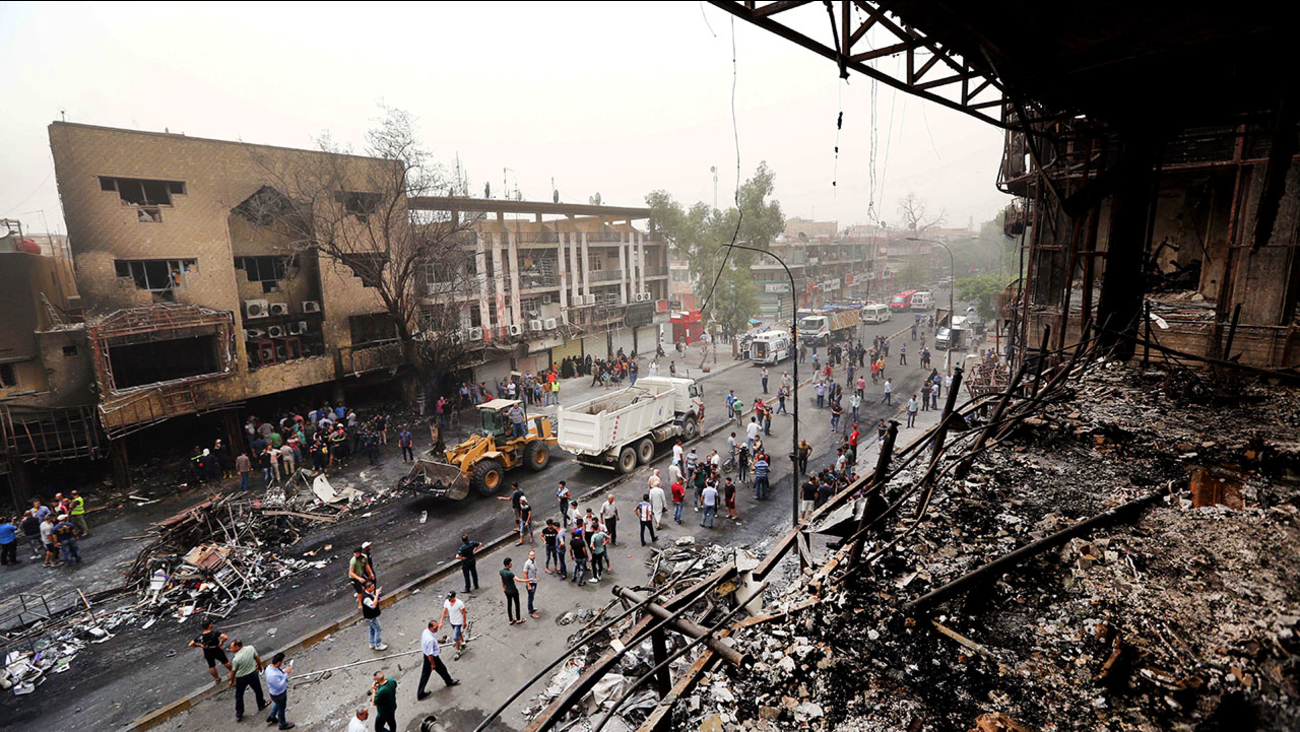 BAGHDAD -- A suicide truck bomb in downtown Baghdad killed 115 people and wounded nearly 200 others who were out shopping and celebrating early Sunday ahead of the holiday marking the end of Ramadan, security and medical officials said.

The attack, claimed by the Islamic State group, was the deadliest in months in the Iraqi capital, and came despite a series of recent gains against the extremists, including the capture of Fallujah, which was believed to have been a source of such attacks.

The bomb went off shortly after midnight in a crowded shopping area in the central Karada district, killing at least 115 people and wounding 187, according to a police official. The dead included at least 15 children, 10 women and six policemen. At least twelve other people were still missing and feared dead.

Karada is a major commercial area lined with clothing and jewelry stores, restaurants and cafes, and was packed with shoppers ahead of Wednesday's Eid al-Fitr holiday marking the end of Ramadan. Most of the victims were inside a multi-story shopping and amusement mall, where dozens burned to death or suffocated, police said.

It was the deadliest attack in Iraq since July 2015 and among the worst single bombings in more than a decade of war and insurgency.

"It was like an earthquake," said Karim Sami, a 35-year-old street vendor. "I wrapped up my goods and was heading home when I saw a fireball with a thunderous bombing," the father of three said.

"I was so scared to go back and started to make phone calls to my friends, but none answered." He said that one of his friends was killed, another was wounded and one was still missing.

As with many previous attacks, IS swiftly claimed responsibility for the bombing in a statement posted online, saying it had targeted Shiite Muslims. The Associated Press could not verify the authenticity of the statement, but it was posted on a militant website commonly used by the extremists.

Firefighters and civilians could be seen carrying the dead away, their bodies wrapped in blankets and sheets. Smoke billowed from the shopping center, which was surrounded by the twisted and burned wreckage of cars and market stalls. A group of women were sitting on the pavement, crying for their loved ones.

Elsewhere in Baghdad, a roadside bomb went off in the mostly Shiite Shaab neighborhood, killing five people and wounding 16, another police officer said. No group claimed responsibility for the attack, but it bore the hallmarks of IS militants.

The Sunni extremists frequently target the country's Shiite majority and Shiite-led security forces, viewing them as apostates deserving of death.

Medical officials confirmed the casualty figures from both attacks. All officials spoke on condition of anonymity because they were not authorized to brief reporters.

The attacks came just a little over a week after Iraqi forces declared Fallujah "fully liberated," marking a major victory against IS. The city, less than an hour's drive from Baghdad, had been the first Iraqi urban center to fall to IS, in January 2014, and was its last major stronghold in the vast, Sunni Anbar province.

On Sunday, the Joint Military Operation Command announced that government forces retook seven villages south of the IS-held city of Mosul as part of a small-scale operation started in March aimed at clearing areas outside the city to cut the supply lines and enable more troops to be deployed ahead of a major operation.

Mosul, Iraq's second-largest city, fell to IS when the militants swept across northern and western Iraq in the summer of 2014. It is the largest city in the group's self-styled caliphate.

The prime minister had received a rare boost after the Fallujah campaign following months of anti-government protests over political gridlock, official corruption and poor public services.

He faced renewed criticism in Karada on Sunday over lax security in the capital, where security forces at checkpoints still use bomb-detecting wands that were shown to be useless years ago.

"We are in a state of war, and these places are targeted. The security can't focus on the war (against IS) and forget Baghdad," Sami, the street vendor, said.

The U.N. envoy for Iraq, Jan Kubis, described the Karada attack as "a cowardly and heinous act of unparalleled proportions" and urged the Iraqi government to redouble its security efforts to protect Iraqis during the Eid al-Fitr celebrations.

IS militants who "have suffered defeats at the battlefront are seeking to avenge their losses by targeting vulnerable civilians," Kubis added.

"These attacks only strengthen our resolve to support Iraqi security forces as they continue to take back territory from ISIL, just as we continue to intensify our efforts to root out ISIL's terrorist network and leaders," National Security Council spokesman Ned Price said in a statement, referring to IS by an alternative acronym.