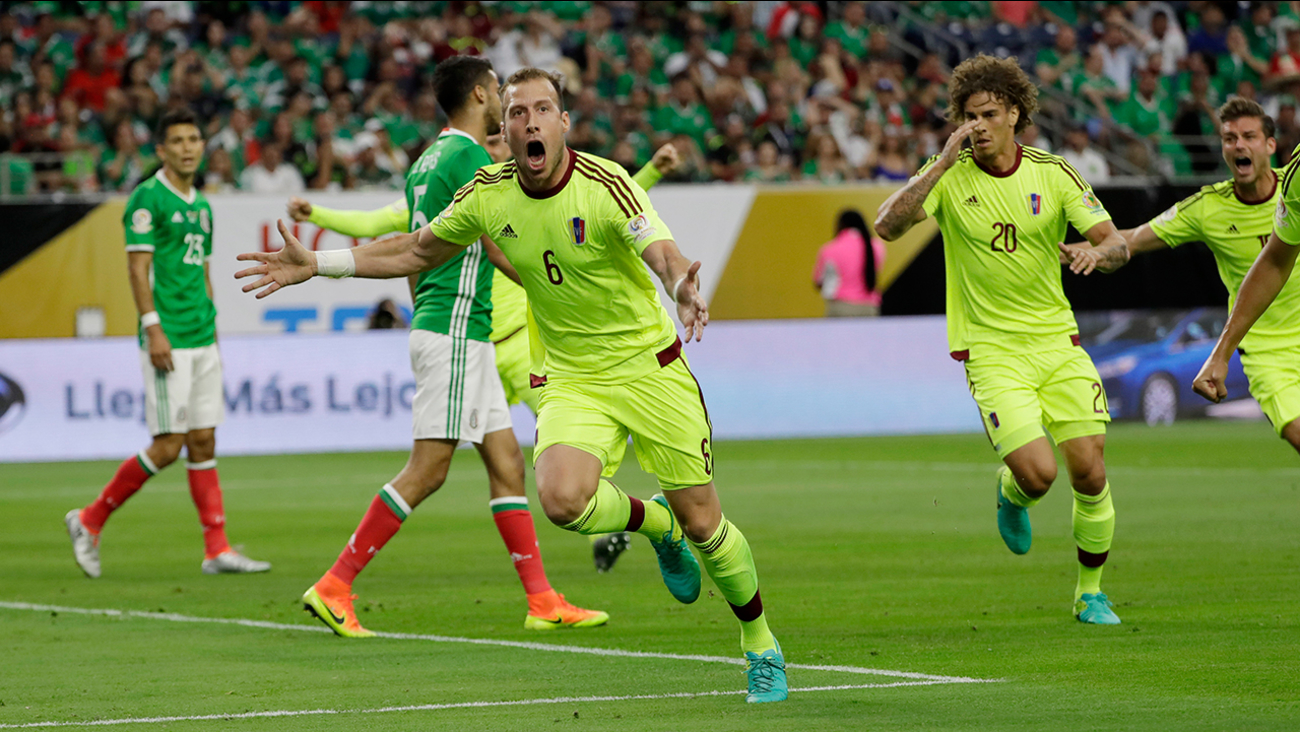 HOUSTON -- Jesus Manuel "Tecatito" Corona's goal in the 80th minute gave Mexico a 1-1 tie against Venezuela on Monday night and first place in Group C of the Copa America.

Corona had missed several opportunities to score before he took on five defenders before firing off a shot from 10 yards to tie it and thrill the overwhelmingly pro-Mexico crowd.

By winning their group, El Tri avoids a quarterfinal matchup with Lionel Messi and tournament favorite Argentina. They're likely headed for an easier matchup with Chile in the knockout round, leaving Venezuela to face mighty Argentina.

Venezuela surprised Mexico with an early goal. The Vinotinto used a free kick to get it in the box, and Jose Manuel Velazquez gave Venezuela the lead in the 10th minute after taking an assist on a header from Christian Santos and volleying it in for the goal.

Venezuela had a chance to take the lead in the 84th minute, but goalkeeper Jose de Jesus Corona saved a bicycle kick shot by Josef Martinez.

Mexico has a 22-game unbeaten streak, which is its longest unbeaten streak ever and has nine wins and a draw since Juan Carlos Osorio took over for interim coach Ricardo Ferretti last fall. The team has scored 16 goals and allowed just two since he took over.

Monday marked the first time Venezuela had given up a goal in this tournament after Los Vinotintos were the surprise of the tournament by winning their first two games 1-0.

Venezuela goalkeeper Dani Hernandez came through again and again before Tecatito's goal and even pulled off a double save in the 73rd minute. His play in the first two games left Venezuela as the only team in the tournament that hadn't allowed a goal.

Mexico had a chance to tie it in the 49th minute, but Oribe Peralta could not get a foot on the ball from 5 yards off a short pass from Hirving Lozano. Another opportunity came in the 56th minute when Tecatito took a shot from 20 yards, but it sailed wide off the far post.

Miguel Layun almost put it in for Mexico in the 61st minute, but this time Hernandez knocked it out of the air and away from the goal. Corona missed yet again a couple of minutes later when his shot rolled just outside of the post.

Venezuela's Josef Martinez took a shot in the 66th minute, but it was denied by Corona.

Mexico took multiple shots in the first half after Venezuela took the lead, including a couple of headers from close range, but was unable to take advantage of any of those opportunities. Tecatito had a couple of chances to score in that span, but was left shaking his head as Hernandez kept Mexico scoreless.

Most of the 67,319 fans at NRG Stadium, where the NFL's Houston Texans play and the site of the next Super Bowl, were rooting for Mexico as a sea of green filled the venue.

There were many fans with hats made to look like Mohawks in the vibrant red, green and white of Mexico's flag. And there were plenty of those flags being waved throughout the crowd, with one group of people bringing a flag that was about 10 rows high and 20 seats wide in Mexico's colors but that featured a huge image of Pancho Villa.

They cheered loudly for their team and voiced their displeasure at Venezuela by booing almost every time the team got the ball on its side of the field.

This was the first meeting between these teams since Jan. 26, 2012, a 3-1 win by Mexico which was also played in this stadium.

A moment of silence was held before the game to remember the victims of this weekend's nightclub shooting in Orlando. The phrases "United with Orlando" and "Embrace Diversity" were shown on the jumbotrons during the tribute.